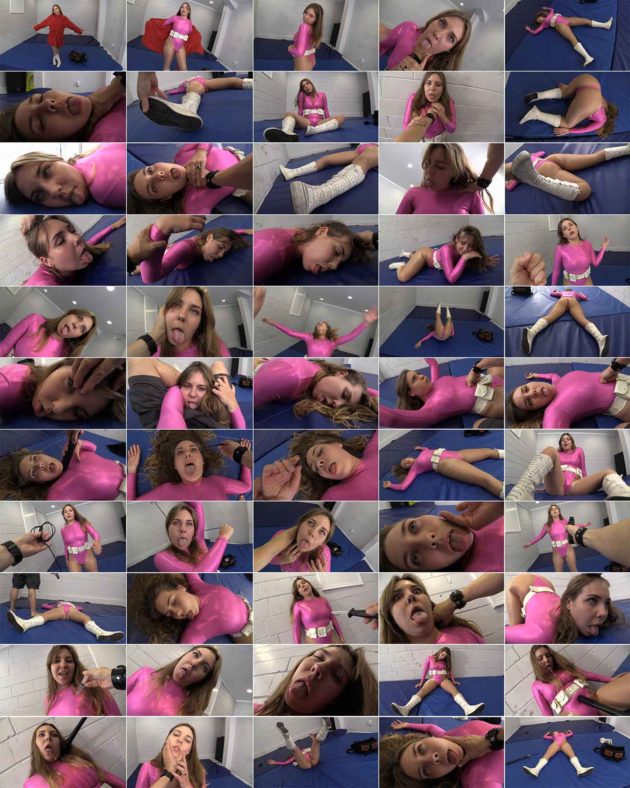 We open on Monroe, wearing a bathrobe, telling you that she’s brought you here to confess her desire you be a spy that you take out as a secret agent. Showing you a bag of toys you can use and unveiling her pink spy thong-backed outfit, she shows off her curvy body for you. She then begs for you to take her out

You grab her neck in a choke hold, watching her face go red as her eyes cross and bulge as she struggles for breath, her tongue lolling out of her mouth as her lids flutter as she chokes. Finally her eyes roll back into her head and she hangs limply in your grip before you toss her to the ground in a heap, spasming and twitching. As she lays there you once again grab her by the throat, gripping tightly as he tongue flops out of her mouth, choking her out until she goes completely still. You check with a little limp play, flopping her arms and legs before rousing her. She slowly gets up before you push her against the wall, thrusting your fingers into her throat, making her writhe and struggle again as her tongue flops and her eyes roll, thrashing until she goes still, folding over herself as she crashes to the ground, her butt high in the air, her eyes crossed.

Once again you grip her by the throat as she lays there, choking her as she fights and struggles for breath, her eyes rolling and crossing until they at last flutter shut, leaving her twitching and drooling. Again you check her with some limp play, her arms and legs flopping as you lift them, drool puddling under her face as her tongue flops

Over and over you take Monroe out, punching her in the face until her eyes cross, laying he rout with an uppercut that leaves her twitching, squeezing her in a neck scissors after making her crawl to you, knocking her out as her eyes roll and cross, punching her belly and driving the air from her lungs as she lays helpless, clubbing her with a billy club in the skull and leaving her twitching on the ground, using it to choke her by pressing it into her neck, bashing her temples over and over until she’s knocked out, using chopsticks for nerve attacks to her temple that make her spasm on the ground and her eyes cross, making her garrote herself with wire as her tongue flops and lolls from her mouth, shooting her at point blank range and leaving her twitching, begging for it to end with shots to the head and belly until she goes limp, stabbing her in the heart and neck making her twitch in place as she drools, injecting her with poison in the neck making her spasm violently, drool puddling on her chest and belly, tasing her in the belly making her twitch and shudder as her tongue flops and drool dangles, before finishing her off with a neck snap that leaves her twitching violently on the ground until you put her down permanently. 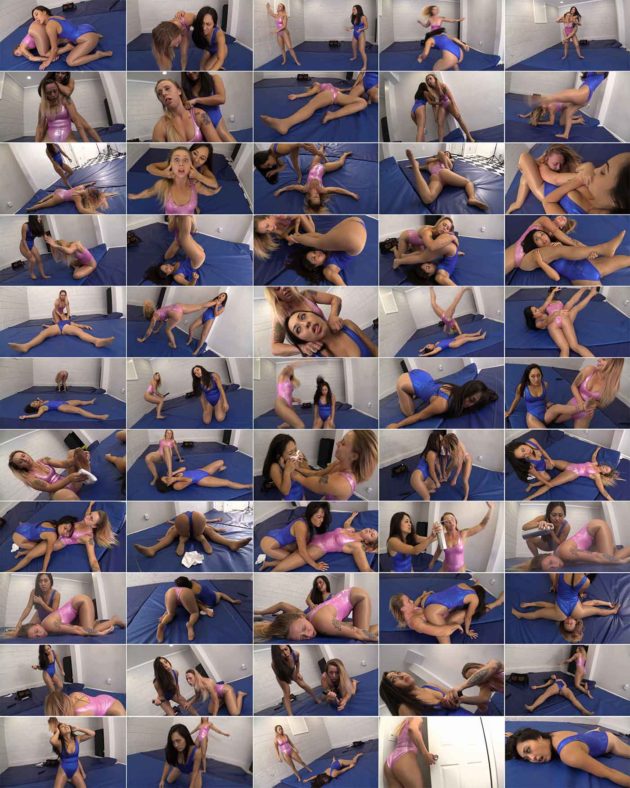 We open on Laynie and Sumiko knocked out stacked against each other with their butts in the air, wearing shiny leotards and tights. As the girls slowly come to and get to their feet, a voice comes over loudspeakers, informing them that they have been abducted in order to settle their rivalry with a battle for freedom in this secret battle arena, where the winner will be able to leave, but the loser becomes the slave of this villainous organization.

The rivals square off, circling each other, talking trash, and then Laynie steps in firing a wild haymaker at Sumiko’s head. The lithe Asian ducks, scooting behind the curvy blonde and leaping onto her back, applying a tight sleeper hold as she wraps her legs to support herself. Laynie staggers and struggles, then drops to her knees, her eyes crossing then rolling before she fades out and is kicked folded over. Sumiko wakes her only to apply a severe nerve pinch than has Laynie reeling, eyes rolling before they flutter shut. Another knockout in Sumiko’s favor, but the scrappy warrior isn’t done yet. Hauling Laynie to her feet she throws her against the wall then unloads with as series of brutal belly punches, making Laynie gasp and grunt as she’s lifted from the floor with each blow. Finally Sumiko chops her in the belly, making Laynie drop to the ground, her ass high in the air.

Viciously Sumiko kicks her in the head, and then yanks her to her feet to apply a thumb attack to the nerve clusters in Laynie’s temples. She thrashes and struggles, her eyes bulging from the attack, but soon her eyes roll and flutter shut yet again, collapsing to the ground in a heap. Perfectly positioned for an arm bar sleeper hold, which Sumiko yanks her into with unrelenting glee. Layne thrashes and struggles helplessly in her grip, her eyes crossing as the pressure builds but soon it’s too much for her and the leggy blonde fades out. Cackling, Sumiko grabs her by the head to haul her upright again, but this time Laynie is ready for her, grabbing her ankles and flipping her onto her back, pouncing on her downed opponent and folding her legs over herself, cutting off Sumiko’s airways.

Sumiko tries to wriggle free but lack of oxygen weakens her and the pressure builds around her throat and neck until her rolling eyes flutter shut and her gasping stops. Laynie collapses against her butt, exhausted, but desperation makes her wake. She pulls Sumiko into a modified neck scissors, wrenching her neck between thigh and abdomen, as Sumiko’s legs kick and thrash as her eyes cross. The cut off blood supply finally takes its toll and her eyes roll back, but Laynie isn’t done yet, hauling her to the wall and thrusting her foot against Sumiko’s neck, leaning in until Sumiko passes out once more. Collapsing to the ground, Sumiko finds herself the victim of a nerve attack to the neck that makes her spasm and twitch, followed up by a series of cartwheel belly splashes.

Things heat up as Laynie dives into the bag of goodies in the corner, taking the billy stick and clubbing Sumiko over the head with it over and over until at last she collapses to the mat, her butt thrust high in the air.

The girl’s take no prisoners as they attack each other with nerve attacks to the foot, chloroform foot smothers, , dual chloroform attacks, knockout spray to the face, sit-out belly splashes, neck smothers, belly punching and Tasers. At last Laynie prevails, leaving Sumiko twitching helplessly on a fallen taser, gaining her freedom while Sumiko is bound for slavery.