“A Sentry Classic” and “Bat vs Schoolgirl” from Sleeperkid 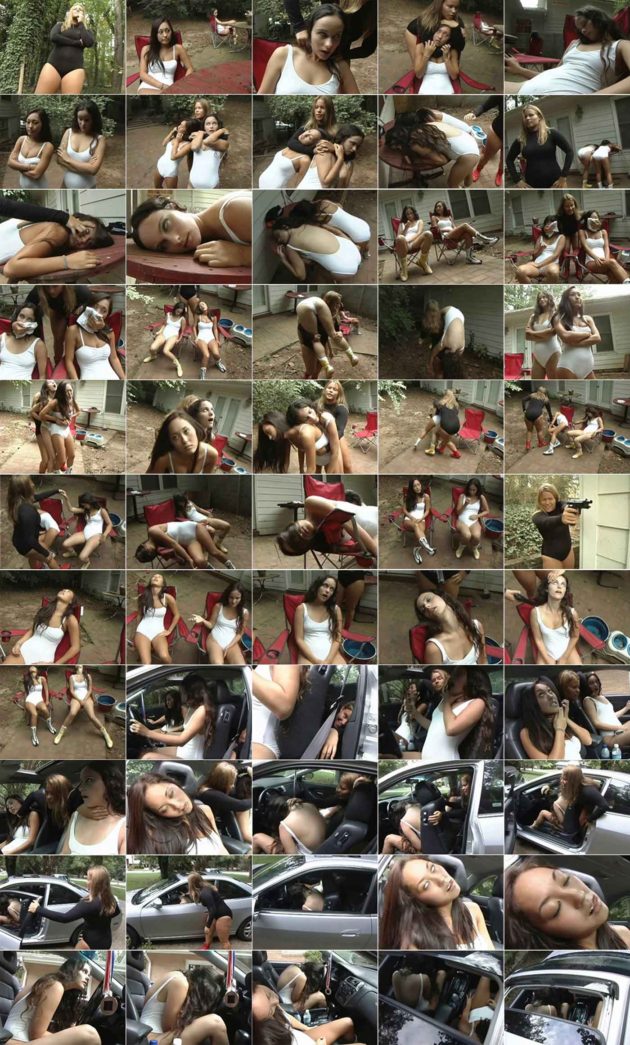 Sumiko and Eliza are lounging, wearing matching white racing suits, complaining about how boring this security detail is. We then see Cameron, wearing an all-black leotard, scoping out the house.
Cameron stalks the duo from behind as they sit in lounge chairs, sneaking up behind Eliza and quickly pressing her thumbs into Eliza’s neck, squeezing on the nerves hard. Eliza’s eyes cross as she gasps then, she passes out quickly.
Cameron then sneaks up behind Sumiko and puts her into a sleeper hold, Sumiko’s eyes flying wide open as she struggles for breath, then crossing as she finally fades out. Cameron then sneaks off into the yard
Now Sumiko and Eliza are up and alert, standing side to side and scanning the yard. Cameron stealthily sneaks up behind them, yanking them both back with twin choke-holds. The sentries gasp and flail as they struggle, bulging eyes crossing as their tongues dangle, wobbling on increasingly unsteady feet until they both pass out still standing. Cameron walks them over to a nearby table, folding each girl over it to leave them there. Just as she’s leaving, the girls start to come back around, so Cameron walks back and delivers twin neck chops, knocking each girl right out, still folded over the table
Next, Sumiko and Eliza are once again lounging in chairs, as Cameron stalks behind them with a pair of towels. She slaps them over each girls face as they suddenly struggle and flail in their chairs, their eyes bugging and rolling as the chloroform works its magic. Finally their eyes roll back as they go still, giving Cameron a chance to haul Eliza up over her shoulder, walking her around the yard looking for a place to stow her. Once that’s taken care of, Sumiko is likewise carried over the shoulder, until dumped behind the house
Next, the girls are standing side by side, scanning the yard. From behind, Cameron grabs them both into a crushing dual bearhug! The girl’s cheeks puff and shudder as their eyes cross, struggling against each other as Cameron tightens the hold, crushing their bellies harder and harder. Finally they pass out, their open mouth dangling tongues, before Cameron hauls them back over to a pair of chairs, flopping the girls down into them before indulging in a little limp-play, flopping Eliza and Sumiko’s arms around humiliatingly
Next, the girls are discussing things as they wait in chairs. Sneaking around the corner, Cameron lines up on Sumiko with a dart gun, firing a tranq into Sumiko’s neck. Her eyes fly wide open then cross as the tranquilizer takes effect, while Eliza remains completely unaware of what’s happened, continuing their conversation. Cameron sneaks up behind and fires a tranq into Eliza’s neck at point blank range, making her eyes roll back as she fades out. For god measure, Cameron fires another tranq into each girl’s neck before leaving them slumped in their chairs
Finally the girls are in the car, eager to end their work day, but from the back seat, Cameron pops up, grabbing each girl’s neck with as choke hold. The guards struggle and writhe in their seats, clawing at Cameron’s hands, eyes rolling as they gasp. Their fluttering lids slowly shut as each finally fades out, going limp in their seats. For good measure Cameron delivers twin throat chops, then uses Eliza’s head to honk the horn, before leaving them slumbering duo in the car. 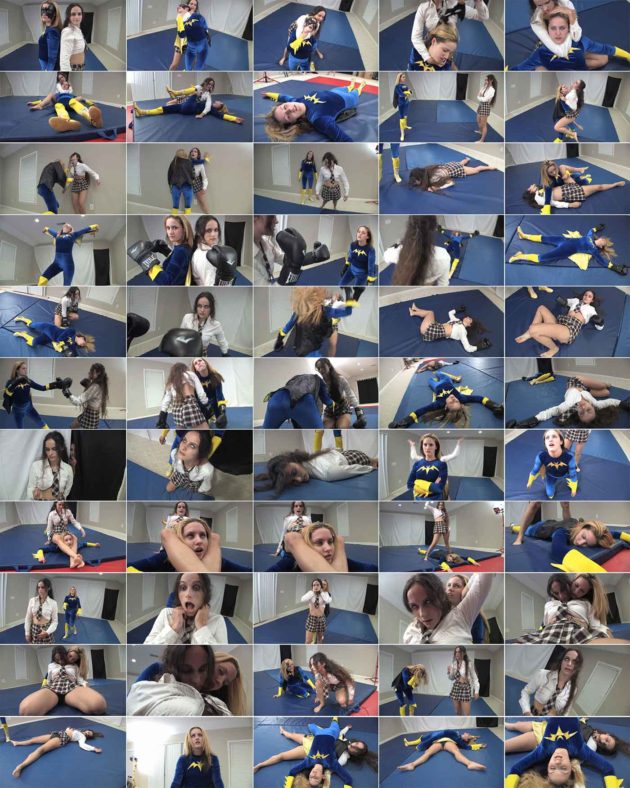 In this re-discovered and re-edited SKW classic, Cassidy and Eliza decide to challenge each other to a series of KO contests, all while dressed in their favorite cosplay attire! The two SKW vets go at it tooth and nail, delivering back and forth KOs via wrestling tactics, boxing blows, and more…leading to a final
sleepy gas/penalty KO, and a sleeping pile of ladies on the SKW mats!