OUT NOW! Action Cosplay: Our Protector 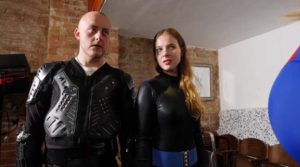 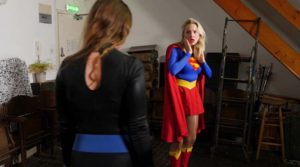 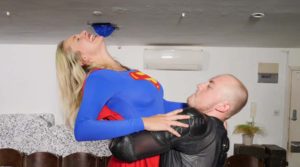 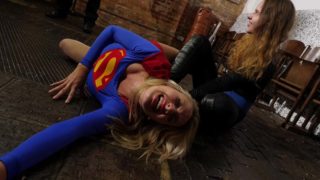 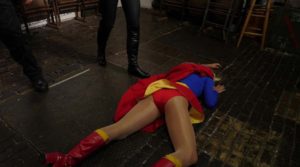 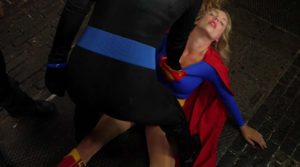 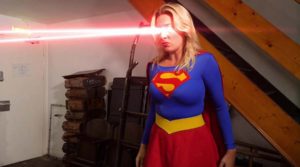 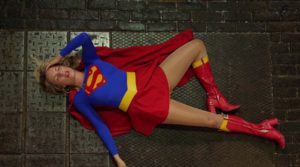 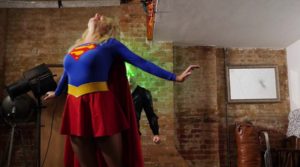 The Mighty Supremacy stands for truth and justice, defending her adopted planet against all threats within and without. In this episode a seemingly symbiotic duo arrive, claiming to want the metal in the planets core, an action that would exterminate all life. Supremacy confronts them, determined to end their scheme.

At first the male attacks but is hastily put down by the powerful heroine, all the while however, both of these intruders seem to be learning more about Supremacy, so by the time the female attacks, the battle is far more even. As things play out we learn that maybe not everything is entirely as it seems. Supremacy for the first time in her life is taking a beating as she is woman-handled in bearhugs and chokes, and her numerical disadvantage begins to tell. Does she have enough to stop these two? And what do they really want anyway?

The gift for early birds this week is admittedly short, and I can’t even give hints, but it is also a gift, which is nice. Just a little sneak preview to get you ready for an upcoming storyline. In order to receive the gift you need to get ‘Our Protector’ within 48 hours of release on Friday.

Job well done. I thought the video intro was quite funny. Recalled Starship Troopers more than anything else…and was it just me or were those some of the NGC actresses in the roles of ‘grateful humans’?

This was a great one. I loved the villainess and Supremacy (BTW NGC, great way to do a Super like name without being simplistic). There was a good mix of action in this one, and liked how the villains adapted themselves. Since this is the first time Supremacy ran into her weakness, maybe we can get a future video with a villainess revealing to Supremacy this weakness in its rock/crystal form hehe.

There isn’t a reply button to the excellent comments about Celestia by @Dr_Mabuse but his post got me wondering….what if Celestia (and possibly Bluebird) have ‘come back’ on the opposite side? The Bluebird from the main continuity had no reason to support Elite Force and Celestia may have come to think (or been convinced) that her loyalty to E.F and Miss Freedom might have been mis-placed.

There are interesting times ahead….

Very interesting thoughts! Bluebird is a complete wildcard as far as I’m concerned. She’s supposedly in the hands of the Crown Prince, so it doesn’t matter who she *really* supports if she’s a slave. Based on where she was when we last saw her in Season 3, it doesn’t seem like she’d automatically side with Elite Force even if she did get free. Celestia’s a different story. Who knows what’s happened to her since her trial by the Dark Superiors? At that time, her loyalties and personality remained intact. Personally, I’d have a hard time with Celestia switching sides, since… Read more »

Thanks Dr! I guess it depends on ‘which’ Bluebird the Crown Prince has; if it’s Bluebird from Season 3 then she might be itching to get even with Miss F at the same time as wanting her freedom. If they have Bluebird from ‘Broken Wings’ then it could be whole different ball game…imagine showing ‘this’ Bluebird what Miss F ‘allowed’ to happen to the ‘other’ Bluebird! As for Celestia, earlier in her arc she was impartial and only went fully to Elite Force’s side when she saw the cruelty of Nina Hellfire and co. Of course it would take some… Read more »

Loved this one. Rob_Hinx provides an excellent summary, so I won’t belabor anyone with more of that. This video inaugurates a new storyline within Action Cosplay that I expect (hope, certainly) will carry on for some time, much as the first story in AC did. The setup made me think of “Red Son”, the what-if graphic novel imagining a Superman who landed in Soviet Ukraine instead of heartland America. Certainly, the language and images in the opening to the video are reminiscent of totalitarian collectivism. “Supremacy” even has a militarist connotation lacking in the name “Supergirl”. Apart from that, though,… Read more »

Well, ain’t life just full of surprises? I’m not talking about the members gift (I’m sure we will talk about it at some point …when the time is right).I’m talking about Supreme. For those who were wondering, and I admit I did wonder the same thing myself, this is not ‘Miss Freedom’ in different costume. Supreme is totally different character. For one thing, she seems…well…nice! Miss Freedom is haughty, conceited and not all that heroic when the going gets tough. Supreme seems to be noble, brave and, in her own words, sworn to uphold truth and justice (although the canon… Read more »

Damn my clumsy fingers….the character is called Supremacy!
(I get it right after the first two paragraphs though!)

Great comments. My only addition is in regard to the actress’s accent. I always heard a little English accent leaking through her Ms. Freedom persona, so I wasn’t surprised to hear what I assume is her actual voice in this release. Great vid!

Thanks Bert!
You’re probably right about Miss F. I’d always assumed the actress was American, purely because that’s the only way I’d heard her speak.

I’m enjoying the secrecy around the member gift when often we get a full breakdown of the main video! In case anyone is curious: CELESTIA!!!

Also, did you enjoy ‘Our Protector’?

Hello! Did starshot actress receive some hits in this one? I would love to purchase this but iam a little complicated now.

Yes, she takes quite few.

Bro. You literally just made my whole 2019 with those five seconds.

That’s right! ‘Our Protector’ is Out Now at http://actioncosplay.com – with a photo set also available in the Photos section.

Folks, *there’s a photoset!* With both actresses!

And the secret gift? AAAAAAAAAH!

I am grinning from ear to ear; five seconds of ‘Oh hell yeah!’.

could you possibly give a hint as to what the secret gift is? I purchase this release myself if I wasn’t royally skint xD

Being as NGC have officially (and kindly) let the cat out of the bag I want to be the first to say-
(Brian Blessed voice)
‘Celestia’s ALIVE!’

christmas? in January? won’t say no to that…

Celestia coming back is huge, excellent news. Assuming that she reappears in the ongoing story, it means that either she didn’t really perish after her trial at the beginning of Season 4, or she did and was resurrected/brought back somehow. Similar things have (arguably) happened to Miss Freedom (I wasn’t sure what happened to her at the end/beginning of Season 1/2), Comet Girl (back after being vaporized in Season 3), Bluebird (thought dead in Season 3, but the Crown Prince apparently has her), and Lady Victory (who seems to have been abducted out of the past despite being killed in… Read more »

this had to have been something that was filmed earlier and just kept out of release? afaik the celestia actress is currently pregnant

First, glad to see my “Starshot in Everything, 2019” campaign is making some headway. Second, very excited to see Miss Freedom enter the Cosplay game in the Supergirl costume we’ve only seen in photos before now. As much as I love the MF character, it’s great to see her play a different one, and I’m anxious to learn how Supremacy differs from the blue bombshell we know so well. Third, it seems like there’s more than meets the eye to this setting/scenario. One of the things I really enjoy about the AC series, especially the first story with Mia, was… Read more »

Supremacy is a very different character to Miss Freedom. Of course both are endowed with great power. and believe in what they are doing, but Supremacy is closer to the heroic archetype.

This looks so good, have always wanted to see Harriet in the classic Supergirl costume and was not disappointed!! Possible the best actress out there to sell peril and she looks absolutely incredible in the tight blue spandex and the S across her chest!! Hope this is the first of many vids of her in this costume, a kryptonite necklace on her in the future…wow!

Great costume. Best she’s ever looked. Nice effects too. Excited for this one, and hopefully at arc of this heroine.

NGC thinks that by giving me Starshot twice in one month that it’ll absolve them of a month where they don’t need to provide Starshot. But NGC would be wrong! I expect at a minimum 11 more Starshot appearances for the year.