Trickster gets information that Jane Dunaway is a good friend of Agent X. He decides that she will make good bait to trap Agent X and sneaks into Jane’s apartment and overpowers her with chloroform while she’s cleaning up. He decides to take some pictures of Jane to set a trap for Agent X, but as he’s taking the pictures, he notices a costume underneath Jane’s clothing. Could Jane Dunaway actually be Agent X? Trickster can’t believe his luck and realizes this could work out even better than he had hoped. To make sure our heroine really is a heroine, Trickster removes the rest of Agent X’s clothes to reveal her skintight costume. Trickster decides to secure Agent X and ties her up.

Soon the heroine wakes up discovering she is in costume and restrained. She demands to be let go. Trickster appears with a camera phone and takes some more pictures. The heroine tries to get free but can’t. Trickster reveals that he knows her identity know and if she wants to keep it secret, she better do as he says. The heroine is terrified as her colleague plays with her body and demands she becomes his slave. She refuses, but the Trickster points out she doesn’t have much choice, before gagging her with a ballgag. Agent X struggles and eventually breaks free. She is drawn to a laptop where she thinks the pictures might be. Unfortunately for her, the laptop is booby-trapped with a Hypno ray. Can our plucky heroine escape this dastardly trap? Find out in this new Agent X episode. 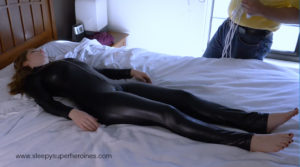 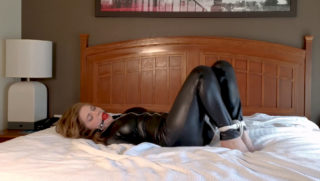 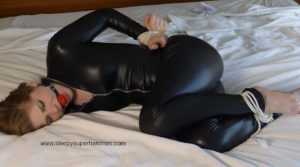 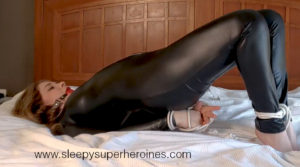 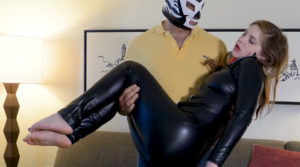 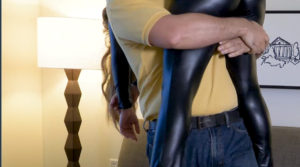 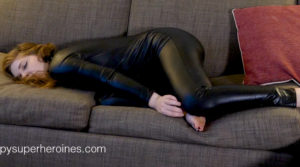 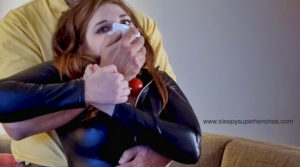 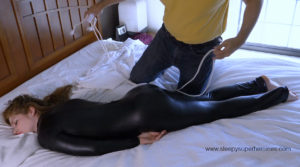 Really?! Now you have my attention just a bit more than before! I have to say I loved the videos I have bought from your store before although they did not have any sexual content I believe. There are few producers here who don’t use explicit scenes and produce the action just as well in my opinion. However I do enjoy a good sexual peril as well and I’m excited to see the previews for that video when you have them ready! Thank you very much for the info!

What ever happened to the scantily clad Canary actress? I was hoping she would appear in more videos.

Hi Mitch, there are a couple of more videos in the works with her.