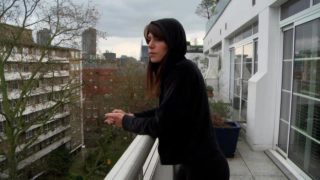 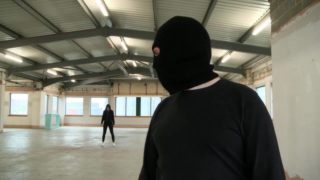 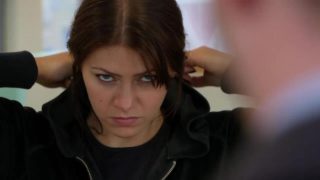 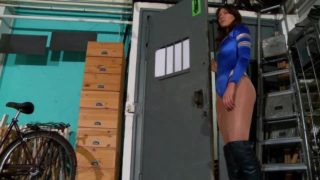 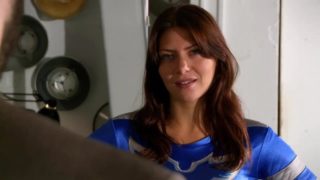 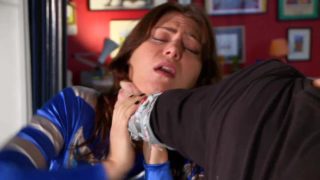 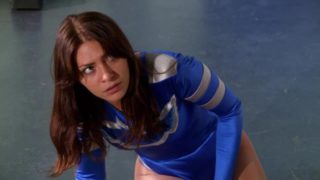 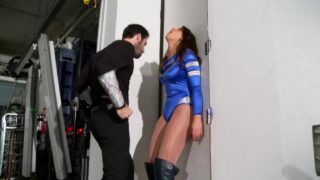 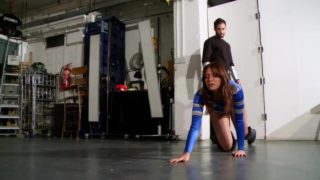 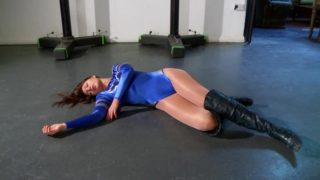 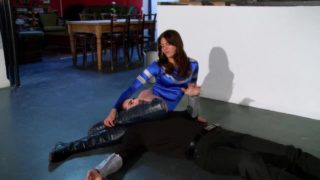 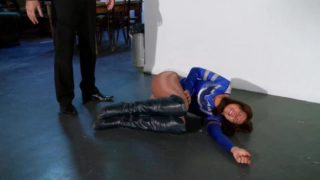 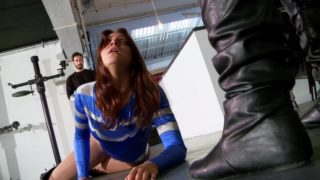 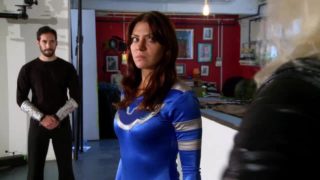 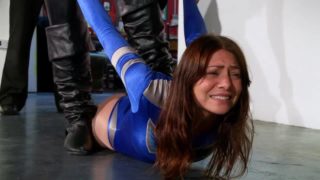 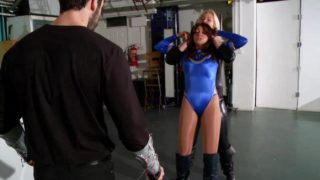 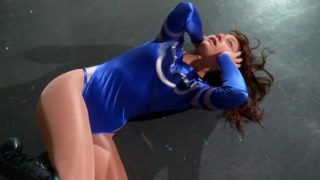 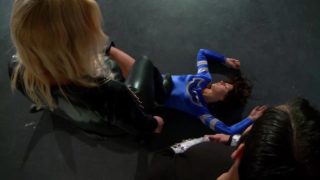 So, going into Bluebird: Play Dead – Part One, I had one question on my mind, and that was, “How fast is Andrew going to kill Bluebird in this series?” After all, he is the world’s greatest serial killer of heroines I love to watch. But this is a two-parter, so you can be relatively sure Bluebird will survive at least through the first film, right? Right???

But this time things proceed a bit differently. Before, Vanguard came looking for Bluebird. This time she’s going after them and she literally starts a list of names with an eye for revenge. She tracks down a Vanguard operative who was in hiding and is protected by two bodyguards. Bluebird shows up in a hoodie (not her costume) and cuts through the bodyguards quite easily before confronting the Vanguard operative.

There’s some story told at this time, so I’ll skip over that and stay with action sequences. Bluebird (now in her costume) tracks down Jacob Saint who shoots some energy blasts, but she is able to dodge out of the way. Bluebird takes the offensive and lands several hard attacks on Jacob and seems in full control of the action. However, Jacob hits her with a laser blast right in her core, but at first, it doesn’t seem to have any effect. But eventually we discover that Jacob’s blast has allowed him to control the cells in Bluebird’s body which enables him to cause all kind of troubles for the heroine.

For example, he can now constrict Bluebird’s throat to make it impossible for her to breathe. Or he can greatly heighten her pain sensitivity which means any attack she throws will injure her much more than her target. This allows Jacob to take total control of the fight and he starts to land multiple stomach punches on Bluebird.

Bluebird melts to the ground and starts to crawl away, but in a surprise move, Jacob activates her “Second Wind” power and she pops right back up. They exchange some shots and then Jacob stops oxygen from going to Bluebird’s brain which makes her incredibly woozy. Jacob follows that with one punch to the face which drops her to the ground unconscious.

By the time BB awakens, the effects of Jacobs blast have worn off and she is able to fight back and she drops Jacob to the ground. He puts him in head scissors, but he is able to infect her leg with his power and cause BB a tremendous amount of pain.

Bluebird attempts to crawl away but stops right at the feet of the just arriving Miss Suppression. And if you think things get better for Bluebird from here on, you just haven’t been paying attention. Without spoiling too much there is a bearhug, more stomach punches, knockouts, and in general, much more pain for Bluebird. And even though she does survive, I imagine by the end of the beating, she wishes she hadn’t.

This was everything the Bluebird 2020 series was. If you liked that, you’ll like this. I also thought this was the most cinematic presentation ever done by NGC. I just thought it was beautifully shot. This was filmed on multiple locations. I think they were pretty much all locations we’ve seen before but along with the longer than normal run time, it just made this film feel bigger. This was a very good start to a long awaited series and I’m looking forward to Part 2. Well done.

This was amazing. Its incredible but bluebird get more beutiful in each movie. Great job by everyone!

Thanks, nice comments. We are very pleased with this one and of course it’s another acting masterclass from Bluebird. She’s been such a great worker for us. I can’t guarantee her every two weeks but I’ve got a fun special video with her coming before Part 2 of Play Dead I think you will enjoy.

Bluebird’s amazing, what a performer, amazing legs and ass! I love when the heroine is completely overwhelmed with the odds against her. So many possibilities with the guy controlling her cells, increasing her pain sensitivity, using her second wind power against her. They could torture her indefinitely! I hope you guys continue to do Bluebird videos for a long time, can’t get enough.

Man that was great.

All involved were great, Jacob has amazing powers and Bluebird does the best she can, she is great.

Thos might be more than she can chew but I am confident on her, I always will.

Can’t wait to see part 2, wish we could see a Claire movie every two weeks, I know … I know … it might be overkill for some, but it is just wishful thinking 🙂

The first of our epic 2-parter. Enjoy!

What type of peril can we expect bluebird to go through

Next Global Crisis
Reply to  daredevil16

Well there are a lot of the usual fight things, chokes, KO’s etc.. but the main villain has a power to control the cells of her body. Not in a telekinetic way of throwing her around, but he does lots of things which cause her an immense amount of pain in quite creative ways. I’ll talk more at the weekend because I don’t want to spoil it.

This one is nice! Who called time out at SHG Media? Like a ghost town over there.

So is this one video or another series like 2020?

Next Global Crisis
Reply to  Paul

It’s a 2-parter, very much in the style of 2020 though and a direct follow on from that.

It just doesn’t get any better than Claire as Bluebird, I can’t wait for this one

What, like into a Camaro or something? I don’t think Michael Bay is directing this.

Tbob, he is obviously referring to a TF from normal clothes to superheroine costume (f.e. like the WW spin etc.), no need to be this sarcastic IMHO – to ask is legit, to reply is courtesy. And by the way, no, Bluebird just suits up, no TF here.

Sorry Dangerman, Bluebird puts her clothes on one leg at a time just like the rest of us. At least that what Markko says as he has already seen this video and knows exactly what happens. No spinning in a circle for Bluebird as that would make her dizzy and she wouldnt be able to fight very well being all dizzy. Not saying she’s a good fighter in the first place, but that’s what we all love about Miss Sarah Harper.

Haven’t seen this one (it hasn’t been published yet), but Bluebird videos are a lot, have some of them and there is not even one TF…. so for the laws of big numbers, I don’t think it happens here, that’s it =) (I actually don’t remember a TF in a NGC video in general).

Next Global Crisis
Reply to  Markko

Markko you should definitely look at this one then (it’s free to download): https://nextglobalcrisis.com/releases/season-2-episode-1/ and she also transforms in Bluebird 2020 part 2, although Rex does ‘help her out of her clothes’ to an extent.

Markko
Reply to  Next Global Crisis

Oh ok I don’t have that video. So at least once, she does TF… Dangerman, go ahead and buy that video 🙂 (personally I am not into that ‘fetish’ 😉 but I admit it’s better to see a TF rather than a normal clothing switch or no changes at all)

Markko
Reply to  Next Global Crisis

Maybe there is a little bit misunderstanding. To have the superheroine costume UNDER the normal clothing, it’s not technically a transformation (I think ? Should ask Dangerman…)

Next Global Crisis
Reply to  Markko

If he wants like a spin trnasformation he should get our first Miracle Maiden video at https://actioncosplay.com

So is her character officially Miss Suppression? I don’t remember what she was called in the mini series.

Next Global Crisis
Reply to  TBob

Yes, she is Miss Suppression, but outside of the Bluebird mini-series we never really delved into who she was or anything, her character is developed much more in 2020 and Play Dead and her real name is ‘Samantha Mayflower’ – Which sounds like the name of a nice person doesn’t it? But she’s not nice. Not one bit.

I for one hope Bluebird is going to come out on top in this one and turn the tables on Miss Suppression. Can’t wait to see!

Kill off Bluebird?? No! This shall not come to fruition!

Please dear god let Miss Suppression finally take Bluebird out for good. I know, I know, we all love Bluebird but damn it if I don’t want to see that blonde amazon evil goddess finally kill her rival.

We have a special release first which will be a lot of fun, but this first part is a February release, so not too long to wait.

Well i think it is the same level. The sweat in Bluebird 2020 Part 1 was real. We shot that on a hot July day and she was certainly feeling it.

Yes the character is possibly the most developed we have, simply by virtue of being in the most videos.

Head explodes!!!! Joking aside, super excited about this; to me, Bluebird: 2020 is still one of my all time favourite NGC releases, as it was as groundbreaking as TR1 was back in the day. The peril felt as real as the knife that was to be used on Suki…but more brutal than ever! Then there was the increased use of ‘powers’ (and matching special effects) making Rex seems like a true monster, the professional TV series style build up, the growth of the characters, the quality of acting and fighting (Clare moving to the next level for me in this… Read more »

The great thing about her is how she has been able to overcome things, you know that she is not perfect and her soul has a few scars here and there but while they have taken a toll, she continues fighting.

The last season really took a tool on her and her last interaction with Miss Freedom was kind of justified, I know there was a greater good involved but leaving a sister like that has its consecuenses.

@LordSnot – Thanks. It is very important to me that we have interesting character development. Its nice that people notice.

@Bert – Yes she is very determined in this one, will it be enough?

Loved the zoom in on her determined face in the hoodie. Nice!

You have done a great job showing that these defeats have taken a toll on her mentally. Not something we see much of. Kudos NGC for adding depth to already great characters.

Haha! Bluebird: Gym Ambush. Poor girl isn’t safe anywhere. She certainly isn’t safe in this video either, I’m very much looking forward to showing you all.

oh wow. I would pay money for an episode with Bluebird in her workout gear (minus the hoodie) getting knocked out over and over; just call it “Bluebird: Gym Ambush” (or something) and I’m on board!

Awesome! This one is must buy for sure! Can’t wait for it.

Well there’s a new villain on the horizon and she needs to do some detective work to find out who the true enemy is. It was a lot of fun to make and follows on directly from Bluebird 2020.

Loved BB 2020, so this is a welcome and unexpected surprise. Who is the ‘unlikely ally’ I wonder. Perhaps Deacon? Her nemesis from the first series. If so, or if it is a male, I hope you add some female villains/henchwomen for him to beat up and shock.