Catwoman is lured into a trap by the fiendish Trickster, who’s fallen on some hard times. As expected, our curvy heroine is quickly captured by the dastardly villain. Trickster’s aim is to sell Catwoman to the highest bidder and return to his life of luxury. In between negotiations, he decides to have some fun with his unwilling captive. Poor Catwoman is subjected to a variety of chloroform attacks especially when she thinks she has the upper hand on the creep. This video features fan-favorite Karly Salinas in a skintight Catwoman costume inspired by the animated series. 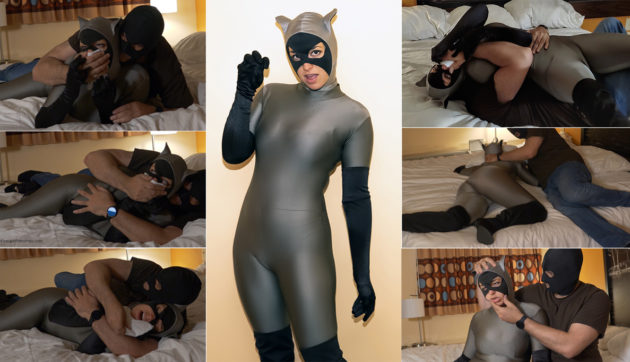 Thanks for your feedback, Giuseppe. I will look into adding this in future videos.

Nice video. It would be good to see an unmasking when Karly returns as Catwoman. That mask looks perfect for slowly peeling off.

I liked the moments in the video when the villain held Catwoman’s head. It seemed as through he could pull back the mask at any moment. (But alas he never did.)

Looking forward to the next one.

Thanks, Heroine Addict. Glad you enjoyed the video. The mask will definitely be removed in the sequel.

You should also sell some photoshoots together with the videos. With the superb costume choices you make i bet plenty of people would love some classic posing shots of the designated victim!

Thanks, FL. I recently featured a timed photoset with the Firestar release and got good feedback on it. Will do more in the future.

The best yet,Karly was amazing!! 🙂

Thanks, Rich! Glad you liked it and appreciated the “chloroform pillow” trick Trickster uses on Catwoman.

Thanks, Odile. Costumes are a huge thing for me and I try to get them right and continuously work on them to make them better. For this specific costume, I had a lot of issues with the mask and tried different ones including latex before I settled on the one you currently see.

This mask is a success ! Indeed ! I love masks and unmasking scenes ! Congratulations again for this costume, and by the way the actress seems to be very pretty. Congratulations to her too, she looks amazing !

One of the most delicious ladies around,SOLD!!!!