Rookie Elite Force recruit ‘Deja Vu’ had come to the aid of another newbie Candy Race as she struggled against two overpowered Darkheart thugs. The tide was beginning to turn in the heroines favour when a Darkheart Captain arrived and swung it back to the bad guys having initiated an explosion on the other side of the city. Michael Sampson needed Candy to help deal with this catastrophe, leaving a brave but endangered Deja to take on three villains at once. 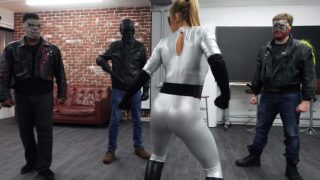 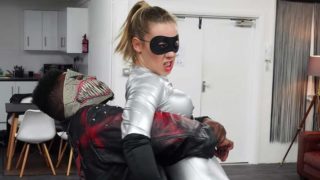 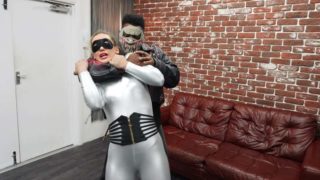 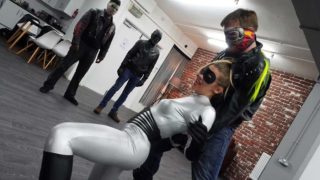 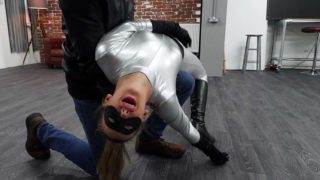 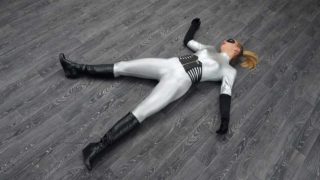 Deja Vu proves to be a very skilled martial artist and her power gets more use as she tries to keep the fight going her way. However, as exhaustion begins to set in, so her power wanes and starts to prove a hinderance. Luckily for her, the Darkhearts can’t seem to detect what her power is and consider her of no interest, just as they had after scanning Candy. However the rookie heroine shows pride and inexperience all at once by goading them into attacking her further. This proves a mistake as the Captain breaks Deja over his knee and a pounding ensues. Is it going to be one mission and done for Deja Vu? 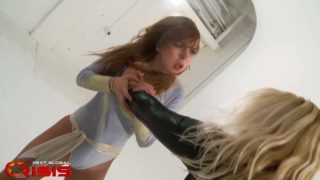 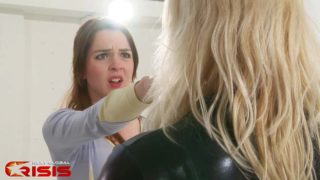 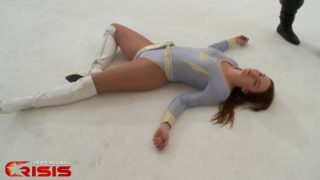 A huge treat for members this week as we delve into the archive and get alternate takes from the smash hit ‘Celestia’s Bad Idea’ from 2014. Celestia decided to take on the incredibly big and strong Miss Suppression and she certainly regretted it. These out-takes have never been seen before and include an entire alternate shot of Celestia’s KO’d defeat. Will be deleted 48 hours after members email goes out on Friday.

I wanted to mention something that I don’t think anyone has touched on. One of the things that really makes this video great is the pacing. Yes, Deja-Vu is awesome and can sell the moves like few others. In addition, the fight scenes are paced really well. Some heroine movies, even if they had a talented actress, it’s like punch or kick… stare, gloat, chit chat,… punch or kick, …. stare, gloat, or chit chat…punch or kick. Not this video. It’s go go go… loved the pacing.

One move I really wanna see done to her is the throat punch. I’m sure her reaction to it would be amazin.

Yeah, throat punches or chops would be a cool addition as I don’t recall seeing them in an NGC film. Could be forgetting, though. Plus, I haven’t seen every film in the catalogue, so maybe one was used in a vid I haven’t seen yet. Anyway, regarding Deja Vu specifically, I just got a chance to see this and I have to say that the actress is really impressive. Her movement and athleticism makes the fighting believable in a way that you don’t usually see in this genre. Also, like others have said, her super power is really cool and… Read more »

I loved the new actress. I hope she makes many more videos with you guys and soon. I do have to say though I would appreciate a new costume. This one looked more like a training suit or something. I dont like the thing covering her stomach, or the mask. Im actually all for a mask just a higher quality one. Something tight that hugs her face. I hope her new costume is still a bodysuit, something along the lines of Suki’s wet-look suit in season 2 or Angels original. Im looking forward to seeing her again. I would love… Read more »

She’s hot, she’s amazing at taking hits and she takes a good beatdown! I mean, I saw some NGC clips with very poor fight choreo, in this one she takes an amazing amount of punches, knees and kicks. Really a great clip, hope to see more of her. And damn, show some bellies! (and kick some crotches too!)

Yea this was the best film I’ve bought from NGC for a while. I’d echo everyone’s compliments about the choreography and the performance of Deja Vu. There are some nice rarer peril parts like kneeling on her throat and a hand-stamp – those were appreciated. Only thing I’d add to the wish that the mask be removed from the outfit is that the gloves be removed also (they actually did mysteriously disappear for about 20 seconds of of the film…!)

I guess there’s nothing for it but to hop on the bandwagon. It’s hard to say anything that hasn’t been said already. Deja Vu gave an absolutely stellar performance on every level and I really do hope we get to see a lot more of her. The way she remains defiant the whole time while still remembering to portray that she’s being worn down in a believable way is a rare thing indeed. Her attitude and spirit are amazing and the way she moves is mesmerizing. I don’t say this lightly, but she may just be my new favorite heroine… Read more »

Loved it! What an amazing power!!! And is incredible how simple is done and how easy is for us to understand it. The girl is a knockout. She is great in every way. Hope we get to see more of her soon. My only complaint is the mask. If she needs to hide her identity maybe you can use some paint for her eyes. Thats my solution but i know these guy will do something cool with it next time. Keep the good work!!

Great video! I just got a chance to watch it and wanted to drop a favorable review here, but I see I’ve been beaten to the punch. Co-sign a lot of what Tim Caine and JohnG say below. After two appearances, Deja Vu has already become one of my favorite heroines in the NGC roster. She’s a good actress, excellent at giving and taking punishment, and looks great in silver. Love her power as well, and it’s nice to see how it works, both to her advantage and ineffectively once she starts to tire out. The plot is straightforward as… Read more »

At 9:36 into this episode Deja Vu says it herself “There’s nobody like me.”

DING! DING! that’s is a completely accurate statement. At least in terms of this genre. She is truly a unique talent.

Read closely NGC – YOU HAVE THE MOST TALENTED FEMALE PHYSICAL PERIL ACTOR IN THE GENRE WITH DEJA VU. This may divulge spoilers below, so be forewarned. I’ve bought a lot of videos from a lot of vendors and I’ve seen a lot, but not this collection of talents before. She is simply incredible in terms of her physical ability. Her acting is great too. While this may be tedious for a small minority, I’m going to enumerate some of her strengths that I believe set her apart from others: 1) Expert martial arts ability: it seems she is quite… Read more »

Okay, NGC you’d better hold onto Deja Vu. She is already got to be considered one of the best. And a must buy for every video she does from now going forward. Let’s see: Great body – Check. Solid Actress – Check. Costume looks hot – Check. Fighting skills – Check Sells a beatdown -Check, check double check. This episode is really really good. Possibly, dare I say it… yes, I dare. Could it be NGC’s best episode ever? It just might be! One thing that you guys did which I think was really really smart on your part was… Read more »

Thanks, I hope to keep her involved, might be a bit sporadic as she’s a busy girl which is hardly surprising. Regarding the mask she will have a better one in future. It was also partly that she is in training gear so it fitted with what we were doing. Our plan is to give her a designated costume, hopefully that works out and it is better than this one, although this one has turned out well.

Personally, I dig the costume. Looks great on her. She is far from hard to look at.

Chris
Reply to  Next Global Crisis

“a designated costume”?
I doubt what she’s clad in already could be improved on.
She filled it out well

Instant buy. She is amazing

Yes, I am really excited for this one. Deja Vu is a fantastic new heroine (based on the strongest debut in ages) and I really want to know what these Darkheart cosplayers (sorry, neo-Darkheart faction) are up to. Add to that great fighting, peril, and interesting powers… can’t wait.

She looks good. Great body, very sexy outfit.
I hope It’s not “one mission and done” but at the same time I’m looking forward to seeing her manhandled choked and squeezed (especially in that outfit)
I like the 3rd snapshot.

This one looks good. Love her reactions.

Looks like an excellent video, but everybody needs to get the member’s gift, because that was a great one. Oh, and you should buy the original video, too.

yes more deja vu! she is my favorite heroine. love the catsuit, mask, ponytail everything.

Of course, this appears to be a must buy and I hate to comment before the video….but you seem to have a phenomenal heroine here: great fighting skills, engaging attitude and some compelling physical peril acting as well.

Hoping the video translates as well as the previews!