UltraGirl makes the journey through the multiverse looking to recruit herself to help fight against an evil tyrant that has invaded her Earth. Unfortunately for our UltraGirl, the new UltraGirl is not a hero in this universe… Our UltraGirl finds herself in a life and death situation as she is attacked physically, mentally, and sexually!

Sort of off topic Rye, but any chance we can get a video starring Nikki who plays WW on the Power Vixen photo sets? She’s got a killer bod.

I’m a bit of a late arrival as i only bought this video yesterday. Overall i liked it. The best thing for me is Alicia C. Moon as the UltraGirl Prime. I loved both her looks (besides her obvious beauty i love her hair, it’s magnificent!) and her performance. She is a natural. Perhaps unlike many here, my favorite part was the fight segment. Alicia is very good at selling hits, especially when she takes face punches. Personally i wished the fight segment had been the dominant part. I feel the sex parts were overextended since it was very repetitive.… Read more »

An amazing film come to life. These two ladies have incredible chemistry and each plays her role to perfection. And the dialogue…Well done ! Best parts are when Ultragirl gets bearhugged into unconsciousness and then kissed and then fondled into unconsciousness and smooched again… my heart was pounding…absolutely SPECTACULAR!
We can only hope there are more adventures to come!

And THAT is the ultimate question:
What is going to happen to her next?

May i ask if there are facepunches thrown at Alicia’s UltraGirl? Some of my favorite moments in a F/F heroine video is to see the heroine receive facepuches in a prolongued sequence.

Lucy and Alicia in one movie!!! I watched movie yesterday. Very good movie, as always. I’m waiting for new releases 😀 Thank you RYE.

I second that. Alicia in this super suit is a dream come to life!

Cheers to whoever custom ordered this and kudos to Rye! This was an excellent video. D_Hoffryn called it efficient, and I would agree in the sense that everything feels well balanced: no wasted/nor excessive shots. The pacing is really good. The best part though is the standout performances by Alicia and Lucy. They both seem really into playing their parts (especially Lucy who makes a wonderfully sensual villainess) and the dialogue is very well done. There’s one little moment, for example, when Ultra Girl seems poised to make a big do goody speech, and Lucy interrupts her with a well-timed… Read more »

I agree. This is an amazing movie. Loved it from beginning to end. Lucy is always fantastic and she and Alicia are very good in this.

Well, that’s annoying. I just tried to get the video but it seems Netcode doesn’t accept Mastercard. I hope it’s on clips4sale already or I’ll have to wait until it is.

nevermind. I managed to get it by going through paypal. sorry to bother everyone

i would like ti see Lucy again it that costume <3

loved the sexy tight bear hug the evil UltraGirl gave to the good guy ultragirl great! Long, elevated along with the ass grabbing plus the wedgie excellent views of her face and ass and chest to chest crushing mmm ^_^ glad to see more female villains

Last edited 11 months ago by bearhuglover94
7

Lucy has never looked better, her make up and costume are fantastic. Would love to see her take on a mob of guys in a Hands of Man situation in that costume!

Compared to Rye’s other recent F/F release with Alicia and Lucy (“Eternal Prisoner Part I”) I liked this one better. It’s – positively put – a very efficient production. There’s not more exposition than absolutely necessary, and there’s not really something like a set. Just two women in costumes (side note: I think that evil Ultra Girl’s shoes don’t fit too well with the rest of the costume, but that’s a minor point). The movie works, due two the performances of the actresses. In my opinion Lucy even deserves more credit here than Alicia. She’s – once again – simply… Read more »

Hey rye I was just wondering when this glorious movie will release from this sale where she is in the blue and silver costume https://www.heroinemovies.com/the-rye-and-ph-winter-sale-most-titles-26-95/ it looks so good

I need to see this come to fruition 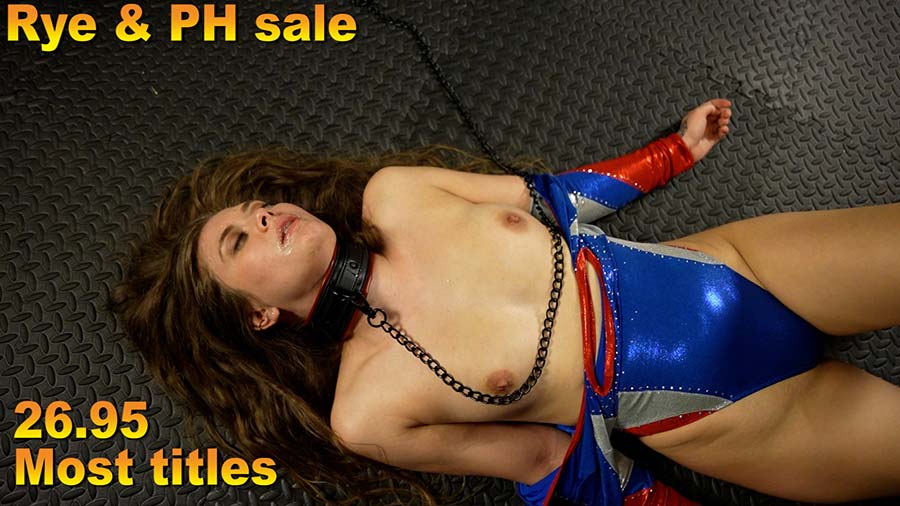 I agree. These both look great. Maybe about time?

The shots of Alicia in her UltraGirl outfit are from her first release….The Jailer.
But, I’m also looking forward to the release of the second movie. That silver and blue costume looks like it was painted onto her beautiful body.

Loving all the F/F videos recently. This one looks awesome. Instant purchase

I am a simple man, I see Alicia C Moon I buy it.

Simple, perhaps. But a man of good taste regardless.

That was amazing!! I love Alicia C. Moon and Lucy Westenra’s performances. I loved it from beginning to end.

If you make it, they will complain. LOL

Not that I wish to steal Alicia’s thunder but whatever happened to Alina Lopez. She was on an amazing run of videos with Rye and then all of a sudden crickets. Please tell me she hasn’t retired from the genre.

I think I’ve read somewhere on this forum that she is only doing her own productions now. It was an info from SHL if I remember it correctly.

Last edited 11 months ago by D_Hoffryn
2

Technically she retired from working with companies and is doing her own thing now. Her wishes however if you’d talk to her on her OF she does do customs

I loved this movie, I wish the ending could show her in an evil corrupted ultra girl costume making out and getting sexually dominated by the evil ultra girl. Overall one of my favourites if not my favourite of this year. Hopefully whoever ordered this can do a similar concept as a sequel or a prequel of her getting dominated physically and sexually and it is the reason she needs to get help . 10/10 and Alicia is a bombshell , we need more

That would certainly would have been a great ending. I also like the idea of Ultra Girl being Evil Ultra Girl’s evil sex slave. I love preequels as well and I love your idea.

Even better. That would be as amazing.

ya i hop they take these notes to heart in the future. the corruption endings need a little more time showing the personality change to evil. like showing her do something really evil and a sex act after

Amazing! As a fan of F/F, wedgies, bear hugs, hi-cut leotards and OTS carries this one had it all! Cheers to the person who commissioned this! And Alicia continues to add so much to this genre. She’s incredible!

I agree. Alicia was amazing in this movie along with Lucy, I also hope to see more of Alicia in future movies.

how was the bear hug scene?

Great! Long, elevated, wedgie, and excellent views of her face and ass.

Hey guys – I am still waiting for these 2 videos that were teased back on Sept 27. Anyone seen any traces of these out there?

That’s what I want to know. I’ve been patiently awaiting that super girl video. That actress was amazing in her first run and seriously needed a second video ASAP.

Any new Rye UK film would be great 🙂

You’re right. Those look interesting. What happened to them? Any news, any release time?

Still waiting for eye of the beholder sequel

hey what kind of ending does this have? is the good Ultra Girl corrupted into being evil? killed?

I can’t wait to see this especially after seeing there is a corrupted ending, I love when it happens. Does it show her in a new costume, and shown as evil or just fades to black after showing she has given in after being corrupted

this is cool, will probably pick it up

i do wish that when they do endings like this, they would linger on the corruption a bit more. like seeing that personalty change and then having her act on it by doing something sexual or evil

Hey Rye, still planning on making the old PH stuff available as a single download like you mentioned a few months back? I’d be quite happy to give you my money!

F/F orientated vids from Alex – Lucia – TBFE – and now this, in rapid succession, have I died and gone to heaven? Take my money now, please xP
2022 couldn’t have started better.

I wish this trend would last. It probably won’t. Let’s enjoy it as long as it does.

Ooh my GOD!!! Nothing aginst this girl shes cute but why is it everytime they find a model they use her in like 6 videos in a row. How about some variety? I get you may scheduel a girl for a few days and knock out a few videos but you can space out releases. Waiting for the next great Wonder Woman model. Seems we havent had one to look the part since Kacey Preston.

What model would you have for your custom ? Oh that’s right you don’t have one

By the way, I just watched Pig. Fantastic performance.

Thanks I’m trying to get my Pig themed custom video going with rye films.

You get what you get when you get it.
I know it’s frustrating, but if you’re tired of the new favorite you’ll just have to make do somehow.
Honestly we’re lucky to have so many returning performers.

“you can space out releases”

In other words, they should spend the money but then sit on the video and not recoup their expenses.

Not only that. Since he and his upvoters can’t bear the thought of the same girl in consecutive releases, all of the rest of us should be denied the option of buying these videos. WTF dude?

This looks awesome!
Question: do they kiss near the end of the video, when the fucking happens, and if so, for how long?
Does the kissing happen often throughout the movie, or just a little bit?
Thanks!

What is going to happen to her next?
Sorry. I couldn’t help myself. How many releases have we already had in 2022 and I haven’t seen this vital question posed once?! I’m tired of waiting for it.
As for Alicia…..don’t stop me if you’ve heard it before because you have but….that ass, those curves, the eyes….sigh.

Last edited 11 months ago by Nixon
7

Anything with Alicia in it is an instant buy!!

I think I spent $400 on superheroine movies in 2022 so far. Does anyone know if they are tax deductible ?

“why doesn’t this movie have what *I* want”

That’s the Cereal Dave take of the day.

Yeah I’m getting a bit sick of these. Always the same girl, same costumes. She apparently hates wearing pantyhose. Never any chloro. Just too much.

I’ll be frank, I prefer if there were more “Japanese Female detective” like stories. I like the costuming more (it’s a lot simpler also) with panty hose (bare legs even), heels, secretary gab or even a catsuit. I like this genre but we should get more “human” heroes, it lends itself more easily to peril.

I love the jap girls that squirt out milk like a garden house. It’s such a ridiculous prop but so sexy at the same time. A crossover movie would be epic.

This is a custom order, so I assume the person funding it made calls like that.

It seems Rye and Lucia use similar talent (which I like), I wonder why this intersection never happens with TBFE now? I’d like to see Layla, Ashley and Bella in Lucia and Rye