OUT NOW! “Forever Enemies” from Next Global Crisis 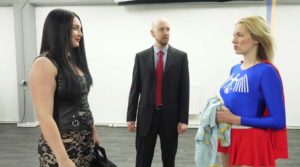 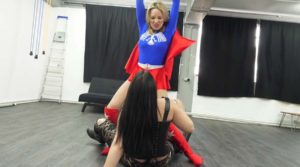 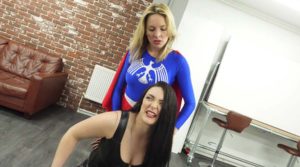 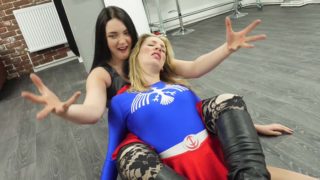 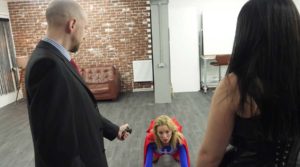 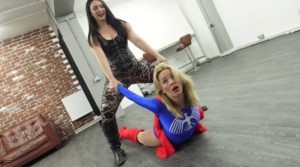 At the same moment The Deceptress was walking into Violetta’s lair, so Miss Freedom was walking into a meeting with old ‘acquaintance’ John Roman. The history between these two is chequered to say the least with Roman and his brother at different times setting out to destroy Miss Freedom. They teamed up briefly to bring down the Dark Superior invasion, but once again enmity is the order of the day. Miss Freedom is looking for information on the 7th Dimension and at first Roman obliges, but he agreed to the meeting for his own reasons… To give Miss Freedom the chance to duel with Celestia’s murderer, ‘The Dominator’.

When the powerful Superior villain joins them and shows off Celestia’s costume, Miss Freedom cannot resist taking up the fight, just as Roman planned. The heroine starts well, her original powers broadly restored should make her a match for any Superior, but the two villains have brought some 7th Dimension tech to the party which controls Miss Freedom and removes her ability to attack. At once helpless she is beaten and humiliated by Dominator who places her in a succession of painful holds in an attempt to break her heroic will. Miss Freedom needs to buy time to work out a strategy, but can she rely on the mercy of her ‘forever enemy’ John Roman? 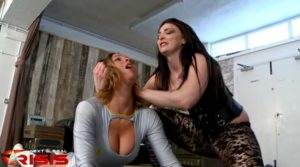 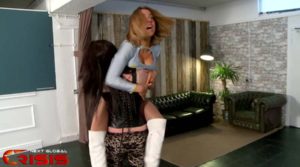 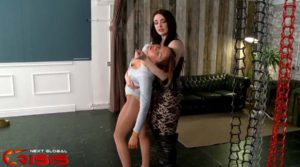 As the Dominator looks to crush Miss Freedom in ‘Forever Enemies’, we look back at the battle that sparked it: ‘The Trial’ between Celestia and Dominator. For members who purchase ‘Forever Enemies’ will receive over 3 minutes of unseen takes and angles from ‘The Trial’, footage no Celestia fan can be without. This video will disappear 48 hours after the member email is sent out on Friday.

If there’s one heroine I enjoyed seeing beaten more than any other it’s Miss Freedom and if there’s one villainess I enjoy seeing beat a heroine more than any other it’s the Dominator so my hopes for this release were high and , as usual, NGC fail to disappoint. Miss Freedom needs info about the 7th dimension so she turns to John Roman for intel. John (who’s looking very devilish with his shaved head and beard) doesn’t give much away although he does have a curious turn of phrase; the Elite Force girls are being “harvested’. Don’t people normally feed… Read more »

Don’t have time to write an extensive appreciation, but Rob has done a great job here and like him, I really enjoyed this episode. It’s epic-length (25 minutes) and Miss Freedom spends much of it in the Dominator’s harsh embraces. Miss F is virtually defenseless for a long stretch, but there are several minutes of legitimate combat in which they’re pretty evenly matched. Without strong actresses, this one wouldn’t have worked, IMO, but both ladies are more than up to the task. Like Rob, I didn’t “get” the device used on MF at first, but it seems clear enough from… Read more »

Thanks for the compliment Doctor.
The 7th Dimension are starting to remind me of the ‘time forces’ in the old Sapphire and Steel series; they appear, mess things up (seemingly at random) and then vamoose only to re-appear somewhere else. Are they agents of chaos or is there method to their madness?
It’s going to be fun finding out.

I’ve never seen Sapphire and Steel… is it good? The only thing I know about it is that Joanna Lumley was in it shortly after her stint in the “New Avengers”.

It’s definitely worth a look Doctor, Joanna Lumley was brilliant as Sapphire and David McCallum (Ducky from NCIS) did a great job as Steel. There’s not a great deal of action, it’s more cerebral than physical but the concept; elemental agents fixing gaps in time and reality is fascinating and, a bit like our friends from the 7th Dimension, not everything is explained.

Miss Freedom is nice but I’m getting this for those tiny morsels of Celestia! My Celestia. How I miss that gorgeous lass.

With the still image of Dominator looking at her hands and from what I saw in the trailer, I was really hoping we’d actually get a boob claw hold, but sadly *spoiler alert* it was not to be…

Very glad to see Miss Freedom again, and facing the Dominator! It was inevitable that these two would cross paths, it seems. After the thorough humiliation Dominator visited on Spectrum in the Championship ring not too long ago, I think Miss Freedom is in for some serious suffering. Meanwhile, John Roman reappears… rocking the bald look so popular with comic book villains. Glad to see him return to the story after his absence in Season 4. Malicia named him as her source about Virtue’s unsavory past in “Corruption”, so we knew he was still around, and the circumstances that led… Read more »

A double dose of Dominator and Miss Freedom, once again, in deep doo-doo.
What’s not to like?