“Freedom Costs” from Next Global Crisis 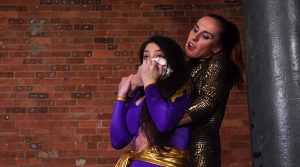 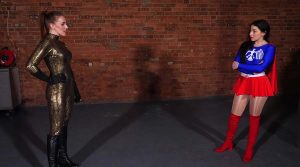 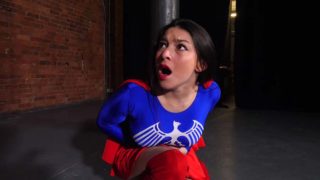 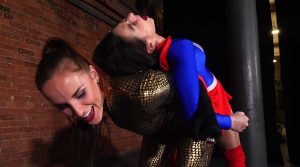 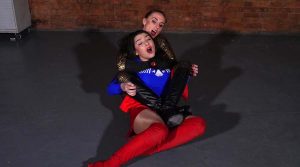 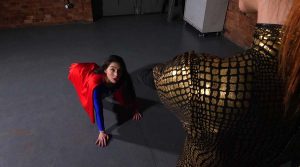 After the defeat of the Dark Superiors, Elite Force have been regrouping and recruiting. However, nobody could have predicted the return of Comet Girl. Though the Harbinger apparently destroyed her late in season three, she’s back with no recollection of the Harbinger or in fact anything of the past year. With no Elite Force heroines on hand to see her demise, Comet Girl’s amnesia is accepted and she is placed back on active duty.

Enter Malicia Divine… The psychotic ex-TV news reporter who blames Elite Force for her uncovering her wickedness. Now set on revenge, Malicia has just acquired a power ring to control the minds of her enemies. As the villainess is about to receive the stolen artifact Comet Girl intercepts, but is soon unconscious via a chloroform rag. When she wakes Malicia has her dressed as her real quarry; Miss Freedom. Malicia tests her new powers on a hapless Comet Girl who is beaten, squeezed, KO’d and toyed with mercilessly. Can Comet Girl get out of this misery and warn her leader? 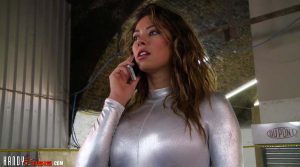 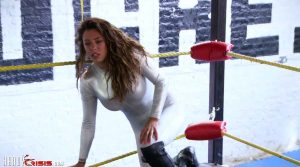 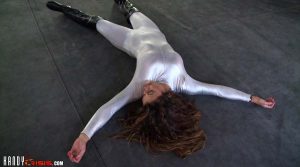 This week’s Member Gift, to accompany the release of ‘Freedom Costs’ starring Comet Girl, is unseen Diva v Hit Woman from ‘Kandy Crisis #8’. Diva is resplendent in a silver catsuit that accentuates her voluptuous wonderfulness perfectly.

This unseen footage will come with your purchase of ‘Freedom Costs’, for the first 48 hours.

Can I just also say that I love Malicia? She’s incredibly hot, of course. But her demeanor and her attitude are just amazing. I hope NGC uses more of her, maybe even as more than just a villainess!

Finally picked this up today, and LOVED it! I already posted what I think of Malicia, and of course she continued to amaze in this one. As for Comet Girl, it’s been a while since I’d seen anything with her (my bad!). I’d forgotten how sexy she really was. I really enjoyed watching her as much as I did Malicia. I think CG has one of the sexiest power poses, and it was awesome to see her standing all confident and proud only to double over in pain from Malicia’s stomach punch. Seeing her in the Miss Freedom outfit was… Read more »

This was great! Malicia is a wonderful villainess. The only thing I would’ve liked is to see Malicia use her powers a bit. Can’t wait to see her in action again!

This was one of the best superheroine videos I have seen in a long time. Comet a Girl looked stunning in Miss Freedom’s attire! Her utter destruction at the hands of Malicia was devastating (in a good way), and the acting by both ladies was incredible! The action was non-stop, the peril incredible—overall, an exceptional video and, in my opinion, the best Comet Girl video I have seen (and I have loved all of her videos to date). Great work, NGC!

Sorry to be off topic and I might get lots of down votes for asking this, but oh well. Is it possible somewhere down the road for any of the NGC villainesses to be cast in a heroine role? Not as part of the main storyline but maybe, for example, as Miracle Maiden. There are a couple “bad girls” who I am (more than) curious to see as a heroine, Malicia being one of them. So far I only bought one vid with her. But as much as I bought that one for Starshot (and of course I will continue… Read more »

It’s a fair question, it nearly happened a couple of times in the story but we had to swerve for one reason or another. I’m not sure though, some people really suit heroic and others villain roles. If you met Malicia for real you’d find she’s barely acting at all!

Maybe Malicia is played by a temporarily underemployed super-villainess. That would explain much… Seriously, I’m also really intrigued by the prospect of “Malicia” playing a heroine, especially in another continuity. Or maybe an “anti-heroine” who’s better than the villains, but still not someone you really admire. She could retain her devilish charm, but not actually do (too many) villainous things. Of course, another option is for her to reluctantly side with the heroines against a common enemy. This could even happen in the current story, if the Darkhearts or Dark Superiors or 7th Dimension or whoever decide to target her… Read more »

Love those ideas too, Dr!

Mike3
Reply to  Next Global Crisis

Thanks for the reply NGC. I had to LOL at that last sentence! Some people are just natural for their roles. However, after watching this video it seems like Malicia would have no problem at all pulling off Miracle Maiden experiencing bitter defeat! But if the villain role is all she’s going to play then you’ll hear zero complaints from me as long as she is in the film 🙂

I want to see Comet Girl in less clothing or a sexier costume. Not a fan of this Mrs Freedom suit at all. No buy for me…

Did we at some point over the last few years have to re-sign up to NGC? Never got an e-mail, and haven’t gotten one for a long time.

It’s a good idea to do so if you aren’t getting them. Or you can email me with your address and I will see what happened.

Sometimes emails might bounce or your provider spams them for unknown reasons and stops altogether. Yet I still manage to get Chinese criminals pretending to be Apple telling me my iphone got hacked, despite never owning one.

decibel
Reply to  Next Global Crisis

Ok, thanks, going to e-mail you right now. I sent the message via the contact us button on your page.

I replied, hope you got it. Check spam if not!

decibel
Reply to  Next Global Crisis

Yeah, I got it, thanks, I just forgot to reply in here but it worked.

Malicia is an awesome character. Her acting is so over the top, but she does it on purpose and makes it work so well. Very talented! And a beauty as well obviously.

I lost it when she goes “uh-oh” in the alternate ending!

Wow, it seems like everybody wants a piece of Miss Freedom. Comet Girl is just the latest heroine (Angel, Infinity Girl, Bluebird) to find herself dressed in blue and red for the pleasure of some villain who wants their hands on the real thing. Maybe Malicia will work her way up the ladder to the divine Miss F, like the Masked Man eventually did. The reappearance of Comet Girl is spectacular news–she’s such fun character–and the circumstances of her return are intriguing! Is she the real CG? Can she be trusted? Does it even matter, if she’s destined to become… Read more »

I mean, you certainly can’t blame them for wanting a piece of her. The cocky, pretty leader of the squad? I think that mind control ring might be exactly what Malicia needs to get Miss Freedom at her boot… Let’s see how it works on Comet Girl!

I’m counting the hours with you.

I find an interesting aspect of re-dressing the heroine in the costume of another is what happens to the heroine’s abilities?
Does she maintain her current powers, or suddenly don the powers of the other heroine she’s dressed as…or does it end up as some kind of “hybrid power”, creating some strange combination of the heroine’s normal powers and those that the other costume represents….OR, are all powers cancelled out?
…very interesting, this game of “Costume Roulette”. 3>)

I made the time to watch this one straight away. It’s awesome! NGC has put out some high quality videos in recent months, but I think this is my favorite in awhile. We know there’s a chloroform scene, and it’s *really* terrific. Chloro is my jam, so I was hoping it’d be a good one, but I wasn’t anticipating how good it would be. It’s long, but not too long, and Comet Girl acts it out spectacularly: the initial surprise and shock as Malicia envelopes her, then recognition of the danger she’s in, vigorously writhing for a few moments, followed… Read more »

I agree. Malicia is great.

Damn, this one looks like it’s going to be a winner!

Are there low blows for the heroine in Freedom Costs?…How many?

The downvotes are from NGC fanboys? It’s not a criticism, it’s the truth, there’s no low blows in NGC videos.

There are some, just not too often. Like in S3 Ep5, Bluebird gets straight up kicked in the crotch by Eliza Rose; Bluebird sells it so well, much better than the stuff from TheSuperheroines which are known for their low blows. Or NGC Championships Deceptress Destroyed, she gets kicked in the crotch from behind, but she sold it like she got punched in the back or something. I think there are a few more, but there are just my favorites that I can come up with right now.

This is the second weekend where I CAN NOT EVEN!!! Thank you so much NGC for these two incredible films!! I am really glad to see the members gifts starring ms Diva so I will certainly be picking this one up when it comes out!

Oh, sh**. I love Ms. Freedom. She fills her suit very nicely. But if anyone else was to don that outfit, I would want it to be Comet Girl.

Comet Girl dressed as Ms. Freedom? Perfection!
Can’t wait for this one to come out…and Diva as the bonus gift?!
BEST PACKAGING EVER!
Thank you, NGC!

Thanks, this Diva footage would be just about worth it on it’s own, crazy. I really enjoyed making this one, both girls get completely into it.

There are so many things to be excited for here. Comet Girl, Malicia and a ring to control heroine minds? Friday can’t come soon enough!