Heroineburgh is a PG-13 live-action superheroine video series based in Pittsburgh, PA. The first season (13 episodes) creates an entirely new universe, revealing the origins of 20 superheroines who gain their powers from a dark-energy meteor bombardment. In this concluding episode to Season One, they form a League to battle forces arrayed against them in the city and across the nation. The evil Black Faction then forms to oppose the efforts of the heroines by discrediting them with the city and the police.

In Season Two, fragments of the dark meteor have fallen to earth, transforming more women into evil and chaotic supervillainesses. The Heroine League must stop them, as well as contain the efforts of the Black Faction led by corrupt detective Drake and his wife Vaporia. Each episode involves several story arcs in the tradition of superhero television shows.

The superheroines continue to represent various ethnicities, professions, sexual orientations, subcultures and neighborhoods in Pittsburgh, with many real locations used for film shoots. Action, comedy, drama and combat, all in the finest spandex and tights!

Episode 14 is now on sale at HEROINEBURGH (http://www.heroineburgh.com) in the Season 2 page of the Video Store. Price is $9.99 each, and the video is approximately 30 minutes.

Here is the trailer for Episode 14.

A short description of Episode 14 follows below, as well as some stills from the episode.

In the kickoff episode for Heroineburgh Season Two, devious Drake and violent Vaporia execute the Black Faction plan to release the supervillains from prison.

Meanwhile, an awkward account dreams of an exciting criminal lifestyle inspired by Selina Kyle. She finds herself transformed into the mischievous latex-clad Sintilla, with amazing strength and the power to see into the future. Will the superheroines on duty – Arctica and Fianna – be able to counteract Sintilla’s crime spree?

And then the Black Faction attempts to capture and subdue the raging antiheroine Red Gina to turn her to the dark side and convince her to work against the Heroine League. Will she succumb to their evil persuasion, or will Vendetta and Etherea arrive with enough time to bring Red Gina to her senses?

This episode begins Season Two of Heroineburgh, and features 4 heroines and 5 villainesses.

Episode 14 is now on sale at HEROINEBURGH (http://www.heroineburgh.com) in the Video Store under Season 2.

Below please find some photo stills from Episode 14. T-shirt of the new ‘Anti-Heroineburgh’ graphic is available in all sizes by contacting info@heroineburgh.com. 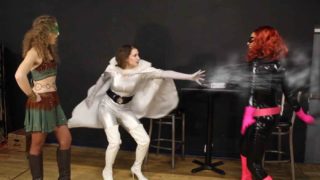 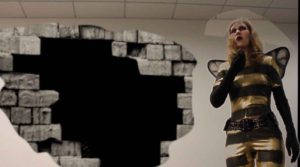 Devorra is about to unleash her mind-control pollen after breaking out of jail. 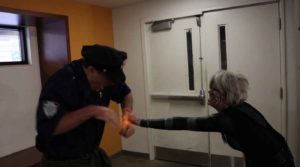 Dysphoria cruelly melts the flesh of the prison guard. 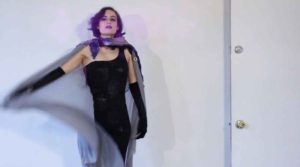 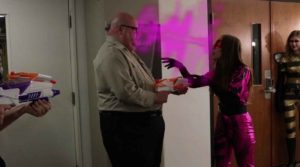 Mesmera uses her hypnotic powers on the guard. 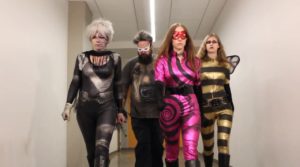 Four of the villains who have broken out of the prison. 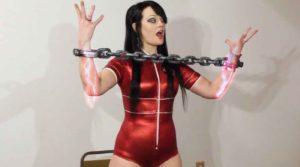 Red Gina powers up as she is captured in chains. 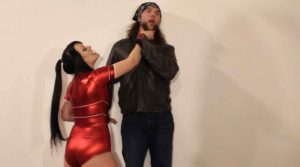 Red Gina crushes the throat of one of her attackers. 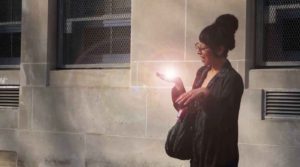 Accountant Cynthia finds a glowing meteorite in the alley. 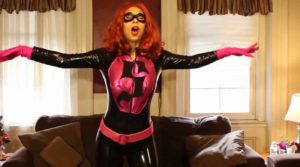 Cynthia is fully transformed into the sexy villainess Sintilla. 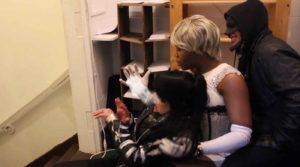 Vaporia chokes Gina unconscious as her partner Drake looks on. 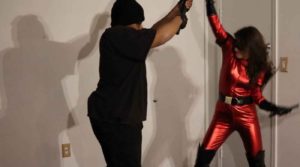 Vendetta battles one of the Black Faction’s thugs. 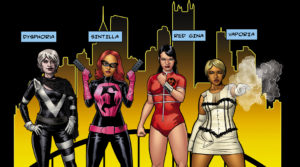 I have made a mistake ! Grrrrr !!! You should read : Heroineburgh takes us furher away… and not take us… grrrrr !!! Sorry !!! I apologize in advance for every mistake I don’t see !!

Amazing movie ! The first season was a great introduction, with very well built storylines, beautiful heroines and characters with well developped and deep personalities, progressing in captivating adventures. And now, Heroineburgh take us further away in action, perils, special effects, and romance… for a low price ! Now, an heroine is mistreated, and the end of the movie is not really optimistic. A new and impressive character is even introduced: the beautiful and malevolent Sintillia ! Each scene is well played by all the actresses and actors, and each detail of the movie is well thought. What does Heroineburgh… Read more »