OUT NOW! “Miracle Maiden: Who Are You?” from Action Cosplay

Miracle Maiden has vowed to protect Earth with her considerable powers, and it has made her rather cautious. With a new super-powered woman on the scene calling herself ‘Supreme Girl’, Miracle Maiden is concerned about the potential for harm. This new girl seems to bring trouble wherever she goes, and to that end, Miracle Maiden has called a meeting to find out more. 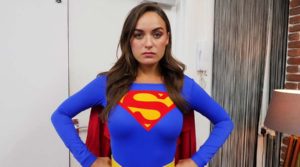 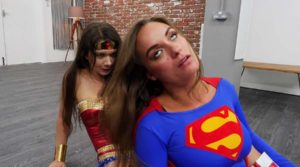 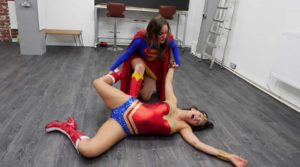 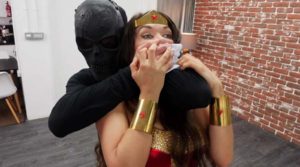 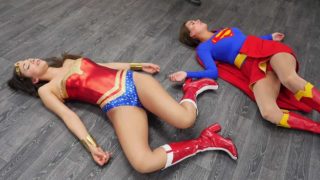 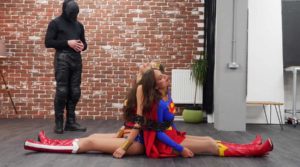 Supreme Girl arrives and appears to be just as suspicious of Miracle Maiden as the Amazon is about her. The distrust leads to fighting as each heroine tries to prove dominance over the other. Supreme Girl starts well, taking down Miracle Maiden, but the tables are soon turned, and having proven her point over a KO’d Supreme Girl, the Amazon goes to leave. But the lady in blue and red isn’t finished and the fight continues until it is Miracle Maiden becoming desperate. Now both severely weakened their true enemy appears, and this dark force exploits their weaknesses perfectly. Eventually tied together and helpless, what is in store for the once mighty Superheroines? 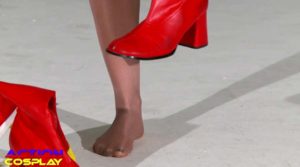 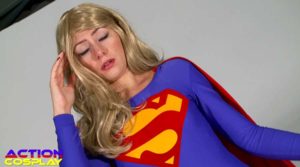 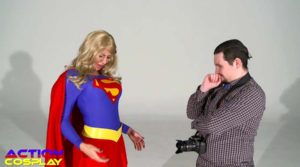 Over 3 minutes of unseen footage centred around putting the Supergirl costume on, getting dizzy from the dimensional shift it causes, and then some more unseen footage of the boob inflation. Yep, not sure what we were all smoking that day, but the bad guy decides to use his powers to blow up Mia’s boobs to excessive proportions. So here is more of that. Make sure to get ‘Who Are You?’ within 48 hours of release on Friday.

This was an awesome release. I loved Miracle Maiden and SG, they had a great fight with one another and loved how they both got hit with their weaknesses. Props to SG for conveying the worry and fear that she had seeing the crystal. Also love the use of a little chain bondage in this one, always a fan of that.

This is a solid release. I particularly liked Miracle Maiden’s ‘warm up’ moves at the beginning, she looked fierce doing those. In fact she’s pretty fierce all the way through. Superior Girl is on much, much better form here that in the NGC Championship. She delivered her lines really well and I thought her attempt to extract a pledge of allegiance from Miracle Maiden was superb; it had a ‘Kneel before Zod’ feel to it. I also really liked the way Miracle Maiden called the villain at the end ‘you fiend’. I’ve said it before but I love the spirit… Read more »

And the member’s gift was worth the price of the release by itself!

Well the preview had the selling aspect that’s for sure ! Well it was interesting A small point though at the end all tied up I can see why the necklace made SG character pass out but being changed for Miracle Maiden didn’t quite click with me ? ? Did love the pleading part . . . It will kill me EXCELLENTLY performed I personally was hoping for more of a back and forth battle was in my glory a Miracle Maiden was being multi hammered and hoped that visa versa would have been in this instead of a little… Read more »

To echo what Dr Mabuse said, what a great little release this was. A short but very sweet and enjoyable film that features two great actresses that are well worth the money. I’ll start off by stating that I’ve got a major built in bias towards the Supreme Girl (SG) actress who I think is fantastic in nearly every regard, particularly when playing the role of Spectrum in the NGC universe. So you might want to take this with a grain of salt but I think she was better than Miracle Maiden in this one. Both as an actress and… Read more »

Acting and fighting were solid, not too much to say. Probably my favorite part was when Miracle Maiden has Supreme Girl in a body scissor depicted in picture 2 above. The aspect I liked about it was that Supreme Girl was struggling from getting squeezed, but then MM does one final squeeze after a line of dialouge and SG reacts precisely to it. MM squeezes and then SG groans in response to the aditional preasure that she just can’t take anymore, rolls her eyes, and relaxes her arms. Would also like to mention that the camera man/director looks like he’s… Read more »

Hokey smoke, that was an extraordinary video! I don’t have the superlatives to cover how much awesome is packed into this release. It’d be worth it at twice the price. Both actresses really bring the drama in their dialogue moments, contributing a lot to the intensity and gravity of their fight. The combat scenes are similarly ferocious, and the enthusiasm with which they attack and taunt each other suggests that their grievance is as much about fear and jealousy as it is concern about what the other heroine brings. A lot of excellent combat elements from my POV, especially Miracle… Read more »

Even though MM’s chloroform scene isn’t labeled as quick here, is it still solid? With good aftermatch shots? She always knows how to look good while playing unconscious, with her mouth open and stuff.

What about the Spectrum actress? What are the highlights of her scene? This one looked great; it’s just you’re chloro talk here worried me a bit.

*is labeled as quick
*aftermath shots
*your chloro talk

Chloro scenes are a serious love of mine, and I thought both of these were high quality. Miracle Maiden’s last video was virtually a chloro showcase, so maybe the memory of those lengthy, generous scenes are influencing my language here. I’ll describe each of the scenes in this video in more detail. Miracle Maiden is seized from behind by the villain and pulled back a bit as the cloth covers her mouth; you can see the angle/vantage from the preview picture. Her struggling lasts about 15 seconds, and it’s very physical, really well done. After “Battle for the Crown” this… Read more »

An absolutely superb explanation. Much appreciated. Will be buying this for sure. Thank you.

OUT NOW! I hope you enjoy this one, two of our best in a lot of trouble! http://actioncosplay.com

I cannot stress this enough but the actress playing Supreme Girl (Spectrum in the NGC world) is such an amazing talent on screen when it comes to portraying a character. There’s just a great deal of emotion in what she says and what she does and it brings so much life to the character. And that begging scene? Oh, that’s the stuff of gold right there. That’s quality acting.

This looks great. Love the pic with them tied up together.

gotta say, my first thought was “sweeeeet mother of love :O ” looks like another fantastic entry to Action Cosplay

Fantastic! Looking forward to this one 🙂 I love the current Miracle Maiden and always a fan of SG character. Plus some chloro and Kryptonite, and chains, very nice 🙂 Can’t wait to buy this one.

Uh, wow. I was already beside myself at the prospect that these two actresses would face each other in some fashion in the main continuity (as Lady Victory and Spectrum) and now we’ll see them together in iconic roles. On top of that, a villain “exploits their weaknesses” and chains them… wow.

Nice! Love seeing my favorites as different characters. Will check it out.

So loving all of this. Can’t wait for this to come out

Oh my stars and garters