My name is Chris, and I’m starting up the studio arm of my cosplay/photography projects, to be called Strong Style Studios. I know I’ve been asked: “Why jump into this niche genre with tons of producers?” – and the answer is simple: I’m not doing this for the money, I’m doing this to put out videos that fans of the genre, whether they like belly punching, bearhugs, backbreakers, bondage/AOH, etc., will like and are interested in. As a fan of the Next Global Crisis series, the aim is to film in almost the same manner, with my own tweaks and styling.

While this is my first time filming in the genre, this is not my first time filming in general; I’ve got an AS degree in Mass Communications (which includes the realm of field video/film, television production and journalism), and have filmed independent wrestling shows in California. Going even further, actually this isn’t my first time in the genre, either; I’ve done photoshoots with Kristina Hess, Kristin Ige and Asami (from Heroine Movies’ Asami series), with a fair amount of peril shots thrown in for good measure. 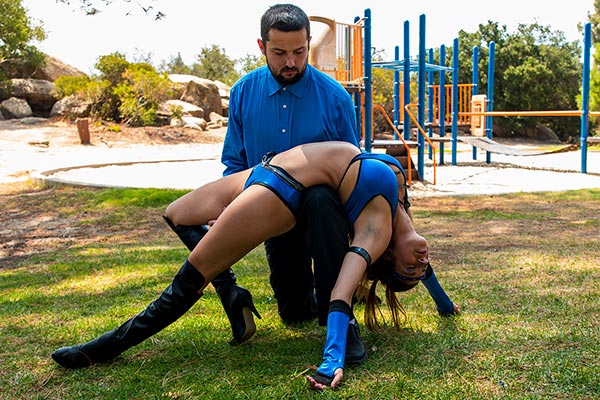 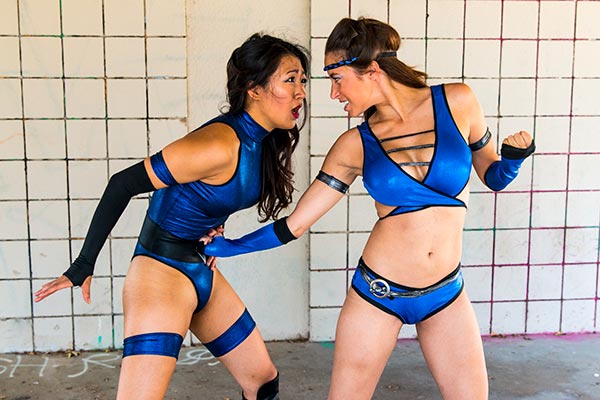 That brings me to why I’m posting here: I’m giving those interested a chance to pitch in and be a part of this project! I’m aiming at filming later this month (the 23rd, or thereabouts), and I’m giving that chance in two ways: six-to-eight minute custom action shorts at $250 per short, or the option of putting in for different elements of the longer video I’m filming the same day, which will vary in cost. Everyone who puts in for either a short, or for an element in the larger story, will also get the full main video once it’s completely edited and ready for release, along with any photos that come along with the finished video.

For those who are fans of the Asami series, the actress from that series will be playing the role of Sapphire, who is fighting an enhanced, black-clad drone remotely controlled by a villain out to destroy the heroine… 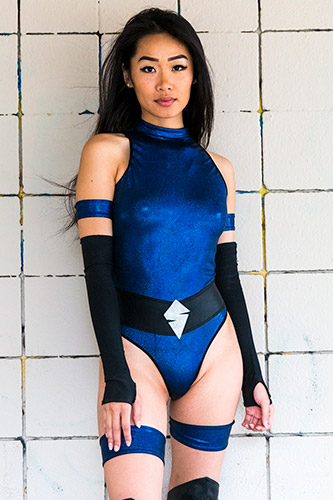 While I’d like to give the option of different costumes, bondage and the like, I’m currently limited in equipment (and the main video is being filmed outside), so looks will be limited to the Sapphire costume, and PG/PG-13 elements.

If you’re interested in helping this project come to life, or want to see something of your own, please reach out to me at strongstylephoto@gmail.com! 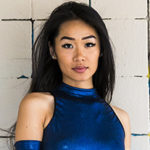 Any news on this video?

Hi Everyone!! I like to jump on here every so often to see how things are going and I miss you guys!!! I think Chris is going to be a GREAT producer and he is such a sweetheart to work with so I’m sure he’ll have happy actors on set 🙂 I’m excited to see what he’s got up his sleeve! As for “Chained”, don’t worry, it didn’t break my spirit, just decided I needed to lay low with the CTL debacle, and will come back once everything is settled there and I can produce without any backlash. I actually… Read more »

Hey what’s going on with this ? I’m ready for some Asami

Hi Chris!, I’m a fan of NGC and HL, too. Glad to see someone trying to work with those ladies again. I think I speak for all of us when I say they are missed. I see Amanda Santella’s name has been brought up a couple of times. Would be great to see her again…especially if you could get her to do her Moonstar character again. One of my favourites from that whole series. If you’re taking suggestions, some other actresses that came in late during HL’s time that I would like to see again would be; Kaye L. Morris,… Read more »

Hi Chris, welcome! I’m also pleased to see another producer enter the scene with an interest in the genre and an appreciation for Next Global Crisis and their style. I’m a huge fan myself, and if you’re making something along those lines you can definitely count on my support.

So happy to see a new producer on the scene and as a lover of the PG13 peril I’m really excited to see what you can bring to the table. Sometimes I weep for the future of the genre because based on what I’ve heard from producers on this site, the products that are released and this new customs only age we’ve stumbled ourselves into, I’ve wondered if the genre is on a sustainable path. And then new producers like Lucia (well technically not that new), Locked Basement and now you makes me hopeful that the genre might just have… Read more »

Do you (or will you) have a website to get more info?

Yes, working on the website this weekend! Mainly I’m looking at domains, hosting and then all the plugins and layout stuff, before piecing it all together.

HI 🙂
Will Amanda Santella also be an actor here??

Possibly! If I can get a hold of her and she’s still interested in the genre, then yes, I’ll look into booking her…

Another great girl was the actress who played Firestar for Cross The Line Entertainment. Would be awesome if she returned to the genre.

I think you’re referring to Shannon Reynosa.
Great actress who looked amazing in everything she did with CTL.
Would be cool to see her in this genre again.

YES! Shannon was beautiful. I hope we can find a way to bring her back to the genre

Hahaha. Well I was trying to avoid using her real name but yes. I was referring to Shannon. She was drop dead gorgeous dressed as Firestar with her long legs, short white mini skirt and exposed midriff. I probably would sell a lung to see her dressed like that again. Not to mention that this genre suffers from a dearth of ebony colored actresses.

Interesting idea. If by chance you can, I’d love for you to get anything with Lindsay Lamb and/or Tiffany Chase. Those two were pretty much the hottest women HL ever had. Anything with them, for me, is must-see.

Good luck and all the best in your shoot Chris! I’m an big AOH belly punching fan, so hopefully there’s going to be plenty of that!

hope you include dizziness, eyerolling. the only thing that could convince me to buy a videp

good luck with your shoots Chris! hopefully some AOH 😉

Well, you gotta admit, for a second there you got our hopes up with that Kristina Hess photo 🙂 But it does seem that trying to produce “Chained” broke her spirit once and for all in this genre. Anyway, if you do track down any of the Heroine Legends actresses (those productions were one of our big inspirations for Heroineburgh) don’t hesitate to rope ’em back in. I’m surprised nobody asked you about Amanda Santella – I think the last studio to film her in this genre was Hidden Vault, and Finn says he’s done with his productions soon. OK,… Read more »

I am a big fan of heroines and I have no doubt that you will succeed, hopefully the fight scenes are not bad like Kickasskandy. Let them be with new actresses because it’s hard to see Coco and Amber McAlester all the time. Greetings from Lima, Peru.

Hi, hopefully your vids will include Female-female lift and carry. Specially OTS and cradles. Cheers

Excited to have you on as a producer and I would love to see more ngc style videos as well. I really liked the storyline they had going. Would you want to do more individual story videos or shared storyline? Also, I love Asami, what other actresses are you thinking of working with?

At the moment it’s probably going to be individual storylines that may culminate in one bigger storyline. That’s all too far in the future to speculate on, though. As for actresses: there’s a few in the LA area I’m looking at for a few characters… but I’d definitely love to shoot with Coco, maybe Amber McAlester. Originally my goal was to shoot with some of the HL ladies, but just about all of them have left the business, which is sad… because I don’t think I’ll ever get anyone to fill that two-piece costume like Kristina does/did (seeing as it… Read more »

If you ever get to shoot with Coco, I’d love work with you on an Ayumi/Sapphire + Coco short!

That backbreaker picture looks pretty epic. Would love to see something as brutal looking like that on film.

And Ayumi is a great choice. the sapphire costume looks fantastic on her.

Well, seeing as the script at this moment has a backbreaker in it… I’m definitely going to try to replicate that shot!

Though, it’ll be without my ugly mug in it (yep, that’s me with Kristina bent neatly over my knee)… which is a good thing!

Will your films include Low Blows to heroines? I noticed NGC doesn’t do much of that.

It’s very… very possible. Not something I’m a big fan of, but if there’s enough people that like it and want it, I’m all ears.

Hey everyone – I’m online and can take questions if anyone has them. Thanks to HM for letting me post on here! As an update, the official shoot date is set: September 25.

Can’t wait to hear what the community on here has to say, and then to get down and shoot…

You mentioned you did photoshoots with kristina hess, do you think you’ll ever film with her?

Unfortunately, probably not. She’s out of the genre, running a successful real estate business. Trust me, I’ve tried to get her, because she looks amazing in the costume I shot with her in (the old Thorne costume)!

What about Kristine Ige? Is she out of the business as well?

Yeah, she seems to be out of filming entirely (she was acting in other stuff alongside working HL stuff), unfortunately. I’d love to shoot with her again.

I mainly used the shot of Kristina and Kristin in a posed fight to show what I’m capable of. Hopefully that’s not leading people astray.