Dreamweaver makes her debut, and it is quite the baptism of fire! – Out NOW at NGCChampionship.com

Elite Force Trainee ‘Dreamweaver’ makes her debut in any format and unluckily for her it is in the ring against a psychotic and furious Commander Curse. Oddly she seems supremely confident however, feeling able to insult the Announcer and generally give the air of an extremely powerful heroine. This will not do…

The Announcer is desperate to see to it that she is totally defeated and in Curse he has a willing combatant. Dreamweaver is absolutely battered by the Commander and her arrogance seriously taken down a peg… But perhaps something else is going on here? 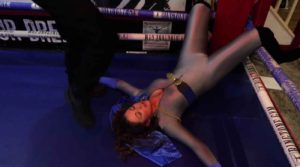 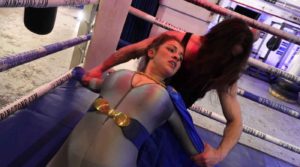 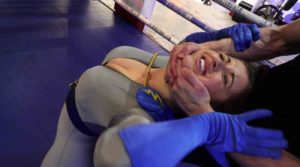 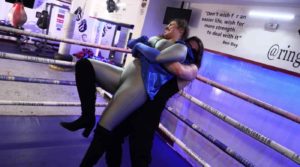 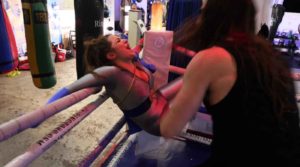 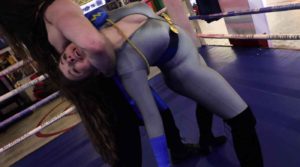 To go alongside ‘Dreamweaver v Curse’ early buyers who purchase within 48 hours of release on Friday will also get unseen video from 2015’s ‘Lady Victory v KO Queen’. If you wait longer than 48 hours this extra video will be cast into eternal darkness. 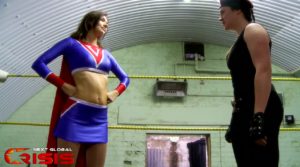 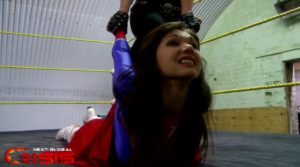 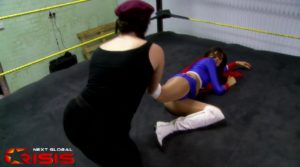 Bought it and love the new actress. Action could have been better and I hated the ending but oh well. Hope to see her against Comet Girl!

I want to add my voice to the bravos for this because it’s more than a bit special. We’re getting a more of a sense of the world outside the ring with every release. Here, the MC calls the ring “…a ring time forgot”. I’ve got an image of the building that contains the ring, spinning all by itself in space (the ring at the end of the universe?). Also when the MC calls for Dreamweaver’s opponent, he calls for “the worst person available” and exclaims “jackpot” when Curse appears. Curse is excellent as always, in fact I think this… Read more »

Whoa. I thought the early reviews must be embellishing a bit on how good this new girl’s performance is, but no… she’s utterly incredible. And I mean, “impossible to believe how good she is” incredible. She looks fabulous, her “traditional” acting is great, and her combat skills are very good for a newcomer, but I think the thing that makes her such a tremendous talent (IMO) is that her peril acting is consistently pitched at a compelling level. What I mean is that when she’s suffering at the hands of Commander Curse, her level of distress rises as she’s worn… Read more »

Cool video. Interesting power for the heroine. The actress playing Dreamweaver is excellent. So, I’m going to skip right to my big complaint. Can somebody please inform NGC where a woman’s hips are!!!!!! That belt would be great if it was worn like any of the actresses who played Catwoman in the 1960’s. But instead her belt is worn as if it’s a brassiere. Seriously, why is she wearing her belt around her lower chest. Put the belt around her hips and make like 20 more videos with her. All in all, great film… despite the weird location of her… Read more »

Um… yeah. I’ve gotta admit, I thought the same thing. As I recall, Dynamite Doll’s belt was real high on her torso the first one or two times she appeared, then it got looser and hung lower on her hips. It looked much better IMO.

I do enjoy seeing belts higher up the waist but I do agree this one seems a bit too much. I don’t recall DD’s belt being that high though, I’m sorry

my current expression after watching: https://imgur.com/a/8DaEuxf

what a performance. Dreamweaver was audibly tired as you can hear her panting throughout the match. she sells everything SO WELL. the writing for the episode was also really interesting. there’s only one ending this time, but that ending was so funny. I can’t wait until fights some of the other heroines so that she’ll influence them with her great acting.

side note: this is something I think I should have mentioned a long time ago, but is there a way to remove that boxing spit thing from the corner? it’s really gross lol.

Wow! Just wow!
IMHO this is the best material NGC put out in ages, and certainly the best one in the Championship series so far. Absolutely stunning actress in nice bodysuit costume, good acting, never feels half-hearted, and good coreography, the punches actually connect, unlike many other movies where they are visibly several inches short. As an added bonus the heroine has an unusual/interesting superpower. Top notch material. Dreamweaver in now my top favourite NGC character/actress hands down. More of this please!

What a babe. Rebook and shoot more content at once!

Just watched this.
Great introduction for the new heroine.
Interesting power she has. I actually had to watch the ending twice because my attention got called away just long enough to leave me confused about what had just happened.

My comment above was inspired by Dreamweaver wearing what is essentially (unless I’m way off) Angel’s original costume. It’s a great costume and she looks great in it, but Angel’s been gone awhile and she retired that look even earlier, so a lot of time has passed for people to forget. Heck, Comet Girl still wears a costume inspired by Suki Deluxe, who she was “impersonating” when she first appeared, and that wasn’t long after Suki was gone. As for Shadowstar specifically, I’d never suggest casting someone new to play the same woman. That actress was irreplaceable. The Fail-Safe Sisters… Read more »

Agree with a lot of what was said here.

Would love to see the Shadowstar costume brought back on a heroine with a different name (a la Dreamweaver), even though nobody can compare to the original, of course 🙂

Even a photo shoot with the Lady Victory or Deceptress actresses trying the suit on could be intriguing….

Everybody knew where that second paragraph was going, right?

Yes that would be intriguing. If I brought the costume back it would be Shadowstar played by another actress in keeping with Failsafe Sister Story, I wouldn’t create a new character and give them that costume.

clutchking
Reply to  Next Global Crisis

Either way, would love to see it back in the rotation! It’s a classic.

This is honestly among the best debut videos I can think of, she really hits the ground running.

Wrecker
Reply to  Next Global Crisis

I wholeheartedly agree. She’s a gorgeous young lady and her acting was amazing! Some of the best reactions (physical and vocal) that I’ve seen in a while. This girl is in a class with Bluebird and Celestia in spite of being fresh out of the gate. I hope that we get to see very many more videos with her. Also, props to Cmdr Curse. He ALWAYS does an amazing job and he’s one of the most intimidating villains out there. Is it just me, or did he seem even more malevolent than usual? Great work all around on this one!… Read more »

Yeah, I think I will buy this one. That outfit is my favorite! Hot model as well. I hope it is packed with beat down action.

Just by the trailer, it looks like the actress is giving it 100%!

That girl in that bodysuit, amazing! Granted I’m a sucker for a full bodysuit like this but this girl really has the body for it. Can’t wait!

Oh man! Isn’t that the same actress that plays Comet Girl? She’s super hot. Buying that for sure!

I meant the one who plays Lucy Zillion.

Looks a little bit like her, but Dreamweaver is a new girl. For sure.
Extremely hot. Can’t wait to see what she brings to the table.

Then I am really hoping for a Dreamweaver vs Comet Girl match! She looks enough alike to be her sister.

She was in a couple of photo shoots recently, but this is her debut in a video as a heroine.
The characters you mentioned are portrayed by different people.

My money’s on Dreamweaver. I believe she can get reach the morning li-iiiiiiiiiite!

I’ll show myself out.

But seriously, I agree that this new actress looks spectacular. I’m also glad to see this costume make a return, and I can think of a few other costumes that have been collecting dust since the actress/character who wore them left the scene (Shadowstar, Dynamite Doll, Powerstar) and could be reintroduced. After cleaning of course. No one should have to wear a dusty costume.

What I’m wondering is how well the characters would be received, if played by other actresses.
So, like Shadowstar. Obviously, the original actress isn’t coming back, but would a different actress be as well received, playing the same character in the same outfit?

It actually fits Fail-Safe Sister story for them to be replaced, that is how that universe works. I don’t know if I’ll do it though, if people just loved the costume then they’ll be happy, but I suspect they were more interested in the actress. I’m sure they’d accept it if I got someone really good, but the original Shadowstar is actually one of the most beautiful people I’ve been in a room with, so on that scale a replacement would be very hard. I tried to get her to come back a couple of years ago but she didn’t… Read more »

I suspect your suspicions about the actresses are correct, which is why I questioned the concept. I’d forgotten about that aspect of the FSS’s universe, though. Thanks for the reminder! …anyway might be something to experiment with. You had/have a stable of incredible actresses, none of whom could ever really be replaced, but I wasn’t looking at the idea from that prospective. More like how once we identify a character as being portrayed by a certain actress, how those two become very solidly intertwined with each other in our minds. I know if I were to run into any of… Read more »

clutchking
Reply to  Next Global Crisis

This is true, I’m likely far more attached to the actress and her portrayal of the character than the costume itself.

For my money, she is the most gorgeous actress to step in front of your camera, and that is saying something! <3 <3 <3

You beat to the Dreamweaver lyric Dr!