In ‘Season Four Episode 4: Nowhere Safe’ Virtue came up against the disgusting Dark Superior muscle ‘Filth’. This foul creature used his radioactive sludge to weaken and defeat Virtue, putting her in a coma which meant she played no part in Elite Force’s eventual victory over the Towers. 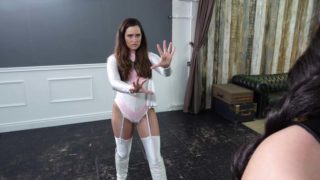 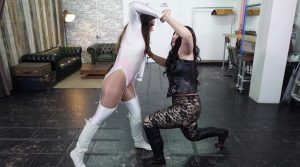 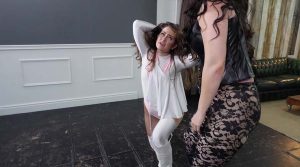 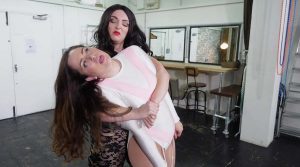 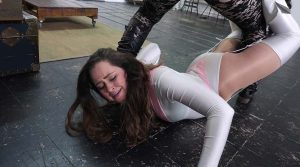 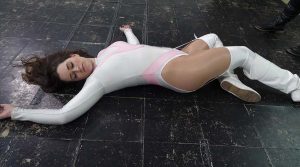 Now largely recovered, Virtue is looking to bring Filth to justice and using various contacts has traced his movements to a particular safe-house. As she lays in wait for her quarry, the Dominator arrives. This maniacal villainess loves nothing more than crushing heroines and Virtue looks like a delicious prize. While not the fight she envisaged having, Virtue will not back down and the two go at it.

Virtue begins strongly, taking the villainess down to the floor, but in some sense it feels like someone knew she was coming as Dominator uses a dart with an enzyme that reignites the latent toxicity still in Virtue’s body from her Filth-y encounter. A weakened Virtue has no chance against the Dominator, and the twisted and sadistic villain revels in putting Virtue in various painful holds as well as knocking her out more than once. With Virtue firmly in her control it seems the Dominator has wicked plans for our virtuous super heroine. What are they?”

This week’s Member Gift, to accompany the release of ‘Corruption – Part 1’ starring Virtue, is unseen Shadow Fox from her first adventure as well as some posed video for members to enjoy. 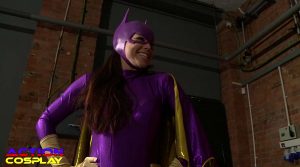 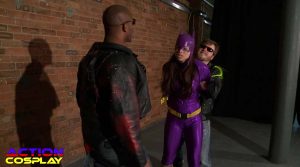 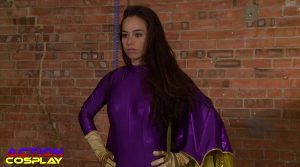 This unseen footage will come with your purchase of ‘Corruption – Part 1’, for the first 48 hours. Then it gets deleted.

What with the superb ‘Bluebird Show’ last week and now this I can only say ‘Monsieur NGC, you’re spoiling us’. The strength of NGC has always been the depth of their characters (they’re not just pretty girls standing around waiting to be molested) and the emotional power of the stories. Was there a dry eye in the house after ‘Public Destruction’ or ‘The Trial’? It’s the same here, a recovered Virtue (perhaps not fully recovered as we soon see) goes after a dark superior who she hopes will lead her to Filth. Virtue wants to bring Filth to justice but… Read more »

When I downloaded the Deceptress v Drone: Part 2 – 54HQ Photo Set, the zip file only had 53 pictures. Image 53 was missing. Am I the only person that has had this problem ?

No, that’s what I received as well. The email said 54 pictures, but the zipped file had only 53. The last image was numbered 54, but there was no image 53. It could be that image 53 didn’t come out well and was deleted, but NGC accidentally credited it as a 54 image set since the last image was called 54 or that image 53 is missing by accident.

Thanks ! Good to know it is not just me !

Allow me to be the first to urge people to get this video. Anyone who has enjoyed the Dominator’s expert dismantling of opponents in the Championship series will love seeing her take Virtue through a tour of punishing wrestling positions. First things first… Dominator and Virtue both look spectacular. I think Dominator looks better here than she ever has before, and her acting (which often gets neglected in favor of her impressive combat skills) remains excellent. Virtue is also looking and acting her best, both when she’s projecting determination and confidence early on and once she’s pleading for mercy later.… Read more »

Glad to see Virtue return after her lengthy recovery, as well as another appearance by the Dominator. Also *very* intrigued by whatever Dominator might have in store for a defeated Virtue. However, this video promises more complications in the ongoing plot as well. Virtue going after Dark Superiors explicitly brings them back into the story. Since it’s titled “part 1” I assume there’s more to the story than a simple fight scene. The Elite Force girls need to think seriously about picking their fights. They’ve already got the resurgent Blackhearts to deal with and, as Comet Girl learned (to her… Read more »

Nice appraisal. Virtue is specifically going after Filth though for personal reasons, rather than Dark Superiors as a whole who are broadly scattered or defeated.

You make a very good point about unity. Whenever Elite Force is united and rallies behind a cause they do well (Seasons 2 and 4), when there is discord they do badly (Seasons 1 and 3).

True, Elite Force tends to prosper when they have each others’ backs (and form alliances) and suffer when they don’t. As for this video, it looks like it’ll be a real treat for those who appreciate good wrestling moves. No surprise to anyone who’s seen Dominator work before. Second, if anyone hasn’t picked up the Season 4 episode this serves as a sequel to (episode 4, “Nowhere Safe”) get it! It’s a great showcase of Virtue and the genuinely menacing Filth, plus a lot of intense action. Virtue is totally… debilitated is the word I’m going with. She suffers not… Read more »

More of the gorgeous Virtue? Great!

Getting this just for the Shadowfox content alone! Hope theres a deleted scene where the two thugs unmask shadowfox in outfoxed 🙂

cant wait for the new shadowfox… but wish NGC had kept that Batgirl cowl tho!

Love the look of this one and definitely love the Shadow Fox photo idea!