On all fours, helpless and looking at the end of a deadly black staff. That’s the last thing Comet Girl can remember as she is met by her team-mates a full year later. What happened in the gap? Here are some answers. 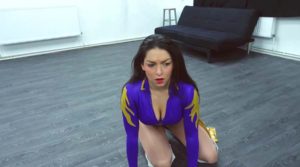 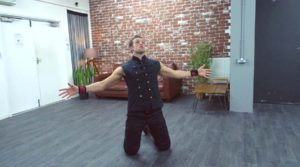 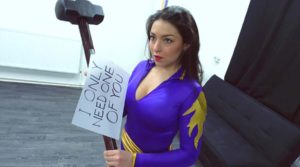 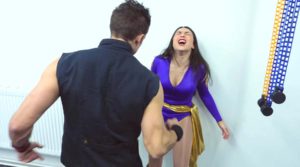 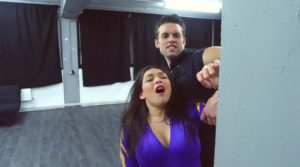 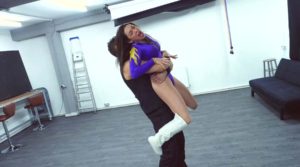 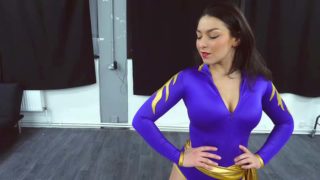 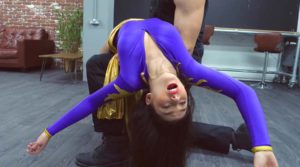 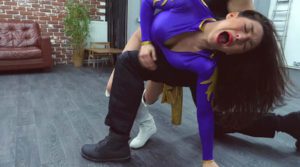 Comet Girl on the point of death is transported to a dimensional purgatory run by some kind of crazed madman. Play his game or end up in oblivion. To make things even spicier she has a playmate; Alaric. He is similarly confused and in the same position. Apparently the person running this game only needs one of them and wants a violent confrontation. Both combatants recognise that their options are very narrow, a fight follows, but who will prevail? 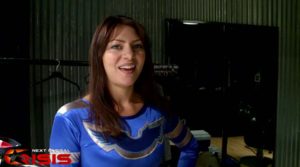 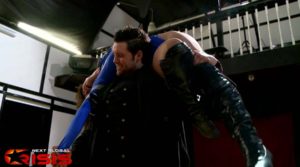 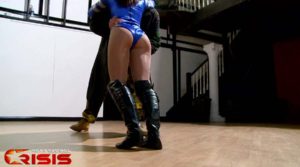 To go alongside ‘Damnesia’ starring Comet Girl any member who purchases within 48 hours of receiving the member email will also get unseen video from 2014’s ‘Hour of Defeat’ starring Bluebird in a charity wrestling match that goes badly, badly wrong against Alaric. If you wait longer than 48 hours this extra video will meet its end at the hand of the dreadful flying glove.

When are you guys going to do another Bluebird video? Seriously its been forever!

You gonna pay to move the actress back from Australia? 🙂

Comet Girl, Virtue and Deceptress. These are my favourite NGC characters.

It seems like ages since Comet Girl last graced my screen, but it was only in July when she faced off against the 3 hoodlums (a release that’s well worth checking out if you haven’t already). The sweet speedster is one of my beloved characters so I was well pleased to see her back in action, especially in a story setting. This release answers one big question (what happened to Alaric and CG after their ‘destruction’) and it poses some others; who is behind all this (I have my suspicions…we’ll see if they’re right) and what do they want with… Read more »

Man, this one was a lot of fun! A welcome and timely reminder of what a top notch talent Comet Girl is. I recently called Dynamite Doll “the most underrated heroine” in NGC, but I think Comet Girl is a strong contender for that title as well. She’s so expressive, everything that happens to her seems 100% real. That comes across quite well in the photoset as well. I particularly enjoyed her take on the debilitating bearhug maneuvers that are typically a Miss Freedom specialty and the “Alaric special” where he breaks the heroine across his shoulders. The power-switching game… Read more »

Three points: 1. The photoset reminds me of the early `00 photostories (in a good way) that were popular then. It has both the heroine posing but also some great action shots that manage to transfer the intensity and power of the moves used, and Comet Girl looks amazing there, she just fills the suit wonderfully. 2. The members gift shows how important background music and post production sound effects are for a proper heroine video. And it also shows how physically demanding for the actresses (and actors too) a shot can be. Not spoiling anything but Alaric thoses Bluebird… Read more »

Only got this because she was in it,not overwhelming happy with it but anything with her in it I will buy.

Went into this thinking the story is going to be great while the peril would be “meh”. Came out with the exact opposite reaction. The story was meh but the peril was great. Or rather, the story didn’t quite expand as much as I hoped it did, leaving more questions than answers and wondering where all this is going. On the other hand? What a fight. What a battle with some truly great perilous moments for our heroine here. Comet Girl does a wonderful job in virtually every department and this for sure is going down as one of my… Read more »

Nice! Love me some Comet Girl!

Comet girl is so hot and that suit hugs her body perfectly. Glad NGC gives us more of her.

oooooh I was wondering this might be and seeing comet girl fight Alaric I was worried it’s not a good thing. It isn’t but it’s nice to see what really happened during this gap of time!

Looking forward to learning a bit about what happened to these two after the invasion as well as just seeing two of NGC’s top performers. Comet Girl looks fabulous in these previews. Looks like this is going to be one of the uncanny episodes, which I always enjoy.

The story alone is all the reason I need to get this. I have long wondered why Comet Girl and Alaric are alive to begin with and it looks like some answers are coming this Friday.