Despite the efforts of the Crown Prince with his sleeper cell of Comet Girl, Sonica was able to return to Sanctuary with a damaged but workable disc on Redstone locations. Spectrum has now been dispatched to bring back the largest chunk of cut Redstone anywhere, but she is in a race against the Masked Man to get it. Had he not been held up by a guard then Spectrum wouldn’t have got there in time. 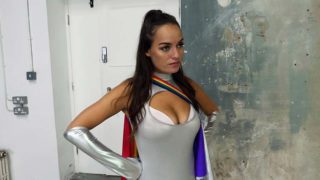 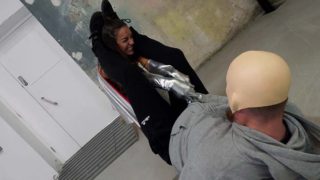 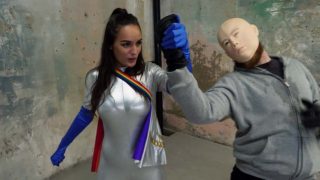 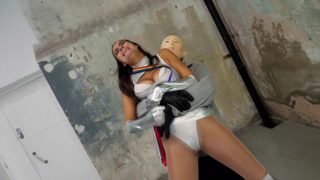 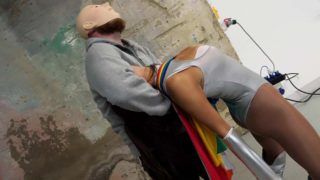 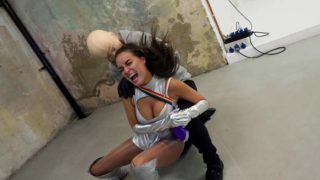 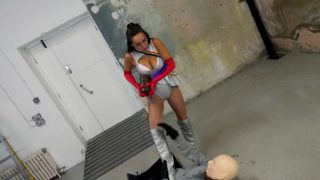 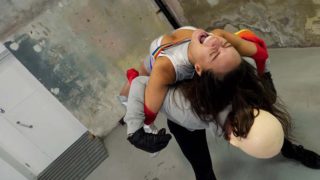 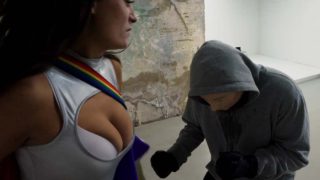 Now Spectrum and Masked Man meet again and duke it out for a stone so powerful it appears to be causing both combatants problems. Spectrum uses most of her powers in an effort to win the stone, but the Masked Man knows her weaknesses inside and out and is keen to exploit them. Who wins the stone? 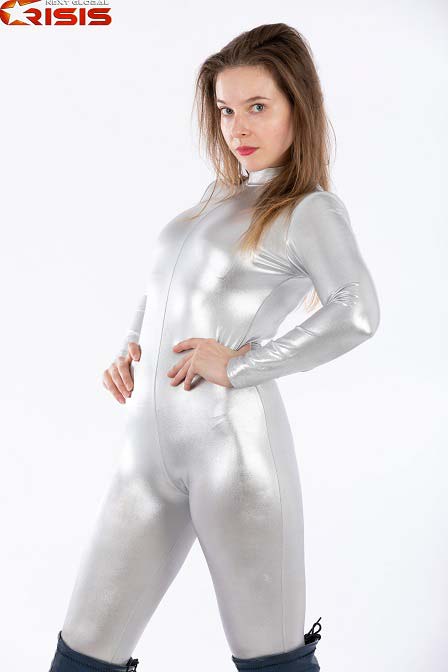 To go alongside ‘Hubris’ starring Spectrum any member who purchases within 48 hours of receiving the member email will also get motion-lapse video from out Silvershot photo shoot. The pause button is your friend when watching this, but we hope you like it. If you wait longer than 48 hours this extra video will be made into a living statue by Blue Meanies.

So I really enjoyed this one. Spectrum is my favorite heroine at NGC, and she didn’t disappoint. I loved her anger and frustration at the end, hoping it leads to her doing something dangerous and reckless (and it seems like its setting up the next group of story episodes, awesome). The photo set was great too, hopefully that matchup will find its way onto the screen next time!

The battle for Redstone heats up… with Spectrum confronting her former master, the Masked Man! Any new entry in the ongoing story demands attention, but after the show these two put on in their first video together, I couldn’t wait to check it out. I’ve only watched it once, but enjoyed it thoroughly. While all the heroines of Sanctuary are recent escapees from the 7th D, I got the impression that the Masked Man (sporting his new skull covering mask and what looks like a winter beard) subjected his captives (including Spectrum and Sonica) to particularly harsh treatment and I… Read more »

Just wondering,is there a over the shoulder carry in this video?

Watched it. Loved it. NGC, Spectrum and the Mask Man were firing on all cylinders when they shot this gem and it’s a great addition to both the story and to Spectrum videos. First and foremost, great opening. Since I was all whiny and critical about the lack of variety in the opening of non-cannon fights, I have to go on record here and praise NGC for doing something completely different. Starting off with the villain beating up a random dude is a gutsy proposition but it works well here given the circumstances. Secondly, this fight is very well scripted.… Read more »

Great review! Not going to lie, the first thing I thought of when I saw the intro was your critique of repetitive intros, ha ha, this one was definitely interesting. I agree that putting aside the peril aspect, this fight was really fun to watch. Spectrum feels like one of those characters that NGC had a really strong grasp of from the start. Like, she feels like a canon heroine almost, like we’ve been watching her for years as opposed to only for a few videos. It’s a major credit to the writing and Spectrum’s performances, which seemingly get stronger… Read more »

That is just great Clutchking that you like it when a heroine braces themselves against the wall when being punched because it’s a potent reminder, for me especially, that this genre is really subjective and people like different things. Here I’m thinking that letting the arms hang loosely is something that can be universally accepted as a good thing and then you state otherwise.

Yeah man, that’s why I like reading the reviews of yourself and some of the other dedicated NGC guys here because sometimes you’ll present a certain point of view and I’ll be like, “Huh… I never looked at it like that, that makes sense.” And even if it’s not for me, I get an understanding of why those choices are made by the producers or actors, and why fans might request them

Lucky for us there’s usually a lot to like for everyone!

I am interested in the member video. Is only she in poses? Or there are fight poses? I have the photoset and it was a fight

It is mainly poses, but there is some action sequence shots!
The only thing I did myself was my own little edit and centered + resized/ position her center of the shots as just a way I would have liked it

Since this is a one ending installment, can someone please PM me if this is a win or lose ending for Spectrum? Would greatly appreciate it!

It’s neither kinda of , but it sets up a wild series of possible continuation videos 🙂

I saw the blog that Celestia will soon be back, which kinda got my hopes up. Then I found out it’s not gonna be in this week… Can I ask when will we be seeing her ?

Sorry, that has been pushed back a bit, but it will come.

GrootMaster
Reply to  Next Global Crisis

That’s fine, as long as we get to see her again. Hopefully it will heavy on fights and nice on-screen knockout, and it won’t be her last performance in NGC. It won’t be… right?

You’ll definitely see her again. She’s got a few adventures coming up that are very tough for her.

This is looking so good. Of course, Spectrum is an actress for whom I’ll literally throw money at just to see her in front of my screen all the time. But I’m really interested in the story developments as well for this one. I have so many questions, particularly as it relates to this whole red stone saga that the plot is currently centered on.

Well, a return match from my favorite NGC episode ever. And a photo-set for my NGC dream match? Count me in!

Heroine Movies will be closing down sometime in 2021. Read about it here.