As if fighting Feline Fury wasn’t difficult enough, this time Shadow Fox has to face her new heroine smasher robot ‘Scourge’. The mechanical beast obeys every command the wicked villainess gives, and these are mostly concerned with beating and humiliating our heroine. 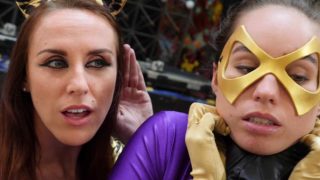 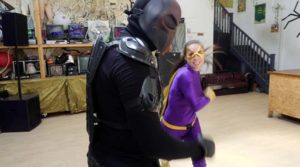 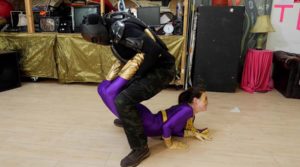 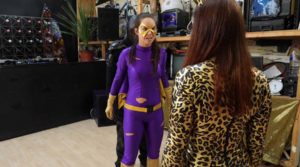 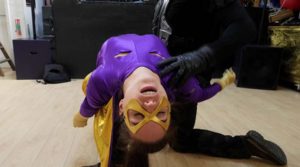 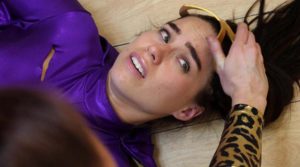 Feline Fury knows exactly which buttons to press to embarrass Shadow Fox and it isn’t long before her cats claws are tearing into the Vixens once pristine purple costume, and removing her mask. Meanwhile Scourge lives up to its name by terrorising Shadow Fox with some brutal moves that could end her heroic career.

Can Shadow Fox find a way to battle back against this vicious double-team? Or will she be broken and her fate left to the local criminal gangs?

If you act quickly and get a copy of Shadow Fox #4: Vixen Vanquished within 48 hours of Friday’s release, you’ll also get unseen takes from ‘Action Cosplay #3’ starring 3 of our greatest actresses, and the only time the women behind Bluebird, Athena, and Celestia were on the screen together. Over 2 and a half minutes of action and interplay between these 3 fan favourites. 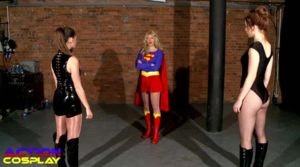 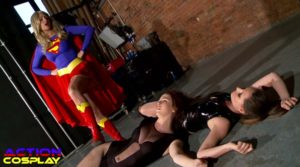 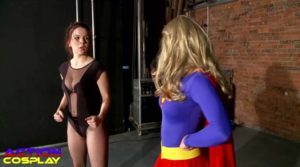 This gift will be removed 48 hours after Friday’s release so make sure to download ‘Vixen Vanquished’ as soon as you can.

This is a very worthy follow up to ‘Catastrophic Encounter’. Shadow Fox and Feline and Fury are every bit as good as they were in C.E; I especially liked Shadow Fox’s outrage at the costume destruction (which was beautifully done by the way) and the back breaker scene was outstanding; Feline Fury’s obvious delight at seeing Shadow Fox being broken was delicious. I liked Scourge too, the robotic sound effects and the mechanical clanking when he (it?) moved were a nice touch. *The members gift is great too. This, and the Bluebird gift from a couple of weeks ago, are… Read more »

D/oh! When I put ‘fight scenes’ I meant that the TAKES are so long!

Also, I forgot to mention Feline Fury’s ‘I don’t know where it’s art’ line. Nice nod to the ’89 Batman movie 🙂

I just realized i didn´t receive an email for this one or for Stolen Victory, weird since i have been subscribed for a long time without any incidents, i guess some outlook update ruined some things. Has this happened to someone else?
Is there a photoset included with this release? i would love to have that too!

Best thing to do is email me directly and I can investigate. Nextglobalcrisis@gmail.com

I loved the little homage to Batman and Bane there, pretty cool video as always, loved the potential open ending … or, is it?

Thanks very much. We will have to see.

Thanks I am glad you liked it. I don’t think Angel is acting for anyone anymore I’m afraid.

Bought and watched. Is this an open ending? Or this simply means that she falls in the hand of local gangs without her mask and her heroine career is ended, Is the story line closed?

Action Cosplay isn’t generally on going like NGC story, but we may continue it if the chance arises.

TheVoice
Reply to  Next Global Crisis

Definitely love the idea of her going up against common yobs. maybe one of them just got out after she put him away? a sequeal means the costume can be re-used too 🙂

Orcaman001
Reply to  Next Global Crisis

Was on the fence with this one. Maybe even leaning towards a pass. Then I saw the trailer. Definitely getting this one when it comes out.

Feline Fury alone is enough to sell this to me, but check out the members’ gift! That episode was *the* highlight of the first Action Cosplay series. The only video with all three of these NGC legends, and the only one with Athena and Celestia in those outfits.

Oh no not costume destruction!! I honestly hate when that happens as I really love the costumes personally, the color, style and how they fit are just fantastic. But as the story demands I understand that there will be some losses ;_;7 can’t wait to see what happens for her next costume! If it will be an updated version or completely new! And secondly aside from the awesome Shadowfox video I hope everyone loves the member gift, that was a great video too and I can’t believe that was the only time they all appeared on screen together! :O

I more of a “meh” when it comes to costume destruction. Doesn’t particularly add anything for me but neither does it subtract. Although, one arm sleeveless Wonderstrike was pretty hot in Game of Two Halves so maybe it needs to be the right kind of costume destruction for me to enjoy it.

Costume destruction is quite minimal….

can’t wait for the release!

Any chance we will see a scenario where shadowfox gets overwhelmed, defeated, and unmasked by a couple common street thugs? The main selling point from the first shadowfox was that she was just a normal vulnerable heroine so would love her defeat against regular thugs as opposed to superpowers villans 🙂

Well we haven’t done it yet but maybe we will some day. The first Shadow Fox was a bit like that if you got it.

dbud
Reply to  Next Global Crisis

I like this idea. I’ve always liked the scenario where the heroine is taken down by relatively normal guys. Either she is weakened from a prior fight or just over-matched by normal guys. Like a three on one beat down.

Batgirlfan
Reply to  Next Global Crisis

Yes I have all the shadowfox episodes as well as almost all NGC. Out of all seasons and episodes, Shadowfox 1 is my favorite. Would have liked it better if no “big” boss showed up and those common street thugs were the ones who did the defeating/unmasking/tying to the chair

To expand a little more, I like the idea of the heroine defeated by the main bad guy, that’s where the ep picks up, so right off the bat we see the tail end of the defeat. then he leaves her to lick her wounds. as she is recovering and about the leave to regroup, the normal guys show up and continue the defeat.