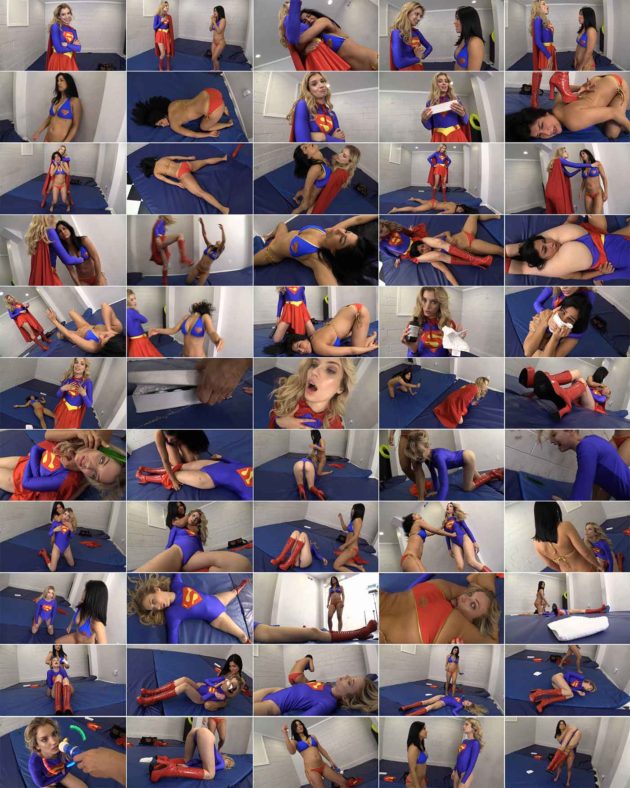 Supergirl Kat opens this fantasy video with a live stream update for all her fans, congratulating herself for all her most recent heroic deeds. Claiming she can’t be defeated, she then reveals a surprise, a fan that won a contest for writing an essay, Saya.

Wearing a Supergirl themed bikini, Saya enters the room, gushing over her favorite superheroine. Thinking she would get to spend the day helping her to fight crime, Saya is only slightly disappointed to find out she’s actually here to help Supergirl practice. Still gushing she hops in anticipation before Supergirl unloads a blast of super-breath, slamming the lithe brunette back into the wall, stunning her. Saya collapses to the ground, her butt high in the air. Figuring the she’s just too powerful to get a real practice from a mere human, Supergirl pulls a box out that contains Kryptonite, only open enough to slightly diminish her powers. Stomping on Saya’s back to wake her, the brunette whines confusedly about being treated like this. Supergirl reassures her enough to help her to her feet, only to pull the poor superfan into a tight sleeper hold, swinging her around until her rolling eyes close and she drops to the floor.

She picks her up once again, pulling the hapless brunette into a crushing bearhugs that squeezes the air from her lungs until she once again passes out. Supergirl pulls her up to her feet and shoves her against the wall, setting up destruction from belly punches that rock her on her feet, knee lifts that lift her from the ground, and finally a heart jab that knocks the tottering Saya to the ground. Supergirl props her up on her knees, patting her face to wake her before unloading a devastating kick to her head, knocking Saya flat on her back, out cold. Supergirl continues the punishment with neck scissors, inverted neck scissors, clubbing her in the face and head, and finally chloroforming her into unconsciousness.

As Supergirl talks about how she’s still too powerful to the fns at home, Saya comes to, and then makes a grab for the box containing the deadly Kryptonite, opening it. Immediately the radiation drops Supergirl to the ground as she writhes in pain, while Saya brandishes the crystal at her. Now weakened, Supergirl is in for payback as Saya strokes her with the painful crystal until her wide eyes flutter shut. Saya strips her of her cape and skirt, then leads her in a hair pulling crawl around the room before slapping her into her own tight sleeper hold. Supergirl can only gag and wail until her eyes flutter shut, but it’s not over yet.

Belly punching, knee lifts, face punching rock the maiden of might, setting her up for inverted neck scissors, then chloroform slapped over her mouth, making her wide blue eyes roll back before she passes out. Saya kicks her awake, then grabs a hypnosis device from Supergirl’s bag of tricks, putting her into a highly suggestive state. Saya commands her to fall asleep on her feet, catching the blonde titan and lifting her over her shoulder, carrying her around the room before carrying her away as a real live trophy. 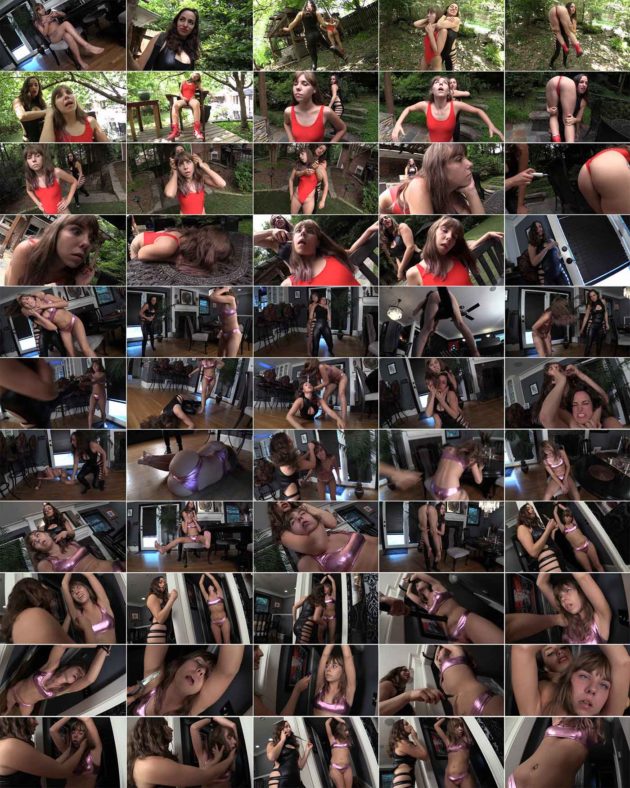 We open on Monroe, decked out in a tight silver bikini set, checking her cel phone, making sure her payment for a caper assignment has gone through. Outside, Karly stalks around the house, informing us that she’s on assignment as a Secret Agent/Assassin, going up for her big assignment, taking out Monroe, and her clone security and retrieving the agent list Monroe had stolen.

Wearing a black catsuit, she stealthily makes her way through the yard. There she encounters her first clone, sneaking up behind her and wrapping her into a tight sleeper hold that makes its eyes roll, before snapping its neck, catching it as it falls and carrying it away over her shoulder.

Her next target is sitting in a deck chair, as Karly slips up silently behind, stabbing it in the neck, making it twitch and shudder as its eyes roll back into its head, finally slumping over with slackened mouth, neutralized.
Karly makes quick work of the remaining clones, surprising them with clubs to the head, chopstick temple attacks, neck snapping, injections to the butt, and taser attacks to the skull before finally entering the house.

Quietly she picks sneaks up behind Monroe and yanks her into a deadly sleeper hold, demanding to know where the list is. A series of sharp elbows to the belly gets Monroe released as the two girls suddenly go at it, throwing punches, getting yanked into arm bars, escaping with back-kicks to the groin, until Monroe grabs Karly’s foot from a spinning kick, tripping her to the floor, then rushing in to slam her head against hardwood over and over, stunning the secret agent. Yanked back into a sleeper hold, Karly struggles and gasps before raking Monroe’s face to get released, then kicking her belly over and over as Monroe can only curl and gasp into the blows.

Punches to the face keep her rocked on her feet, then knee lifts explode the air from her lungs before a head slam into the nearby table knocks her loopy, slouching into a nearby chair. Karly wastes no time sliding up behind her, pulling her into a sleeper hold that makes the red-faced blonde sputter before her eyes roll back, knocked out. Vowing to have fun, Karly carries her off over her shoulder.

We find Monroe tied up in a doorway as Karly mocks her, claiming she’ll be having fun with her all day. She then sets to punishing her with an injection that magnifies sensation, then assaulting her with belly punches, clubbing her in the belly and face, tasering her over and over, stabbing her in the belly, while Monroe can only dangle helplessly absorbing the brutality. Karly interrogates her until Monroe can take no more and gives up the location of the agent file. Karly then sends her off to dreamland with a crushing sleeper hold that makes her gasp and drool, until at last her crossed and rolling eyes flutter shut. A final neck snap ends her suffering.