“Superheroines vs Aliens” from Cali Logan

Ultragirl and Inferno wake up on an Alien space ship with no recollection of how or when they arrived. There is a force field surrounding them and Ultragirl tries to use her super strength to punch through it. The voltage fights back and electrocutes her out. Inferno tries the same, and suffers the same fate. 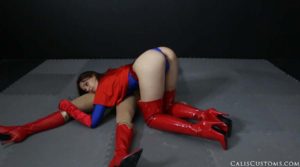 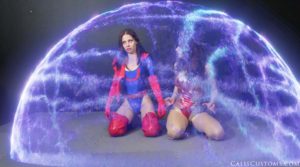 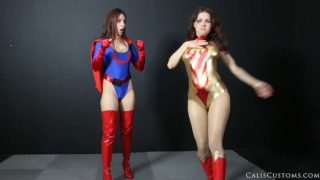 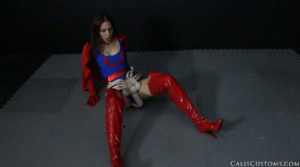 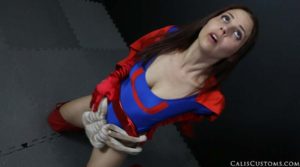 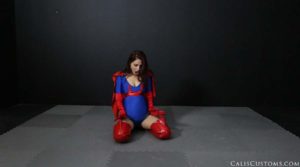 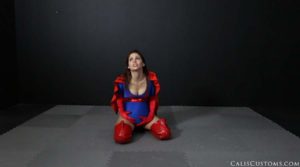 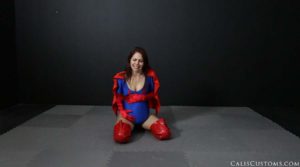 The girls wake again to find that the force field is gone. As they try to flee the area, fire balls come hurling at them, once again sending them back to dream land. Its all just part of the alien’s master plan and it is working perfectly.

This time when the girls awake, they are fitted with metal devices and stuck in some sort of a fog. They can do nothing but moan and shake as their minds are slowly transferred to the enemy and implanted with alien telepathy receivers.

Again, they awaken in the empty room. The aliens talk through their brains and explain that they must fight each other to the end. Only one will survive. Ultragirl tries to bargain with the aliens, promising to protect and train them. Its no use. Thats not what they need. They already took their brains after all. Inferno tries to use her powers on Ultragirl, but they dont work in the alien environment. This infuriates Ultragirl and she attacks. The heroines wrestle for domination until finally Ultragirl is able to apply a tight sleeper from behind and win the battle.

She demands that the aliens hold up their end of the bargain and let her go. They, instead, deliver an invisible ray that knocks her out once again.

Ultragirl wakes to find that Inferno has vanished! To make matters worse, there is an alien attached to her crotch. She screams and tries to remove it, writing and pulling….but its too late. The seed is being planted.

Ultragirl wakes up one last time, her belly full with an Alien Invader. She doesnt have time to think of a plan. A big plum of smoke fills the room and carriers her away. No one will ever know what happened to the the heroines after this.