Bluebird returns to Next Global Crisis in a new video called Three Lives. Check out more information below. 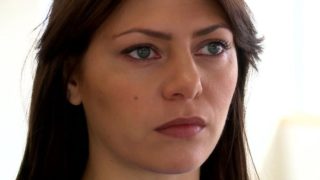 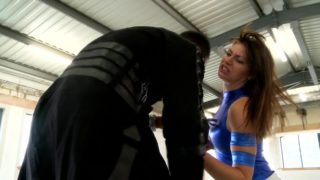 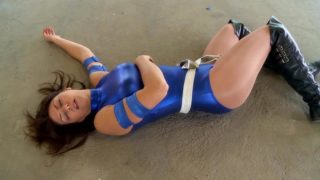 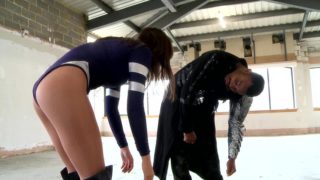 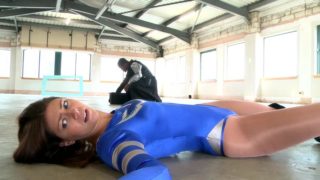 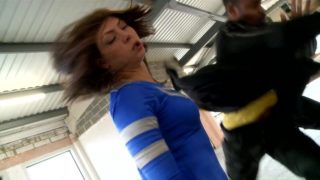 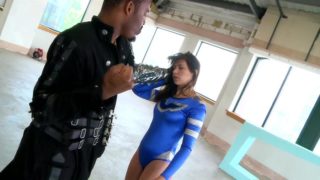 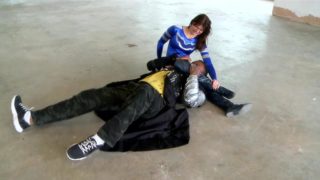 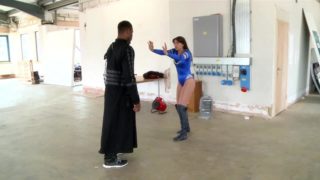 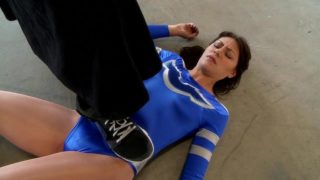 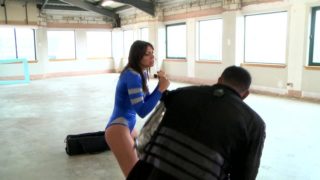 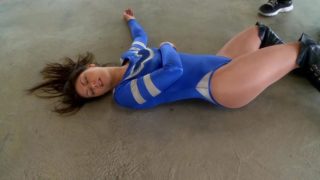 Bluebird has been captured by her arch-enemy Rex Deacon and put under his control by nefarious technology. Rex despises Bluebird and is hellbent on defeating her in all 3 of her iconic costumes. Bluebird is disgusted at the thought of him dressing her and vows to end his sick plan.

Bluebird fights hard landing multiple good shots to Rex, but they are totally ineffective and his electric arm soon sends her into a dizzying trance. Rex works through Bluebird’s first two costumes in this way with 2 powerful KO’s. Finally, in her third costume he gives her a glimmer of hope, by shutting down the machine that is weakening her, so that he can ‘feel’ something. What follows is a brutal fight in which Bluebird gives her all, but will it be enough? Should Bluebird be defeated, she will be Rex’s play-thing forever.

Mmm…might bite the bullet and get this one, if only for the old old (and best) costume. One question which is maybe a bit left-of-field: I’ve noticed that Bluebird’s actress Claire doesn’t seem to perform her full range of stage combat skills when protraying the character anymore, while she does when acting roles for KickAss Kandy / BadAss Kandy; If anything, Bluebird seems to have gone more the bruiser/brute force style, which is a bit strange compared to how the character began – cartwheeling on the scene and displaying a speed/agility based style…I wonder why the change of pace in… Read more »

If you’re buying for the oldest costume, you may be disappointed because its only in it for like literally one minute. Comes and goes really quickly.

Next Global Crisis
Reply to  PhantasmaRosso

Well she’s a bit more acrobatic here, we have a cartwheel and a flying kick, stuff like that. Perhaps going toe to toe with someone like Rex isn’t very smart…

Just a quick question here. I’ve bought many NGC videos before, but I’m a huge bellypunching fan, so are their plenty of bellypunching action scenes to bluebird, both in regular speed and slow motion, and any closeup action scenes??

Next Global Crisis
Reply to  Absstar

Yes there are a few of these with big reactions.

Here is my personal review (Possible Spoilers): I was pretty disappointed in this one. Granted, I got it at the discounted members price, so it wasn’t too bad on my wallet. However, I wouldn’t recommend paying full price for this unless all you care about is seeing Bluebird again. This is another quick film by NGC and they deliver on the promise of KO’ing Bluebird in her 3 costumes, but the first two happen in a flash, so don’t blink. In her last costume, the fight is a little better, but most of it is done in slow motion (“Crisis… Read more »

I am unable to resist the Bluebird episodes of NGC, because the actress is the best, hands down, in the Superheroine peril business. This episode, though, was a bit underwhelming. I’m not sure if this was a custom, but all three KO’s were identical. Three right crosses? That’s it? Typically NGC is at their most creative and, for lack of a better term, brutal, in the Bluebird episodes, but this was repetitive and, to be honest, boring. Enough with the face punches.

This latest installment of the exploits of Bluebird does not disappoint. The actress is, I think, the best in the business, selling the dialogue, the fight sequences, and the peril like no other. What more can I say: Bluebird takes my breath away! Another winner, NGC!! Well done!!

REALLY intrigued by the new Infinity Girl. Will you share what her powers are?

Next Global Crisis
Reply to  Rover

Oh that’s a big surprise. Looking forward to showing that though.

… I can’t believe I’m actually hesitating from pulling the trigger on buying a Bluebird video (particularly one that features her in her original and unparalleled costume), but between the runtime and one sequence in the trailer, there’s a question I feel I need to have answered before I buy, because I’ve seen enough at this point to know with 99.972864% certainty that the answer will have a “Make or Break” impact on my enjoyment of the film: does the video feature a “Crisis Moment” montage? Not looking to start any fights or discussions on the merits of the technique.… Read more »

It does indeed include a ‘Crisis Moment’ in – in fact, quite a significant one!

Apologies, just curious – what is a ‘crisis moment?’

A “Crisis Moment” is a slow motion montage, usually set to the same musical accompaniment, of the heroine or heroines taking abuse. One example off the top of my head, if you’ve seen the NGC Season 3 finale, is the latter stages of the fight between Alaric and Miss Freedom/Celestia.

Wow! Really missed Bluebird, great to have her back!

I hope this one has a win/lose double ending?

Next Global Crisis
Reply to  Warfish

I just can’t get enough of Bluebird. The camera clearly loves her face.

Next Global Crisis
Reply to  Shazrand

Indeed, she’s beautiful. We’re lucky to have her.

I’m of the oppinion that Bluebirds original tight & shiny costume was by far the best of the 3.
Discuss…….

Next Global Crisis
Reply to  Robbie

Well you get all 3 in this one so no need to choose!

Rover
Reply to  Next Global Crisis

Well the darker of the three is definitely the weakest one, for me, but the newest one is more ‘regal’ in some way, and just has more of a ‘heroine’ feel to it than the first one.

But it doesn’t matter so much, of course, as who is wearing it. 🙂

While we’re all entitled to our opinions, I have to disagree here. For me, the dark outfit is quintessential Bluebird. I always thought she was best in that outfit.

God, I love Bluebird!! Looking gorgeous, as always. I am really looking forward to this latest adventure of an awesome Superheroine!

PS this inspired me to go back and watch Season 3, SM 12. Bluebird was great in that; looking forward to another one similar!

Return of the queen!

All I can say is that Friday can’t come soon enough!!!