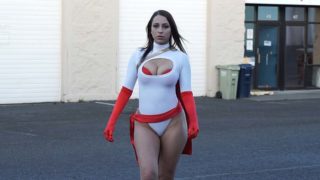 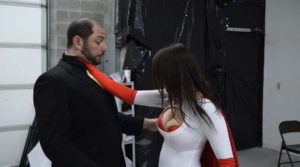 Superia’s overconfidence leads her into a 1 on 1 confrontation with an unarmed Lex. He tries to convince her that a powerful villain has figured out a way to defeat her and only he can stop him. Superia, never experiencing an equal, doesn’t believe him and uses the moment to teach Lex a lesson. Her attacks slowly seem to lose steam but Lex keeps his cover story until Superia fails to break a sledge hammer… Lex Reveals that he is the villain that has learned how to defeat her and to Superia’s surprise Lex beats her up from one side of the warehouse to the other giving the young heroine a taste of her own medicine. Once completely helpless Lex whips out his massive cock and treats Superia’s mouth like his own personal fuck toy while she can only gasp for air.

Does anyone know if the Rye UK will be releasing a film soon ? Their movies are great !

I’m still holding out hope for an Eye of the Beholder 2.

You are not the only one. Eye of the beholder was amazing. I hope we will see the sequel one day.

Agreed. Rye UK was a great studio. The last two Villains United, Avenger 2 and the two Frame of Minds were some of my favorite videos back in the day. Particularly Villains United. Spectacular video that was.

How is her ream name??

I think he meant what’s her real name. Or at least another name she uses.

I used to buy every Rye film. Now I’ve pretty much had it with fully clad females and endless loving closeups of naked male genitalia. Not what I want to watch at all.

Fun vid. BJ is about 7 min. of the 20 min. run time. All in all very well done. Same higher frame rate as before (I think). Coco looks stunning. Sad to see her leave. No nudity, but have I mentioned the long BJ scene? And it is great. BUT: man, I don’t mind the voice over (which I hate… but ok, custom), but that MUSIC. You simply cannot find a piece of music so wrong for this kind of movie. And to those who have not purchased (yet) who do have an opinion nevertheless (this being the internet and… Read more »

An interesting point about the music. I was watching some of Rye’s older Supergirl videos and I appreciated how he used a variation of the music from the Helen Slater “Supergirl” movie.
It might not be a bad idea to have a discussion on the topic of the background music. I don’t think that subject matter has been broached yet and the music does affect the tone of the sequence.

Agreed. I don’t know what he was going for here, though. I was also very much reminded of Bernard Herrmann… Cape Fear… could have well imagend Bob DeNiro covered in tats doing push-ups. It actually worked a bit better in the fight scenes in this vid.

Now you’ve got me curious.

It’s a rip-off of John Williams’ style. He’s used it in several of his films lately. Probably trying to recall the feel of the Superman movie without running into copyright trouble.

The one in Hands of Man II? Yeah, to me that’s Williams not Herrmann, but (1) I don’t remember anything from Cape Fear except Max’s theme and a lot of simmering tension, and (2) I recall from Hands of Man II that the music plays both the ups and the downs, and the latter could very well be Herrmannesque. Now in Hands of Man II it was not subtle, and I could see it being too bombastic except I thought it was very well matched to the flow of the conflict.

Yeah. Heard a little bit of that as well in there. But not a good fit. Did not work for Bryan Singer either.

As I wroe: you can speculate or watch this movie and experience it for yourself. You could also go on YT and search Cape Fear opening credits. To my ears this – the reworking of Herrmann‘s original score for the remake comes closer. Williams music is much lighter on its feet so to speak. This here is Herrmann bombast at is finest. Kinda works in the fight scenes here, but you know what: I don‘t need a full bombastic score blasting for 7 minutes while she is forced to give head. But maybe that is just me.

I heard she was retiring, too.
I guess this is her last video?

Nope. Check upcoming releases on the TBFE website. There are a few more. And that is just from one producers. And she “retired” before. Hopefully she has a change of heart once again.

My thinking, exactly.
Thanks for the heads up.

No pantyhose, no debooting… pass it again

Yeah… Curiously, the most successful studios have it …

Purchasers: Does the BJ scene live up to the hype?

What’s “epic” about it? Duration? How rough it is? Facial?

How is it different than the ones we’ve seen before?

I’d say it’s a bit rougher than her usual. She’s on her back for the whole thing, too, and I think that’s different. I dunno.. she also seems a different kind of helpless by the time the BJ starts.

i read Coco and then instant purchase