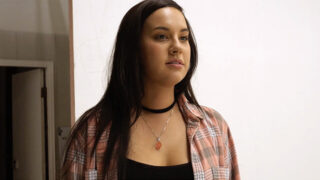 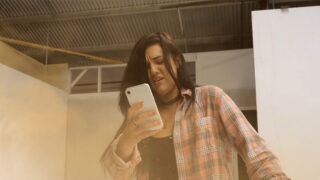 When Agent Wonder (in plain clothes) arrives at the villains’ lair in search of information about a violent terrorist group, she is caught off-guard by a booby trap, receiving a dose of weakening gas, which renders her dizzy and almost unconscious. A masked henchman appears and finishes the job, knocking her out with two quick blows before injecting her with a weakening agent to make sure she is no longer a threat. He frisks and searches her, and we suspect that there’s more to these searches than mere business as he seems to enjoy it.Occasionally, our heroine awakens and attempts to fight her way free, but she is continually knocked unconscious, becoming a helpless victim to the villain. When his boss arrives, things get even worse for our heroine, who is constantly knocked out and toyed with, despite her best efforts to put up a fight. Part 1 ends with our heroine unconscious and defeated.Later, Agent Wonder returns, powered up and in full superheroine costume, to get revenge against the villain and to find the information she came for in the first place. She fights him and easily delivers a beatdown, tossing him around like a ragdoll. He finally surrenders and promises to give Agent Wonder the information she is looking for. Unfortunately, the villain is not as dumb as he looks — he has set a trap for our heroine and soon finds himself double-crossing her.She is severely weakened by the trap, which allows the villain to eliminate the source of Agent Wonder’s powers. From this point on, Agent Wonder receives an extended, violent beatdown and is repeatedly knocked unconscious. The fiend toys with her unconscious body, ragdolling and frisking her, and delivering more knockouts every time she awakens.Eventually, Agent Wonder is tied AOH and tortured with painful phaser blasts, a taser, and a chloro rag, which is applied to her face almost to the point of unconsciousness, only for the villain to remove the rag and torment her some more.Contains: Weakening gas, multiple KOs, belly punches, face punches, stomach kicks, injection with weakening agent, frisking, clothing removal (PG-rated), dragging (brief), over-the-shoulder carry, phaser blasts, chokeout KO, AOH bondage, taser torture, chloro rag torture, chloro KO, debooting, and more!Running time: 42 minutes