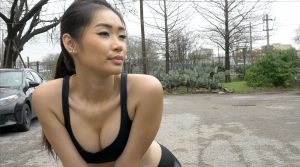 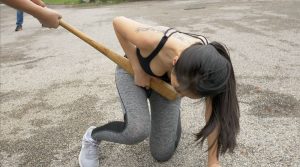 After completing a successful assignment, Asami enjoys some well-earned time off and goes for a run. Unbeknownst to her, two thugs watch her, ready to strike when she least expects it. They make their move, grabbing Asami and delivering multiple belly blows with fists and a baseball bat. Asami suffers and realizes that these are no ordinary villains.

A flashback reveals that the same two thugs delivered a similar belly-centric beatdown several years earlier, when Asami was but an innocent schoolgirl. These time-traveling thugs appear at different moments in Asami’s life, trying to beat her into submission and convince her not to use the superpowers she’ll develop in her life. The thugs want to deliver a beatdown Asami won’t soon forget.

Note: This is a custom video centered on blows to the belly (with punches, kicks and a bat.)