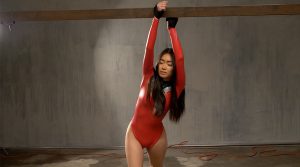 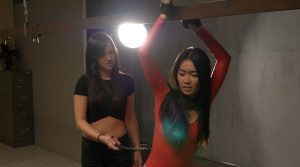 Asami returns to face three powerful enemies: Mortus, the supervillain who defeated her in Asami 2, a female villain, and a male henchmen. Asami finds herself captured and bound, subjected to various tortures at the hands of the female villainess and her male counterpart. Asami is whipped, beaten and electrocuted.

When Asami manages to break free and dish out some punishment of her own, her old enemy Mortus enters, disabling Asami with electric bolts. Asami puts forth a valiant effort and manages to make it an even fight, but she is worn down by the combined efforts of the three villains, who deliver a savage beatdown to our heroine.

To make things worse, Asami is continually regenerated — brought back to consciousness with adrenaline injections after being beaten unconscious and knocked out, prolonging the beatdown to the delight of her enemies. Finally, after being forced to admit defeat, Asami has a collar placed around her neck and is dragged around in humiliating fashion by her female nemesis.