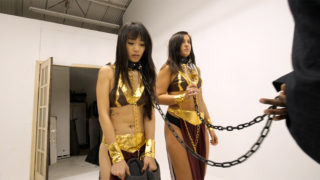 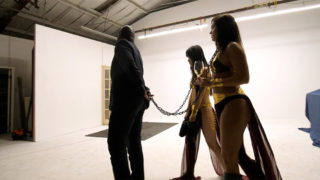 Omega Girl and Asami have been captured by a ruthless, sadistic fiend known only as “The Billionaire,” who keeps the heroines chained in slave attire — his personal playthings to be used for his entertainment. He often pits the two heroines against one another in battle, punishing the loser by hog-tying them on the Altar of Shame, where they are tortured with electricity.

The Billionaire decides that while the loser of today’s battle will receive the usual Altar of Shame punishment, the winner will be released. The two heroines have little choice but to fight each other at full strength, hoping that a victory will mean a chance at freedom.

Omega Girl and Asami battle each other as The Billionaire uses a mysterious device to manipulate the course of the battle for his own demented amusement, placing various weapons throughout the arena at various times — a bat, a stun crystal, a phaser, a sledgehammer, a whip, a gas bottle.

Only read this is you want to know the ending before purchasing! The battle ends with a decisive victory; Omega Girl manages to defeat Asami with a sledgehammer to the head (blow delivered off-screen). Asami is transformed back into her slave attire and placed on the Altar of Punishment, where she receives a bout of electroshock-torture. Omega Girl is released from the possession of The Billionaire… but is double-crossed, and given to another master, who promises to deliver her to his associates, who are waiting for their chance at revenge.