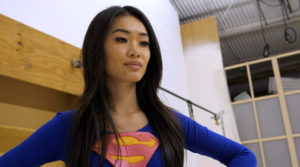 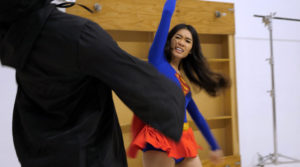 (Spoilers ahead) Supra Girl arrives at the hideout of the dreaded villain Mortus in order to take him down and end his threat to dominate the earth. She fares well against him in hand-to-hand combat, until Mortus reveals his true power with a devastating hit to the heroine’s head with a crowbar.

Stunned by the revelation of his power, Supra Girl finds herself utterly destroyed and dominated by the mega-powered villain, subject to a beatdown, electro torture, bondage (brief sequence), broken bones, multiple hits, and overall devastation (including small amounts of blood). Supra Girl meets her ultimate end via electrocution. This video is not for the faint of heart! (Bad End)