UltraHeroix has released not one, but two new Lady Ultra videos. Read the company’s announcement below about this rather unconventional release strategy, and check out more information about both videos. 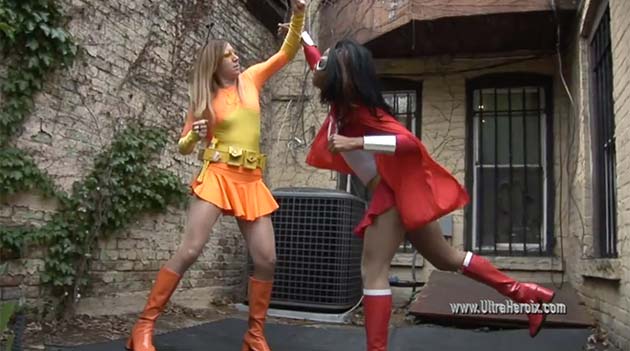 There’s a couple of reasons why we decided to release 2 videos together. The main reason is that I’m expecting the birth of my second child in February so I’m going to be pretty pre-occupied with this new family addition for the next few months so the 2 videos is to hold over fans for a bit. The second is we never did it before and I’m curious to see how it’ll do, the first was meant to be released awhile ago but we had problems with the file and we were lucky to recover it. So, since it was shorter than normal, I wanted to have a longer one with it. Besides, February is black history month so why not have 2 videos featuring our black super heroine, Lady Ultra.

Lady Ultra has been defeated and captured by Death Punch, now she must find a way to break free and defeat the villainess before it’s too late.

Lady Ultra: Revenge of the Doctor

After defeating Death Punch, Dr. Mindkill gets the drop on the weary heroine and easily defeats her. It’s up to Lady Ultra’s allies, Dynafly and Crimson Cat to rescue the heroine or end up as casualties in the Doctor’s revenge.”

Purchase both videos at UltraHeroix

Thanks Raiderman!
Dynafly and Agent Wonder together would make an interesting combo and story. The story idea is something to really think about.
Thanks again!

Congrats on the new addition to your family. I purchased Revenge of the Doctor mainly for the actress playing Dynafly. I’ve been waiting awhile since I first seen her in Die or Fly which I think is the only episode this actress played Dynafly. Not disappointed as the video hit the mark as far as my taste goes. It would be great to see Agent Wonder and Dynafly in a film together where they are put in a trance by an evil villainous and made to fight each other to a KO finish. Just on my wishlist. Again congrats and… Read more »

@ Ultimate Superheroines
Thanks! Welcome to the SHIP genre and good luck!

This looks great! Dr. Mindkill is a great bad guy. No pun intended but he is killing it! And a MAJOR congrats on the new baby!!! Good thinking getting 2 episodes out there before the big day. It’s going to be a great adventure!

Thanks Mike3, I appreciate it! We’re looking forward to the new addition, in the meantime I hope the fans enjoy these new Lady Ultra video!
Also, Thanks Christopher! I’m glad you enjoy seeing an African American Superheroine, you’ll see more of her this year!

Might have to get these, honestly, it is nice to see an African American superheroine once in a while.

Will definitely buy these. Loved the first Lady Ultra actress and love this one just as much! More importantly, congrats UH on the birth of your second child!