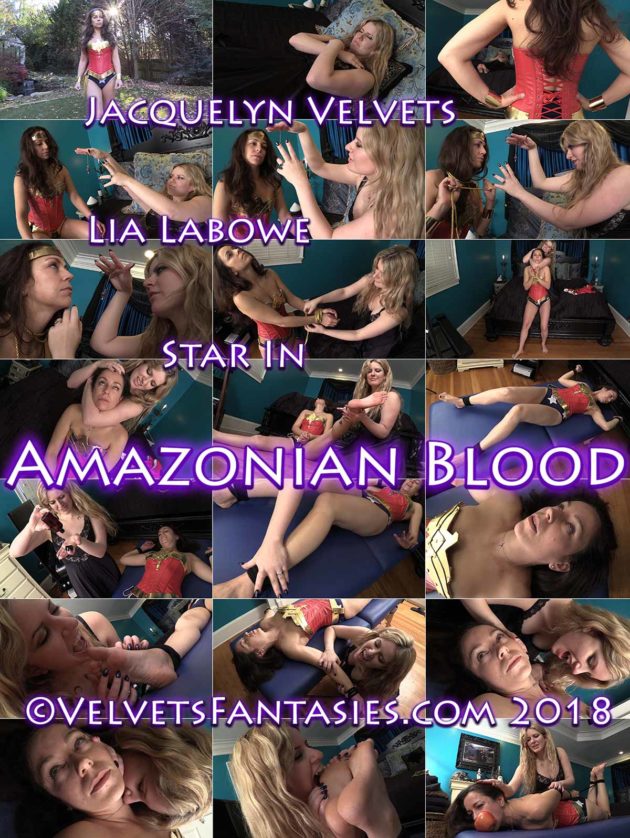 We fade in on the beautiful Wonder-Woman making her way through the exterior of an evil vampire’s lair. We learn via voice-over that she easily made her way through the villainess’ (played by Jacquelyn Velvets) minions as she kicks her way into the building. She finds the demon slumbering in her bedroom and moves in to take her down, but she’s taken aback by the evildoer’s beauty. It distracts her long enough for the vampire to awaken and quickly hypnotize the superheroine with a magic pendant. Velvets smiles, baring fangs as she makes Wonder-Woman give up the sources of her power (her bracelets, tiara, and boots), only to trap her in a powerful sleeper hold that renders WW unconscious.

Our protagonist awakens moments later, tied to a table as the vampiress makes her way to her. She covers her body in a special oil designed to paralyze her as it enhances her pain receptors. Little by little, the vampire sucks blood (biting is shown, but not actual blood) from Wonder-Woman’s body. She suckles on her feet, legs, wrists, and finally her neck…draining her to the point of unconsciousness. WW moans, her eyes rolling…until the darkness finally washes over her.

The final scene: Wonder-Woman awakening in a hog-tied position, her eyes filled with fear as the vampiress prepares her for a final meal. She shoves an apple into the heroine’s mouth and takes another bite out of her exposed feet before leaving her there, squirming and weak…unable to break free as the camera (and her future as a crime-fighter?) fades to black.

This was a great one by Jacquelyn. Lia looked and acted amazing as Wonder Woman, with one of my fav scenes being where she hands over her power items. She put a nice sense of growing a little weaker with each removal. She also did a wonderful job portraying being under Jacquelyn’s hypnotic sway. Jacquelyn though shows why she’s awesome as playing a villainess, especially a sexy Vampire. Her dialogue is awesome and she just has a sexy presence even while wearing a full length nightgown. If your a vampire fan definitely get this one.