“Amazons Trapped in the Dungeon of Doom” from Max Frost Productions

Dispatched by the J.L.A. to locate and secure the L.O.D.’s diabolical new weapon, the Nervo-Transferometer ( a device that can take control of people’s bodies when tuned in to their brain waves), Wonder Womyn (played by the gorgeous Hollywood) and Wonder Gurl (played by the sizzling Stacy Burke) return to the villain’s lair and encounter the L.O.D. boss (Scott). Before they can apprehend him, he turns the Nervo- Transferometer on the over-confident heroines, forcing them to walk across the room toward and electrified floor grid (and their doom). Will our virtuous vixens get the shock of their life? 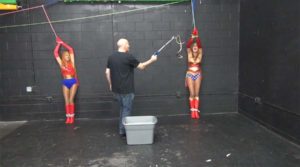 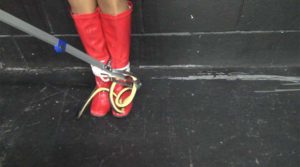 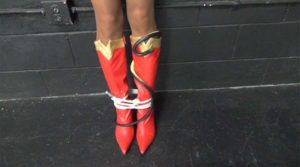 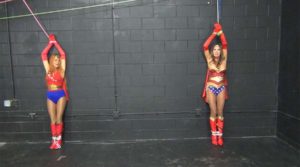 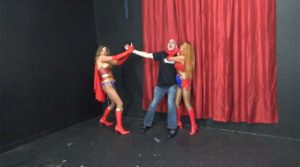 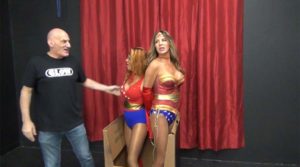 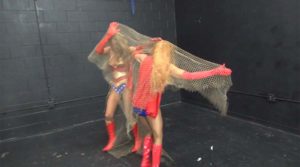 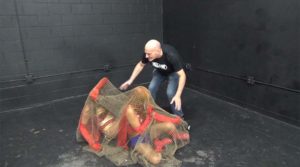 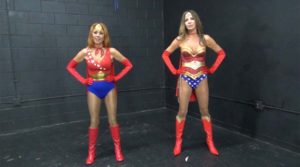 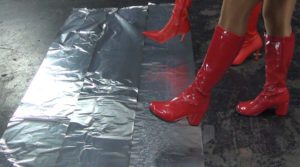 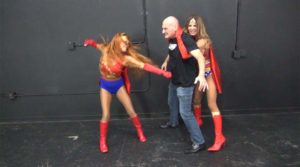 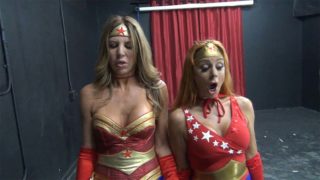 Attempting to surprise the boss, our intrepid heroines run afoul of his dastardly net trap and are captured. They struggle mightily but can’t break free until Wonder Womyn retrieves her trusty wonder blade from her boot and cuts them free. The sexy super heroines soon catch up to the boss and dispense one of their patented beat-downs on the luckless lawbreaker. Before they can administer the coup de grace, the fiendish felon once again turns the tables on our caped crime-busters, incapacitating them with an instant fog trap. When the smoke clears the heroines find themselves imprisoned in a hot box while the Boss blathers on about how they will be cooked alive. Our buxom beauties to end up like steamed vegetables?

Having escaped the hot box, the Curvaceous Crusaders pursue the boss back to the dungeon. While attempting to locate the elusive thug our heroines fall victim to a hidden rope trap and are strung up against the wall. The boss arrives and taunts the bound duo and attempts to finish them off by placing poisonous snakes at their feet. Trapped, tied, and completely helpless, Wonder Womyn and Wonder Gurl struggle to break free. Will our brave heroines be done in by a pair of slithering serpents? Holy Ophidiophobia!

This clip is for those who love super heroines in peril and fans of the 1960’s Batman TV series. The video features free moving camera work with multiple fight scenes as well as plenty of bondage and struggling, as more than once the overconfident heroines gain the upper hand only to have the tables turned and find themselves in one peril or deathtrap after another.

Although I enjoyed this, I’d like to see a female villain in future releases. Is this something that is likely to happen?

Thanks for for the post. Glad you enjoyed this one. Yes we do have plans for a villainess in the future. We’ve actually done that a couple of times before in “Amazons Cocooned” and “High Voltage” in case you wanted to take a look. Thanks again for the suggestion!

Thanks MF, I already have those 2 releases, I look forward to seeing what you come up with next! Do you have any particular actresses in mind yet, or is it still too early to say?

It’s a little early to say at this point, but I have been in touch with a couple of people. As always the tricky part with this business is finding actors who are local and then getting everybody’s schedules to mesh. Definitely on the docket for 2019 though, so stay tuned!

Sorry again for interrupting but I just wanted to say great to hear about the future with female villains! I hope you are able to find some more awesome people and they can work it into their schedules

What happened to Franchesca Le?

Thanks for inquiring. Francesca had to step down due to health issues – I do miss working with her. Hope you like Stacy – she’s great and brings something to the table as well!

They are both lovely ladies and I’m sorry to hear about her health issues, wishing her the best