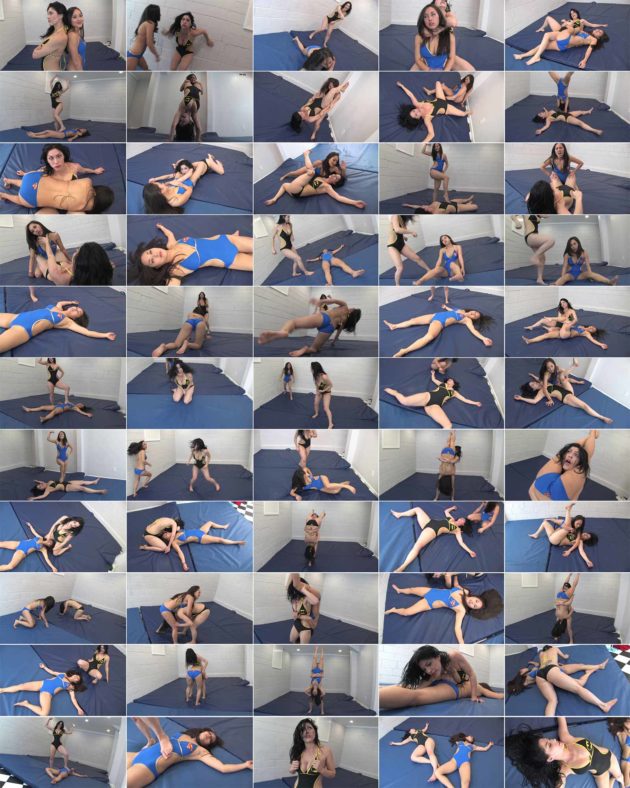 Kymberly Jane and Sumiko duke it out in this amazing multi-fall superheroine battle. The two do-gooders decide to have a friendly competition, with both heroines stripped of powers and gadgets to see who the best fighter really is!

round one: Sumiko wins a test of strength and dominates with belly blows, but Kymberly ducks a wall splash! She traps Sumiko in a tight sleeper that leads to the pin and win!

round two: Bat-Kym traps Sumiko in an upside down neck scissors, but Sumiko reverses it into a modified power bomb! Sumiko follows up with multiple cartwheel splashes until Kymberly is completely out (and even adds a bonus one just for fun). Just to make sure, Sumiko traps Kymberly in a brutal triangle choke for a second KO, the pin, and win!

round three: Sumiko dominates with a test of strength but Kymberly traps her in a body scissors, followed by multiple jabs to the face until Super-Sumiko is out cold! Kym continues her assault, repeatedly waking up Sumiko with a belly stomp…only to kick her in the face for another K)! A final sweeping kick to the jaw lays Sumiko out for Kymberly’s easy pin!

round four: the girls lock up and Sumiko nails a sudden atomic drop that floors Kymberly! Sumiko follows up with a neck scissors takedown, belly punches, and a swing out DDT KO for the pin!

round five: Kymberly ducks a clothesline and nails one of her own, stunning Sumiko. She follows up with several body slams and a tombstone piledriver setup, but Sumiko suddenly wraps her legs around her kneck and squeezes! Kymberly fades and passes out, dropping Sumiko on her head in the piledriver for a double KO and a bodypile!

FINAL ROUND: Sumiko opens up strong, trapping Bat-Kymberly in a brutal tombstone PILEDRIVER! She nails it and delivers ANOTHER one…but she can’t make the final 10 count pin! Sumiko goes for a regular piledriver but Kym reverses it! She drops the reverse piledriver and knocks Sumiko OUT…but she’s not done. She delivers her own Tombstone KO, followed by a final standard piledriver! Exhausted, Kym climbs on top of Sumiko and counts to 10 for the win!!! She dizzily goes for the victory pose but starts to feel faint. She collpases, out cold, next to her beaten opponent as SK announces…