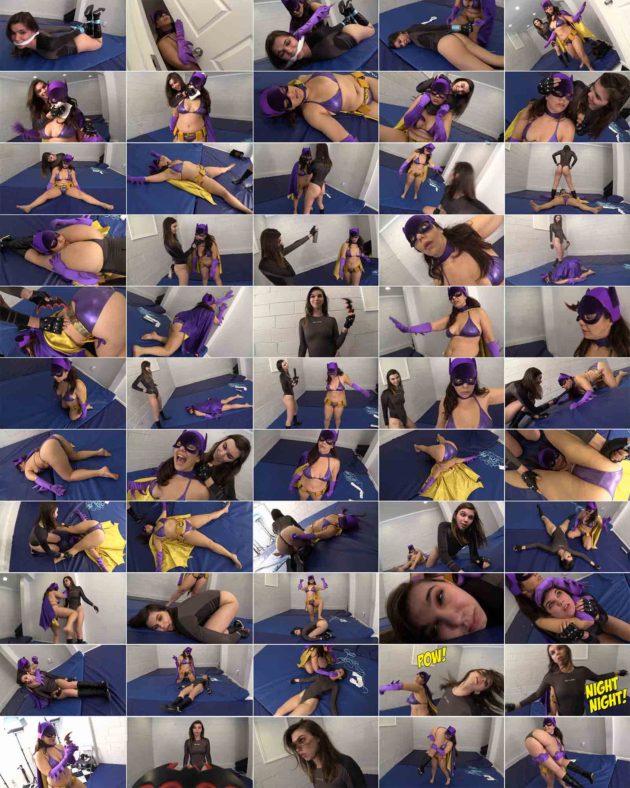 We open on Liv, hogtied and cleave gagged, struggling on the ground in a cheeky thong one-piece with black gloves and boots, whimpering as she tries to free herself. Enter Bat-Tracy, drawn to the sounds of Liv’s straining and struggles. Immediately she swoops over to help, fingers flying as she unties the knots, reassuring Liv in her own inimitable style. Once free, Bat Tracy leads Liv to escape, but all is not what it seems! Suddenly Liv pulls out a cloth and smother’s Bat-Tracy’s mouth, pulling the shocked crime fighter back against her as she struggles. Bat Tracy’s eyes roll and bulge wildly as she tries to escape, but the drugs are overpowering. Slowly she fades out, sinking to the ground as her eyes flutter closed, until she goes limp and still. Liv has plans, however, and brings Bat Tracy back around, only to sit her up and slap her into a Sleeper Hold. Bat Tracy claws at her arms, struggling and gasping, gritting her teeth as her eyes bulge, but Liv won’t let up, informing Bat Tracy that not only is this a trap, but that the whole room is wired with cameras to capture every moment! Bat Tracy struggles wildly, but the pressure is overpowering, as her eyes cross and widen, slack mouthed until she finally passes out. Liv once again yanks her back into consciousness, only to throw her against a wall, punishing her belly with running Knee Lifts and Belly Punches, as Bat Tracy can only stand and absorb the blows. Pulled into the middle of the room, Liv treats her to a series of devastating Face Punches, dropping her to the ground with a wild Uppercut before knocking her out with a brutal Right Cross, leaving Bat Tracy splayed on the floor.

A quick belly stomp wakens Bat Tracy quickly, as Liv then climbs over her, wrapping her neck between her thighs, squeezing the helpless heroine in a vice-like Inverted Neck Scissors. Bat Tracy thrashes and struggles, her mouth wide, eyes rolling as she gasps between Liv’s pert cheeks. Bat Tracy’s bulging eyes begin to flutter as her spasms slow, the lights going dimmer as she fades out once again. Liv enjoys a little Limp Play before Bat Tracy begins to show signs of life, getting woozily to her feet. But Liv has another surprise as she pulls out a can of Knockout Spray, taunting and mocking Bat Tracy as she stumbles around before hitting her full in the face with the gas. Bat Tracy wobbles and flops, wide eyes crossing until at last she falls to the ground, butt waving high in the air.
Eventually she comes to yet again, staggering to her feet, but Liv is prepared, this time flinging one of Bat Tracy’s Batarangs into her temple, making her stagger on weak legs before face-planting into the ground. Over and over Liv humiliates and toys with her, waking her only to knock her out again, using Billy Clubs and needles, but Liv gets overconfident and Bat Tracy sees her chance, jabbing Liv in the butt with her own needle. Liv’s eyes are now the one’s rolling as the drug sets in, and it’s time for a little Bat Justice!

Bat Tracy vs You 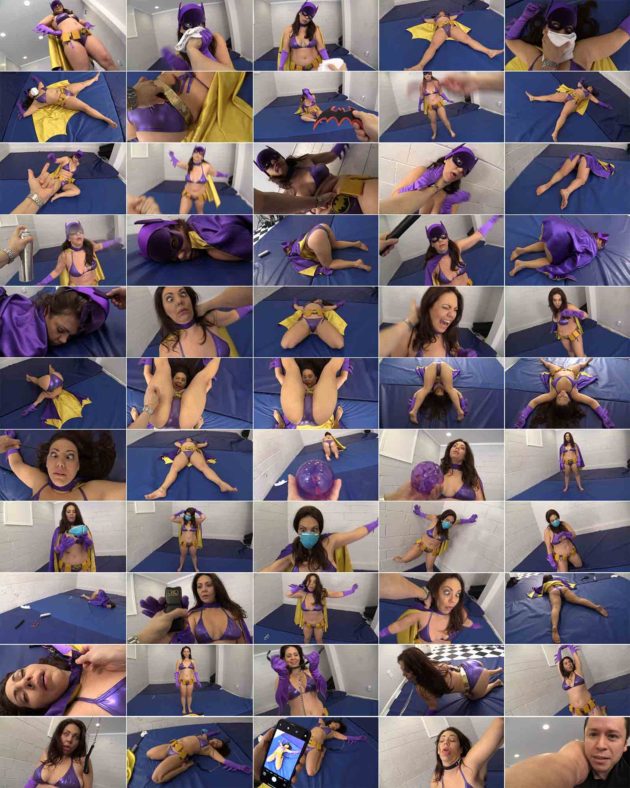 In this Superheroine Fantasy, we open as Bat Tracy stand over you, wearing the bikini version of her costume, mocking you for the easy defeat, bringing your crime spree to an end, and hoping to earn Wonder Woman’s respect. But you have a trick up your sleeve as to clap a soaked rag over Tracy’s mouth and nose, watching her eyes cross and bug and she struggles, but begins to fade quickly… slowly sinking down until she’s lying prone on the ground. You keep the cloth pressed firmly, making sure she breathes in every last fume before her eyes flutter and roll, and she goes totally still. After removing the cloth, you indulge in a little limp play, dropping her arms and legs with tight closeups, watching them flop to the ground. Then you roll her over, finding her hidden Batarang.
Slowly Bat Tracy begins to come to, slowly rising, stumbling to her feet, only to get pinged in the head as you throw the Batarang at her, ricocheting off of her skull. Bat Tracy’s eye go wide, crossing hard as she staggers, the drops backwards to the ground, knocked out again. Proving this, you dangle her arms and feet again as they limply fall from your grip.

Slowly her eyes begin to once again flutter open, and groggily she gets to her feet, determined to bring you down, only to run into your fist as you punch her in the face, stunning her. Another hit and she drops to the mat, still struggling to remain conscious as her eyes cross and roll wildly, but one last shot to the face knocks her out once more and she lays still. Once again you prove this to yourself, taking time to limp play with her arms and feet, slowly inspecting your handywork.

Bat Tracy’s eyes flutter open and she struggles to get to her feet only for you to throw her hard against the wall, targeting her exposed belly for a series of cruel punches that explode the air from her lungs over and over, making her buck and jump with the impact. Then you wrap your fingers around her throat, squeezing as she chokes, her eyes wide and wild, gasping and sputtering for breath even as the strength leaves her arms and legs. At last she collapses in a heap, her ass thrust humiliatingly into the air, knocked out. For good measure you flip her cape out of the way, exposing her rounded cheeks for a few playful spanks

You turn to your bag of tricks and select a spray can filled with Knockout Spray, then return to Bat Tracy just as she’s beginning to come around again. She comes for you on wobbly legs, her speech slurring and her eyes unfocussed, but a quick spray to the face sends her staggering back, wobbling unsteadily on rubbery legs until she drops down to her knees, eye wide and crossed, her mind starting to go goofy. Another spritz and she wobbles in place before folding over once again, crashing down to the floor with her butt wobbling up in the air, but she’s still moaning and struggling while her eyes flutter and roll. One more spritz for good measure and she finally goes limp. You play with her arms and feet again, plucking them up and dropping them to the ground as they flop lifelessly in your grip
Back to you bag of tricks, this time selecting a Billy Club before returning to Bat Tracy, patting her cheek to wake her, watching as she stumbles and struggles to get to her feet. The spunky superheroine relentlessly tries to bring the fight to you again, but is stopped in her tracks as the Billy Club bounces off her skull, her eyes instantly crossing as she wobbles and stumbles around, talking virtual nonsense. Another crack to the noggin brings her to her knees, swaying unsteadily. The third and final folding her over yet again, her ass high in the air for you.
Over and over you taunt your prize, making her eyes flutter, bug and cross as you use syringes, nerve pinches, pressure point attacks and hypnotism to play with your captive, poor Bat Tracy never getting a chance to recover before being knocked out again. After falling under your hypnotic control, she even knocks herself out with sedative soaked breath masks, tasers, and self strangulation. It seems counting you out was premature.