“Bats in the Belfry” from Jacquelyn Velvets

Jacquelyn Velvets, Kayla Lael and Tracy Jordan star in Bats in the Belfry. 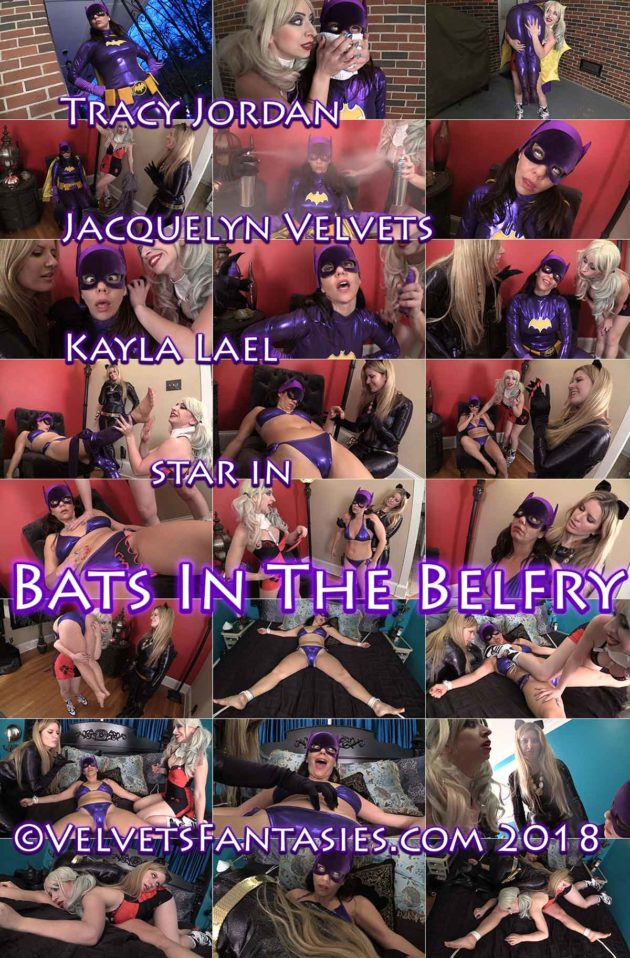 Batgirl has finally discovered the secret lair of two villainess vixens: Catwoman and Harley Quinn! She cautiously begins to infiltrate the building but is surprised with a chloroform-soaked rag delivered by none other than Harley Quinn. Harley then gleefully carries her inside and presents her to Catwoman as an unconscious gift complete with a goodie bag full of knockout out implements. Both Catwoman and Harley have their fun torturing the poor Batgirl by weakening and humiliating her the best way this evil duo know how! And just when it seems like Batgirl couldn’t possibly handle anymore, she’s knocked out by her own batarang and carried off once again by Miss Quinn.

When Batgirl awakens, she finds herself stripped down to her batkini, and tied spread eagle to the bed. Catwoman has sharpened her claws just for this occasion, as she gives Batgirl a taste of cat scratch fever! The villains decide to take the humiliation one step further by attempting to remove Batgirl’s top, but a trap was set via a heavy blast of knockout gas that sends both Catwoman and Harley into an unconscious heap on top of poor Batgirl! Batgirl opens her eyes, relieved that her trapped worked, but finds herself in even more of a bind realizing she’s even more helpless than ever before underneath her captors. We hope she’ll figure out what to do next, but not before a much-needed nap first!

Too bad that the site does no nudity at all, even toplessness. Because I have a custom, peril-prone heroine whose costume would require constant toplessness, but no lower nudity at all, and Kayla Lael has a pretty ideal look for her.

Been a big Tracy Jordan fan in particular when she portrays BatTracy for years. I always ranked her 2nd behind Cali Logan as my favorite Batgirl, but I’ve noticed a big change in the past year. First a slimmer Tracy, second newer outfits with one being the purple bikini, third improved storylines with great guest contributors and last but not least and the one thing that has not changed since her first video is her selling the peril and nobody better at limp play. She is now my favorite BG by far and this video has it all. It’s a… Read more »

Tracy is quickly becoming my second favorite Batgirl in peril after Cali Logan.