Entertainment Weekly has provided the first look at Brie Larson as Captain Marvel. 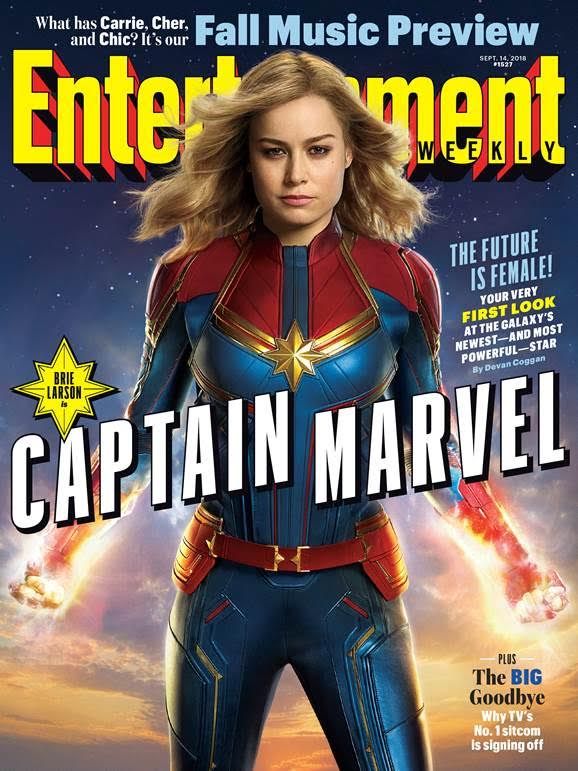 When Captain Marvel hits theaters March 8, 2019, it’ll be the 21st entry in the MCU — and the first to star a solo female superhero. In the past decade, the MCU has assembled a diverse lineup of female heroes, from witches and warriors to widows and wasps. But never before has a woman headlined her own story — until Captain Marvel, the part-Kree, part-human pilot who made her comics debut back in 1968.

I’m completely on board with this costume…I’ve always been quite happy for a heroine to be in a non-sexy costume. It just makes it all the sexier (or degrading) when you get them out of it…

Unless they have estrogen/muscles. (Which estrogen is the only hormone that builds muscles, aides in muscle repair, and prevents muscle lost in real life).

A woman out of costume is respectful when they have muscles. Same rule applies to us guys to I guess.

But therein is the problem: she’s not going to have any of her costume removed.

I have to say, I didnt like this costume at first but this preview makes it looks pretty fantastic, secondly I have to say, The original Ms Marvel Costume was the best in my opinion

From the looks of it, no…just long blond hair.

Possibly a sequel to the Rye Ms Marvel movie in the article below this one?

I guess all the abuse and degradation she suffered in that movie lead to her rethinking her costume choice.

Nothing I’ve seen makes me want to run out and see this opening night. But it looks interesting enough that I’ll keep following the updates as they come out. Not sure how I feel about the uniform.

Doesn’t look hot but it does look like an interesting comic book movie.
It’s amusing that the Rye Ms. Marvel is right beside this Ms. Marvel update. Quite the contrast in uniform, as has to be expected between the niche and the mainstream. Still…

Bored as fuck is more like it. She has no real facial expression in any of her publicity photos. She doesn’t look excited about the role the way Ruby Rose was excited about playing Batwoman. I’ll reserve judgement overall, since there are probably a lot of other aspects to this movie that may make it worth watching. But Brie Larson might very well not be one of them.

Based on the pics above, she (just like all the other actors) looks like she is just in character. All the shots look like they are in context of something in the movie. The last one, she just looks steely and determined to me, not bored. I don’t expect her to be giddy or excited when she’s about to face the Skrulls!