Marvel has revealed a few details about its upcoming Captain Marvel film, which stars Brie Larson.

• It’ll take place in the 1990s, apparently making it a prequel to the current Marvel Cinematic Universe™.

• Captain Marvel will face off against The Skrulls – “a race of shapeshifters that, in the comics, have invaded and very nearly taken over Earth,” according to The Verge.

Some concept art was also reveled, showing a costume design for Captain Marvel: 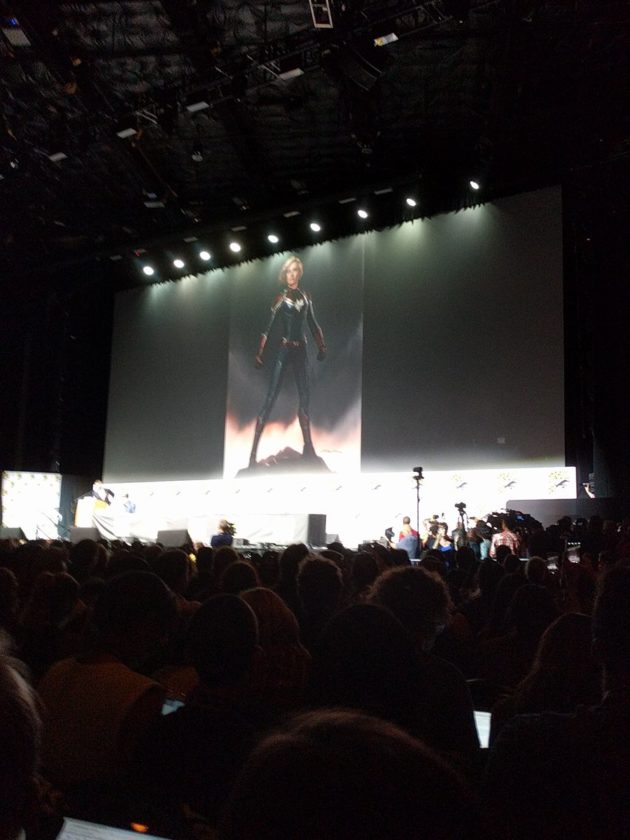 See The Verge for more info

What name would YOU suggest instead?

No I don’t think captain marvel should where her old ms marvel uniform because she has passed that title(moniker) to someone else.

SJW Marvel Comics is of course trying to wipe out all memory of the supersexy black-and-gold costume (even though its appearance was recent enough that you can still easily find graphic novels with it in the libraries) because male gaze/objectification whatever. So it’s the obligation of SHIP to keep that costume alive! I’ve seen some very good videos of models in that costume (not the least of which would be the amazing Angela Sommers making love to Anastasia Pierce’s Scarlet Witch) so keep ’em coming. Because I have a feeling that even if Brie Larson’s portrayal of Carol Danvers is… Read more »

What a lot of BS from a highly uninformed person. Marvel has put up mostly all issues of Ms. Marvel on Comixology by now, including those in her black outfit and even very hard to find team-up books from the 70s. And this very recently. They are not hiding her away. So they did with black and white magazines of theirs in which Coleen Wing of the Daughters of the Dragon fame (who is a TV character now) was turned into a heroin addictated sex slave. You cannot find these old issues unless you get them from Comixology where Marvel… Read more »

Good to hear, thanks for the correction! I’m glad the back issues with the old Ms Marvel costumes are available. Marvel, as a company, has put those back issues up because they know they will sell. But you also know that the current crop of politically correct editors hates the fanbase that liked the old Ms Marvel and wishes it would go away. Your last comment tells the tale: the interest in Captain Marvel and the changed costume “worked” for a little while and interest was sparked in the two Kelly Sue DeConnick books while she still looked feminine in… Read more »

While you are not wrong, you forget the most important thing: Marvel as a company is interested in only three things: 1. $, 2. $ and 3. (also equally important) $. When the Women’s Lib movement became a thing, they put out books like “The Cat” “Shanna The She-Devil” and “Night Nurse”. Black Widow shared top billing with Daredevil and there were references in the book about Gloria Steinem. They were not catering to the feminists, but simply doing this, because it was a “thing” and they wanted to expand their readership i.e. $. When Blaxploitation was a thing, threre… Read more »

Plenty of other reasons for sales struggles without invoking tired initialisms. Constant crossover events interrupting the individual narratives, retconning the shit out of everything, and passing the torch only to take it back. None of that’s new, but there’s a hyperactivity to it in recent years. Marvel Comics is going against the grain — the trend in movies and television is extended continuity.

Or because their books are really terrible at the moment? Their current EIC is as bad as Shooter was once he wanted to write all the books himself. It was different just a few years ago. I picked up a lot of Marvel books then, now zero. However, if you want great books (outside of Image), may I recommend Batman by Tom King and his upcomig Mister Miracle book (the previews for it look fantastic) and yes, Aquaman. Seriously, Aquaman is fantastic! Really 🙂

If I may throw out an idea as to the difference in perspectives, I would say that a lot of comic book writers see the world from the perspective of the need for more social justice in the forms we see in the comics. However, a significant part of the population that reads comics doesn’t see the need for the social justice from the comic book industry coming in the form of contrived racial and gender changes of established characters and the reduction in the overt sexiness of female characters (no changes to the way males are drawn–still mostly drawn… Read more »

You are totally right. Comic book creators will of course put into their books what they see around themselves, what society they envision, which I feel is a good thing. SF literature has always been about a look at what type of society we might end up with. And nobody is forced to read a particular book. I do not care for the current direction of Marvel, but less so because they “push” diverse characters, but simply because their talent right now is not very good. Most “name creators” have gone to other publishers. As an aside: there is already… Read more »

As a fan of Captain Marvel I want the comic black/gold outfit she look very sexy and feminine.

While the black and gold outfit was great, the new one has kinda grown on me. I don’t know how they will pull off the 90s storyline though, since she is also in the next Avengers movie which is set in present day (by the way: Black Widow will have blone hair, how about that), but the Skrulls as the bad guys sound great.

On the subject of a blonde black widow, I remember one in the comics about 20 years ago or so (and geez, I never thought I would write a comment like that–hard to believe it’s been 35 years I’ve been a comic book geek).

Yes, there was a blonde Black Widow. And I thought the same thing. I have read the issue of the FF in which the Skrull first appeared. Long time ago 🙂

It was never going to happen, but how cool would that black and gold outfit have been?

It would have been fantastic :,-(