“Caught in the Spider’s Web” from Max Frost 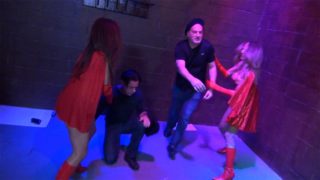 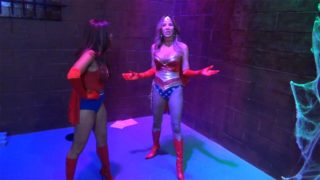 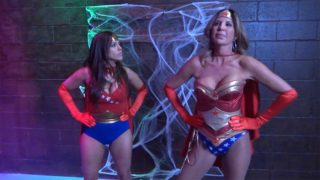 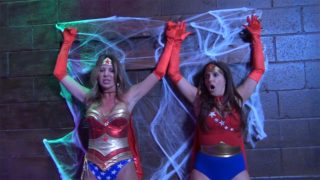 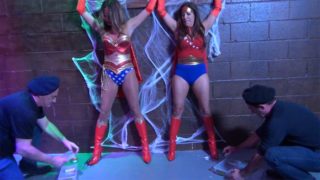 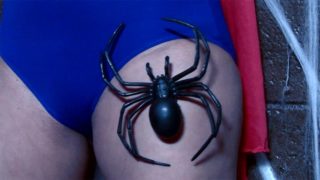 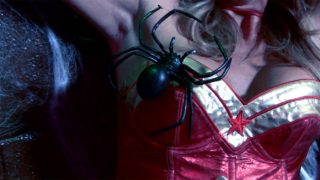 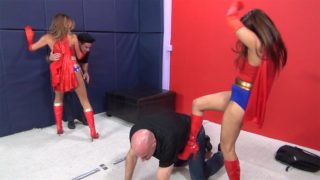 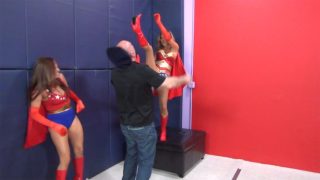 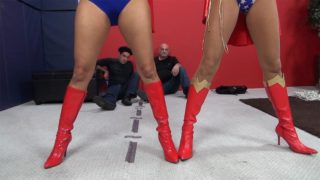 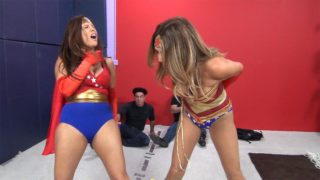 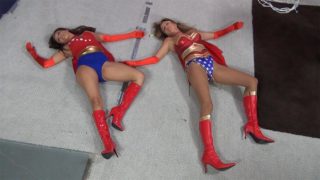 Wonder Womyn and Wonder Gurl enter the Black Widow’s lair. They are confronted by two henchmen who tell them to get lost. The heroines decline and instead beat the henchmen up. After dispatching both of them the super heroines arrogantly call on the Black Widow to surrender. Black Widow refuses and activates her web trap, pulling them backward into the web and holding them fast, struggling to break free. The henchmen return with two giant spiders. Wonder Woman and Wonder Girl can only watch helplessly as the spiders are placed upon their boots and slowly crawl up their legs. Summoning all their resources, the sultry super heroines manage to escape the arachnids and take off in pursuit of the evil villains.

Our heroines catch the henchmen in the act of trying to escape and quickly dispatch the two by administering their patented super-heroine style beat-downs. However the buxom crime-busters let their guard down and soon fall victim to a couple of well-placed sleepy darts. The slumbering beauties are then bound and carried off to another room while the henchmen await instructions from the Black Widow on how to dispose of the helpless duo. Slowly coming to, the caped captives once again call on their super heroine skills to outsmart the thugs and escape.

Wonder Womyn and Wonder Gurl re-enter the lair and again encounter the two henchmen. They make short work of the villains and knock them across the room. However the bad guys have other plans and soon the maidens of might find themselves trapped in a net, struggling to escape. The next scene finds the heroines side by side, placed on some sort of frame while the henchmen taunt them and explain that they are secured to a catapult and about to be launched to their doom. After the fiendish felons make their exit Wonder Womyn struggles to reach the remote control in her power belt so she can summon the invisible plane to launch a safety net to catch them. Will our sexy superheroines manage to escape this time?

This video is for those who love super heroines in peril and fans of the 1960’s Batman TV series. The video features free moving camera work with multiple fight scenes as well as plenty of bondage and struggling, as more than once the overconfident heroines gain the upper hand only to have the tables turned and find themselves in one peril or deathtrap after another. Other fetish elements include rope bondage, panty hose, bare legs, high-heeled boots, super heroines rendered unconscious then carried off.

And just as wonderful to see this series continuing, a great throwback to the classic wardrobe and peril