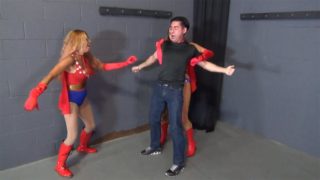 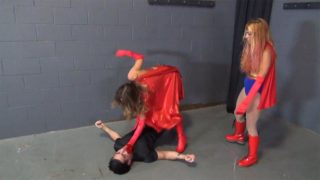 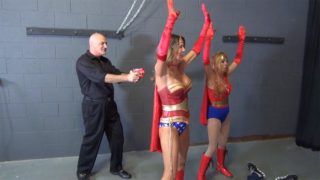 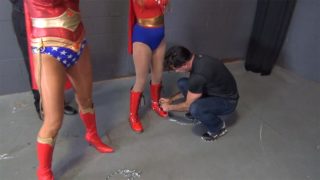 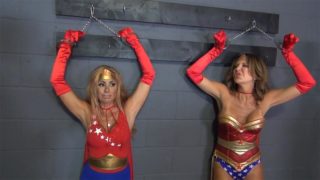 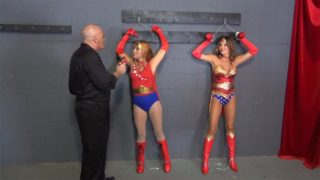 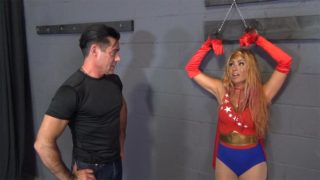 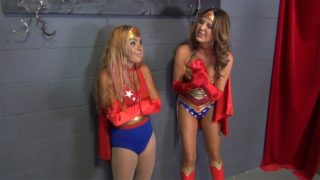 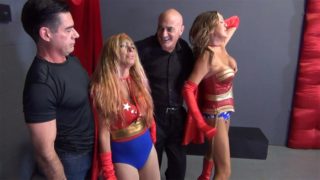 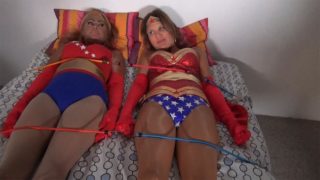 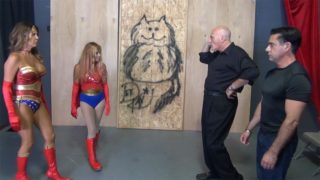 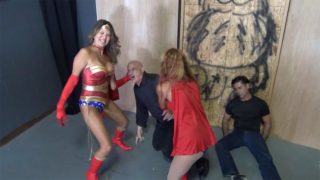 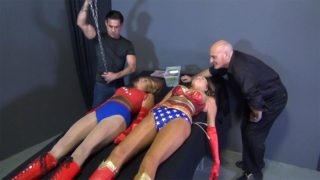 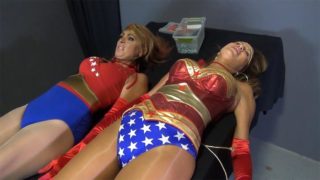 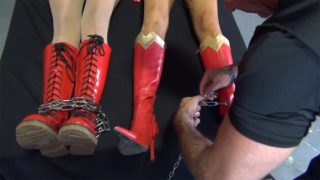 In search of a gang of notorious thugs, Wonder Womyn, played by the gorgeous Hollywood, and Wonder Gurl, played by the sizzling Stacy Burke, enter the villain’s lair and find themselves face to face with the boss and his henchman. The battle is on and as usual both bad guys get the worst of it. However the boss manages to get the drop on our unsuspecting heroines and they soon find themselves taken hostage at gunpoint. The heroines are the unceremoniously marched to the dungeon and shackled to the wall, after which the evil boss exits and leaves his henchman to guard the prisoners. However the caped captives use their super heroine skills to turn the tables on their captor and escape.

Finding themselves in another section of the cavernous villain’s lair, Wonder Womyn and Wonder Gurl once again encounter the boss and his flunkie, who attempt to take the sexy super heroines down only to get their butts kicked in the process. This time though the boss manages to take the buxom crime busters out with a couple of well-placed bonks on the head. The captured crime fighters are then strapped down to a mattress while a couple of industrial sized stitching needles hover ominously overhead. Will the trapped duo be stitched to death? We hope not!

Once again the sultry super heroines track the bad guys down and attempt to apprehend them once and for all. However the villains have other plans and as usual resist to the best of their ability, only to come out on the losing end of a patented super heroine style beat-down and wind up on the floor. However the evil boss has one more trick up his sleeve and manages to shock the unsuspecting duo with a stun gun. Completely immobilized, the glamorous heroines can only watch helplessly while the henchman chains them down and the boss calls the main office for instructions on how to dispose of them. What terrible fate awaits our heroines? Only time will tell!

This video is for those who love super heroines in peril and fans of the 1960’s Batman TV series. The video features free moving camera work with multiple fight scenes as well as plenty of bondage and struggling, as more than once the overconfident heroines gain the upper hand only to have the tables turned and find themselves in one peril or deathtrap after another. Other fetish elements include chain bondage, panty hose, high-heeled boots, super heroines immobilized then carried off.

Love these campy vids, but its time to change up the heroine costumes too Batwoman and Batgirl.