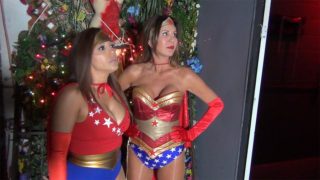 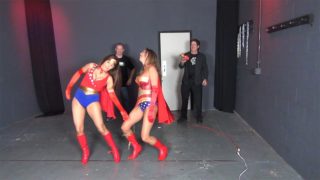 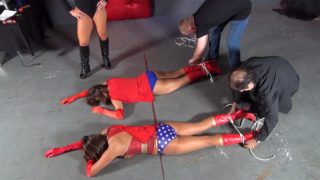 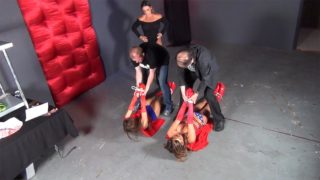 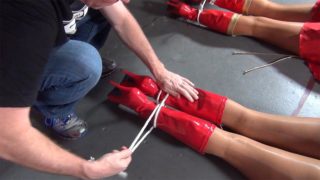 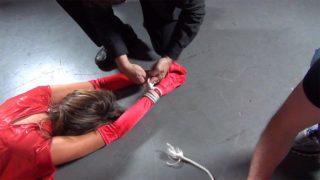 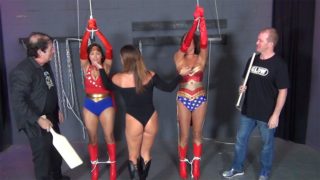 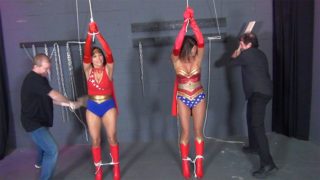 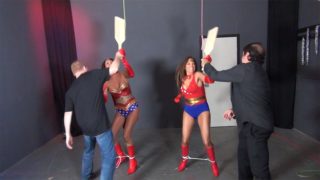 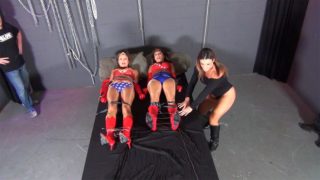 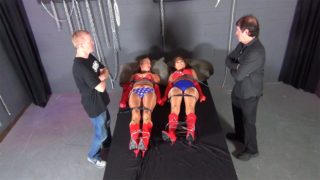 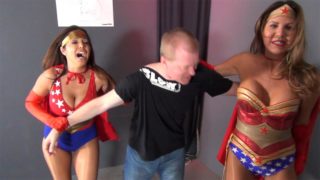 Having lost her crew at the hands of the Curvaceous Crusaders, Black Widow, played by the vivacious Jennifer Thomas, brings in a couple of new henchmen and sets a trap to take down Wonder Womyn, played by the gorgeous Hollywood, and Wonder Gurl, played by the sultry Francesca Le. Tracking the villains back to their hideout, the buxom crime-busters enter the lair only to be ambushed by the thugs and quickly rendered unconscious. Transported to another room, the caped captives are strung up by their wrists while the Black Widow taunts the helpless duo and two henchmen stand menacingly at the ready, each holding a jumbo-sized paddle. Will our heroines get the spanking to end all spankings? How in the world will they live this down?

Once again in hot pursuit of the elusive villainess and her cowardly cohorts, the sexy super heroines enter another chamber to find it deserted. While discussing Black Widow’s next move their legs are ensnared by bungee cords and the heroines are completely immobilized. Before the trapped duo can escape they are overcome by knockout gas and fall asleep. Black Widow and one of her flunkies arrive to claim their captives and carry them off. The heroines are then strapped down to a table as the henchmen attach electrodes to their feet, while Black Widow explains how the electrodes are connected to a high-voltage generator. Will our heroines be able to withstand thousands of volts of electricity? Will they receive the shock of a lifetime? Only time will tell!

This clip is for those who love super heroines in peril and fans of the 1960’s Batman TV series. The video features free moving camera work with multiple fight scenes as well as plenty of bondage and struggling, as more than once the overconfident heroines gain the upper hand only to have the tables turned and find themselves in one peril or deathtrap after another. Other fetish elements include suspension, rope bondage, leg irons, chains, on-screen tying, panty hose, high-heeled boots, super heroines rendered unconscious then carried off.

I am a huge fan of these “Batman” style super heroine videos and I admire the efforts by Max Frost. The campy stories with the appropriate amount of self righteous dialogue blended with the “spot on” action (fights, captures, bondage, escapes) is well done. Moreover, Francesca and Hollywood are perfect choices for these super heroines. IN all honesty, my only complaints are: First, TIGHTEN the bondage a bit-I am not asking for pro rigging but I think most TV shows have better and more realistic bondage than these movies. Second, can we please find a gag and the occasional blindfold?… Read more »

I would’ve said there was about one thing missing and now from the preview photos I think I see it now! Thank you very much!