“Curvaceous Crusaders: Up the River” from Max Frost Productions

Here’s a new release starring Hollywood and Francesca Le. Curvaceous Crusaders: Up the River is available for purchase here at Heroine Movies. 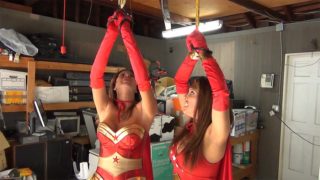 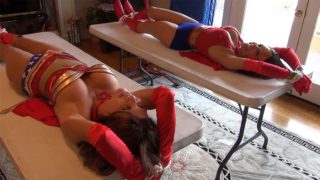 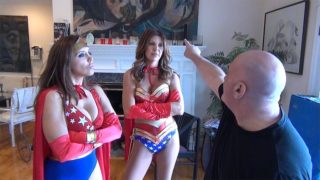 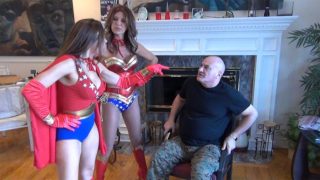 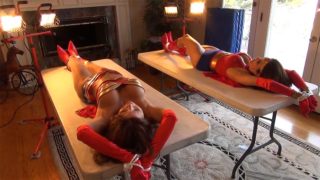 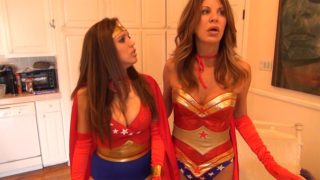 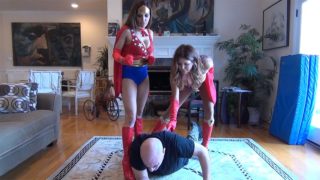 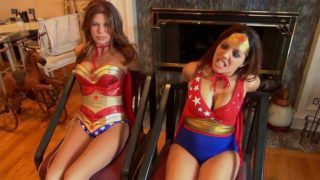 Having received intel informing them that the evil henchman Elwood has been promoted to Arch- Villain, our intrepid heroines, played by the gorgeous Hollywood and sultry Francesca Le, take off in hot pursuit to bring him in. They track Elwood to his lair and proceed to dispense their own special brand of justice, administering one of their patented super heroine style beat-downs. Elwood manages to give them the slip for a moment, but that only ticks them off even more and they knock him into next week with a double-uppercut to the jaw.

After dispatching Elwood and leaving him down for the count, our heroines proceed to look over his books so they have enough evidence to put him away for good. However Elwood has other plans, and once he recovers manages to trap and incapacitate the buxom crime busters with powerful jolts of electricity. He then transfers the caped captives to his warehouse, where he strings them up from the rafters and then encases their feet in quick-drying cement. After escaping this predicament, our heroines trace Elwood back to his lair and catch him before he makes his next move. As usual Elwood pays dearly for his evil deeds as the curvy crime fighters take great delight in subjecting him to another session of whoopass, leaving him beaten & battered. However, once again Elwood manages to turn the tables on the unsuspecting maidens of might, taking them down with a concealed can of knock-out gas.

The sultry sirens awake to find themselves secured to tables positioned beneath two powerful heat lamps, which once turned on will slowly cook the delectable duo to an untidy (messy?) demise. Trapped, tied, and completely helpless, they struggle and squirm in an effort to break free. Calling on their super heroine skills and resourcefulness, the heroines attempt to escape this predicament and bring Elwood to justice.

This video is for those who love super heroines in peril and fans of the 1960’s Batman TV series. The video features free moving camera work with multiple fight scenes as well as plenty of bondage and struggling, as more than once the overconfident heroines gain the upper hand only to have the tables turned and find themselves in one peril or deathtrap after another. Other elements include rope bondage, on-screen tying, AOH (arms over head) panty hose, bare legs, high-heeled boots, belly punching, KOs, super heroines rendered unconscious then carried off, and a whole lot more.

Kinda of hate it when the bonds are extremely loose and the actress can pop out of it at any time. The cuffs are hardly on their wrists (when it’s actually in the shot – that’s another thing, you want to see the bondage at all times in the shot). I really wish creators would actually tie the models up nice and snug and let us see the bondage.

I bought one episode and watched it. I dog the whole Batman 60s peril type theme and all but I hope you plan on using multiple actresses. Don’t get me wrong I like Francesca Le’s work but this type of thing could get old real fast.