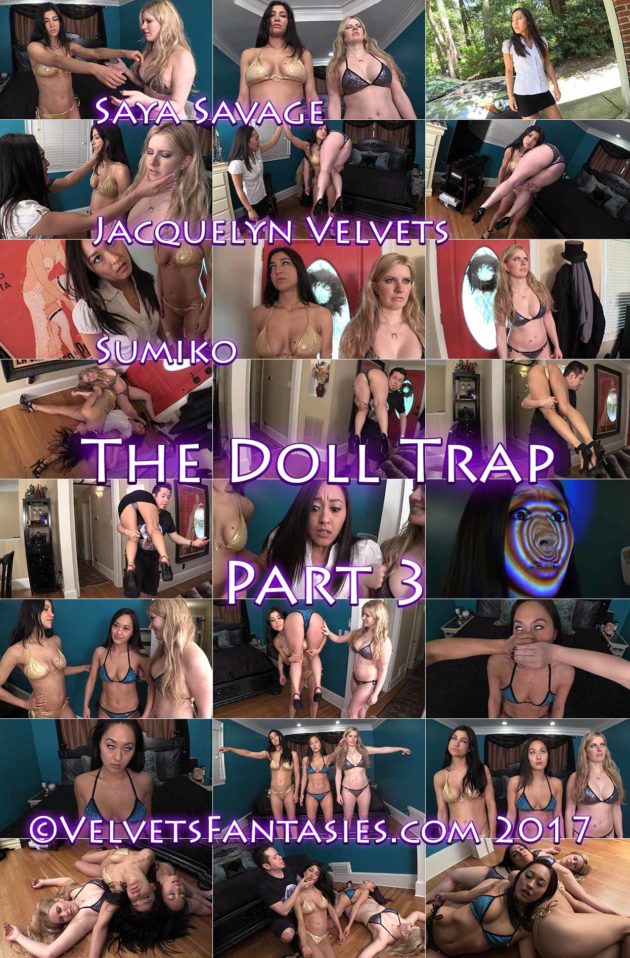 The story continues… We fade in on Saya and Jacquelyn, both turned into “dolls” by an evil warlock who seems to have disappeared. Jacquelyn suddenly breaks out of her spell, however, and tries to awaken Saya…to no avail. She grabs a phone and calls her friend Sumiko, asking her to help, but the very phone she uses emits a subliminal signal that turns Jacquelyn right back into a frozen state! Minutes later we see Sumiko make her way into the house. She finds her friends and is terrified at the situation but tries to help anyway, snapping Saya out of her spell. Saya carries Jacquelyn over her shoulder to escape but is suddenly switched back into doll state. A horrified Sumiko decides to make her escape, only to be blocked by Jacquelyn and Saya at the door. Sumiko rolls her eyes and faints from shock as we see the warlock (played by SK) step into frame. He ragdolls the ladies and over the shoulder carries them to the bedroom, where Sumiko is thrust into a game of cat and mouse. Saya and Jacquelyn become her captors, and eventually the warlock’s magic courses through Sumiko, turning her into a doll as well! The warlock appears and proceeds to play some sleepy games with the trapped trio, posing his dolls even as they slumber. A beautiful body pile is ragdolled and played with as the warlock uses his magic to send a distress call to yet ANOTHER one of the girls’ friends. We see the lovely Bambi Buttons make her way into the house, gasping as she sees her co-workers unconscious on the floor…right as the camera fades to black!!!