Filming has officially begun on the standalone Wonder Woman film. The film’s star, Gal Gadot, made the announcement on her Twitter account, along with an official photo:

Almost 75 years in the making… #WonderWoman is underway. pic.twitter.com/jCa0qRzuW8 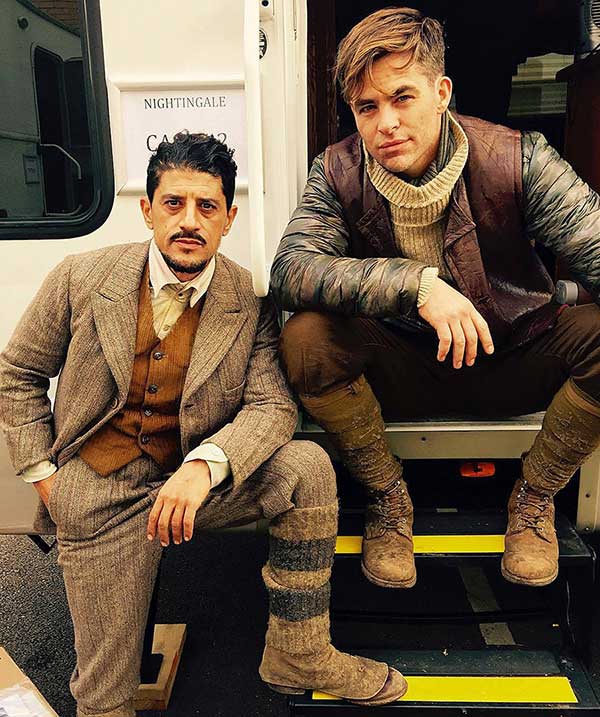 Wonder Woman, a Patty Jenkins joint, will hit theaters in 2017.

@ Lumpy: I’d get that toy Steve Trevor as well 🙂 Good point about Elektra though. However J. Garner was ok in Daredevil. The Elektra movie is a different story though. But since you bring up TDK rises: a lot of people lost their shit when the little girl got cast as CatWOMAN. Yet a girl did great. Anne Hathaway was the best part of that movie. Was she the best actress in it? No, that would be Marion Cotillard who was given poor material to work with. So long story short: what is the point of hoping that Gal… Read more »

@HorseWithNOName said “Do we truly think that if indeed she was horrible in BvS that Warner Bros. would have hesitated to postpone the shoot on the WW stand-alone movie and waited a while and re-cast? ” Well…to that point I would say, does anybody remember Elektra? When Daredevil came out, we heard the exact same criticism about Elektra….”wrong actress”…”costume sucks”. The studio’s response was “let’s give her, her own movie.” And the rest is infamy. A movie so bad and so forgettable, that I still run into people who have no idea an Elektra movie was ever made. Now I… Read more »

@ Judah: they are hiding him like J.J. Abrams it hiding Luke Skywalker 🙂

@Mr. Bleh, Yeah Gemma Arterton has had her ups and downs. I did like that hansel & Gretel movie she did. Im still not sold on Adrienne Palicki even with her on the Agents of Shield show. It will be curious to see how Gal Gadot’s WW is received in the BvS movie. That could possibly set the tone for the WW movie. @Mike Cannot comment on Alexandria D’Addario. Havent seen to much of her. @Horse Its curious that we have not seen any footage of Jason Momoa for the BvS movie. Although he has done quite a few conventions… Read more »

@ Mike: maybe the movie will be awful, maybe not. What is the point of naming names of other actresses now? I “wanted” somebody else for the role as well, but they cast Gal Gadot. Would it not be better to hope that the movie turns out at least ok if not great? And, maybe it is not apparent, but Gal Gadot is in BvS as WW. And that movie finished shooting a couple of months ago. Do we truly think that if indeed she was horrible in BvS that Warner Bros. would have hesitated to postpone the shoot on… Read more »

LOL This movie will be awful. Awful casting.

They should have casted Alexandria D’Addario! Please google her if you do not know who she is. She makes this plain actress look like a joke!

I do not understand how people with any kind of functioning think this movie is going to be good.

Judah – Think about it; Gemma Arterton vs. Gal Gadot. I also forgot Adrienne Palicki (which I guess we’re going to have to agree to disagree on). Arterton and Palicki come across as more…[I]athletic[/I] and IMO, you need that for any superheroine. I too was on the fence about Palicki, mainly because I was unsure about how good of an actress she is, but on ce she started on Agents of Shield, I was able to watch her week after week and I feel now she could carry this movie with no problem at all. Overall, I just feel either… Read more »

Just briefly, lots of work today, never said Bryan Singer’s Superman Returns was any good. But I think his comment to the fan about the costume is spot on, even though Lumpy sees it differently. He based “his” suit loosely on the old Fleisher Bros. Cartoons which was cool. Of course also on the Donner version. But, heh. There are plenty of versions of these characters (WW included) and that – in my mind – keeps them fresh. I can understand what we have seen of the movie version of WW is not for everybody, naturally, I like what I… Read more »

@Judah, We have been through this before. When it comes fantasy, nothing wrong with water boarding. We have different tastes which are personal. You may not see it in comics but I doubt that you will see rape and other similar scenes in comics. There are plenty of girl power comics and films. Your tastes and views do not take priority over every one else’s. Do every one favour, let this back and forth stop. I don ‘t have the same fetish as some of you in costumes, but you are entitled to your opinions and I respect that. I… Read more »

@Big Zee If you wanna join the conversation fine. Me and Horse and others we discuss different comic book inspired tv shows. We debate on what type of costume different Heroines should, could, or will wear in upcoming movies or tv shows. We listen to what one another have to say. We take interest because we all make valid points. Some of us are not happy with the casting of gal gadot as WW, so we discuss that or how her costume and character seem more in line with something else. Horse recommends tv shows, comics, and movies that I… Read more »

@Judah
Just call me lost, no worries. Nothing like sarcasm, eh!

@Horse Im looking forward to Leto’s Joker too. Seems as if he went with a punk style to the Joker. In different interviews with cast members they say that Leto stayed in character the whole time. Not sure if Heath Ledger did the same thing but I remember reading where he said the role of the Joker did take a toll on him. I understand your argument about costumes and all. I personally didn’t care for Bryan Singers take on Superman. Would be cool f they incorporated 2 or 3 different WW costumes in the movie. Oh yeah, you better… Read more »

@HWNN I wonder if you help me understand what is going on in these posts. There have been references and discussions with regards to Jessica Jones, Xena and Wonder Woman. Previously there was lots of chatter about Super Girl. It seems to me that there is a keen interest in ‘girl power’! I started watching Jessica Jones but was interrupted in the first episode, nevertheless it already looks very promising. Now we need a Velvet series. We do not get Amazon Streaming in Canada and so The Man in the Castle is theoretically not available here although there are ways… Read more »

First of all, Bryan Singer’s movie sucked and it had nothing to do with the costume. Second of all, this whole “what version of the costume” crap is a lame cop out. The WW costume has had variations made every so often but they have kept the same basic theme and design since the 70’s. That being said. They can, and would be expected to, create a new costume for the movie, just like Man of Steel and Batman. I just don’t like what they came up with. Nor do I care for the twig that they are going to… Read more »

@ Judah: we will see her in BvS in a couple of months. You can already see her in the latest trailer. As far as actresses / WW: they can never make everybody’s perfect version, and I am very ok with that. We got Ledger’s Joker and I am looking forward to Leto’s Joker. I already know the comics’ versions of WW and the Carter TV version. I want something new and different. And of course, if you (loosely) borrow from Ancient Greek designs you will have something that looks at little bit like Xena. I think Bryan Singer said… Read more »

I’m not sure if one actress would have been better over another one. All I can do is hope they make a good WW with respect to the origins of the comic and fans. I did enjoy the Lynda Carter take on WW. I remember a couple of years ago there was a pilot for WW show staring Adrianne Palicki that never got aired because it was so aweful. Then again I never did like Adrianne Palicki….even in GI Joe. All we can do is wait and hope for the best. At almost 18 months away it’s going to be… Read more »

I still say Gemma Aterton would’ve been a better choice.

@LUMPY Let’s get it right, “scrawny Xena posing as a Sith Lord”.
Nope, this ain’t my WW either. Be honest people, if nobody knew that they were making a WW movie and this was released as a publicity photo, would ANYBODY here immediately think “Oh wow! They’re making WW movie!” ? In a word, no.
The only thing I am hanging my hat on is that underneath that poxy cloak she’s actually wearing an authentic version of the costume. Otherwise people are going to just think they’re watching another in the “300” series of films…
Rant over

@LUMPY Let’s get it right, “scrawny Xena posing as a sixth Lord”.
Nope, this ain’t my WW either. Be honest people, if nobody knew that they were making a WW movie and this was released as a publicity photo, would ANYBODY here immediately think “Oh wow! They’re making WW movie!” ? In a word, no.
The only thing I am hanging my hat on is that underneath that poxy cloak she’s actually wearing an authentic version of the costume. Otherwise people are going to just think they’re watching another in the “300” series of films…
Rant over.

@LUMPY
Not to my eyes, but you’re entitled to your opinion. Gonna be an awesome movie for me visually if not for you. But maybe in 2020 there’ll be a reboot and that actress will suit you. Who would you want to see as WW in 2020?

Of course, that’s why they’re making the Wonder Woman movie and not a scrawny Xena movie.

All the world is waiting for Wonder Woman,…not scrawny Xena.

Excellent. Also looking forward to this. “All the world is waiting for you…”

Two years…ah, can’t wait! Also, looks like Said Taghmaoui (what’s his role – that’s him next to Chris Pine) is set to be the most famous actor of Berber descent…

@ Sugarcoater: and, what I find so amazing as well: no borders anymore as far as content is concerned. Shows like Supergirl, Gotham, The Man in the High Castle and of course Jessica Jones become available worldwide immediately… well for the most part anyway. That was unheard of only some years ago. Movies open on the same day across the globe, for the most part. Amazing. By the way: I believe the guy next to Chris Pine was on Game of Thrones. Too lazy to google him. If this is him, we are in for a great ride. The guy… Read more »

I agree with you Horse. It’s amazing to think how far the comic book world has come. Growing up in the 80s and 90s, I could never have imagined what is happening today between the DC and Marvel movies, shows like Gotham and Supergirl going mainstream, a company like Netflix making series such as Daredevil and Jessica Jones, and of course the sexy and well made heroine peril videos we see here. Never been happier being a superheroine fan! As for the WW movie, I think it should do well based on nothing more than a hunch. But as DC… Read more »

I saw the pic today. Looking forward to it. Have yet to watch Jessica Jones. Great reviews so far, but I am in the middle of The Man in the High Castle. What great times we live in. Marvel and PKD on TV and WW in cinemas soon. Man!