Kandy Crisis #10 is here for your enjoyment, and as usual, I will not be giving away any episode ending spoilers. This is one of the shorter episodes of the series, so I’m going to make this a simple bullet point review where I’ll try to highlight the more fan service oriented points of the battle. 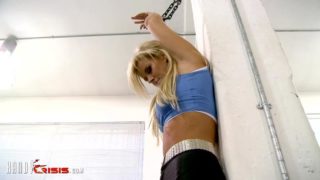 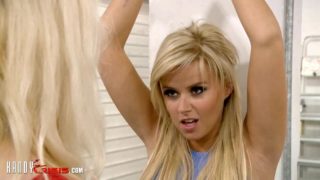 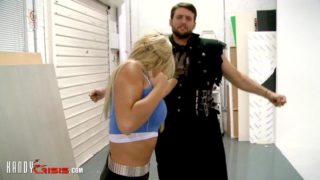 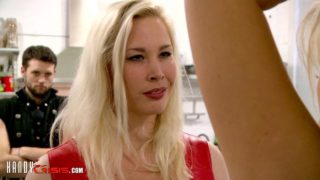 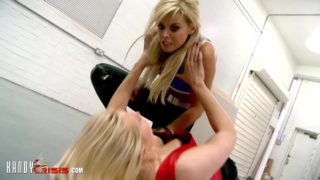 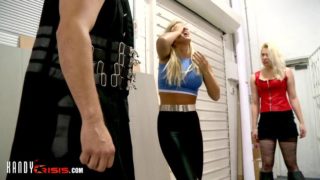 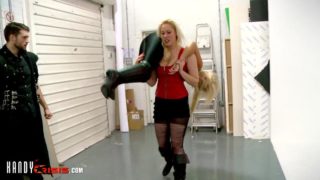 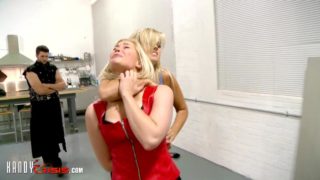 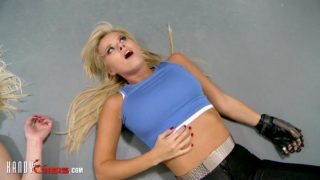 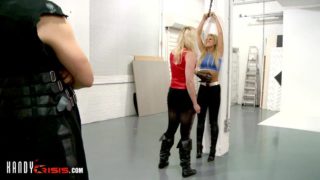 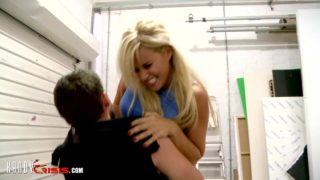 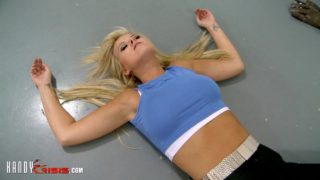 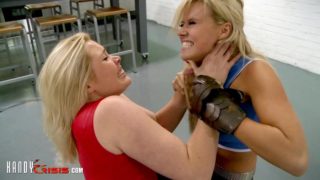 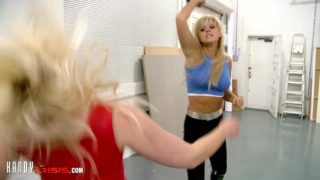 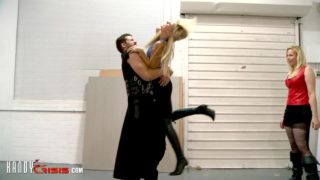 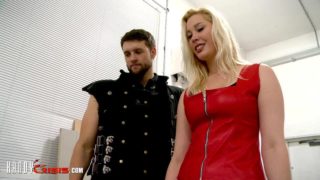 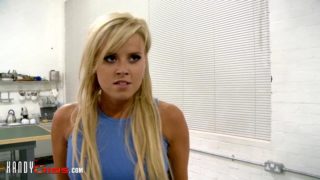 • This is a very close up, hard hitting fight. Most of it is Hit Woman taking on AJ, but Soren does make his presence known throughout the action.

• All the moments in the trailer are present, except here, those moments are longer. Specifically, AOH, stomach punches while AOH, shock torture, a lot of use of the shock glove during the fight, multiple choke holds, a bearhug (Soren to AJ), and a couple of knockouts.

• Two things that I think were pretty obvious watching the film is that even after all the training that AJ has done, Hit Woman is still the much stronger fighter, while AJ does appear to be the better fighter. Barely.

• The last moments of the action in this film aren’t so much a fight, but rather a test of wills. Basically, it comes down to who can take more, AJ or Hit Woman. You’ll see what I mean.

There’s really not much more to say. It was an episode of the series that I was very pleased with. It’s my favorite mini-series ever and I wouldn’t change a thing about how it has played out thus far.

On another topic that I just never had time to comment on: The recent post that featured Vixen dressed as Wonder Woman generated a lot of response and I couldn’t help but notice that many of our readers have an overwhelming urge to see poor Vixen get destroyed.

Unfortunately, that has never happened with her dressed as Wonder Woman, but there’s always the upcoming custom season if that’s what you want to see. However, below is a definitive list of films where Vixen either takes quite a beating or is flat out killed.

Kandy Crisis #2 – Hit Woman breaks Vixen by targeting her stomach, back, and ribs through most of the fight. Vixen displays next level acting skills that I didn’t know she had in this film. I think this is the best of the list.

Femmes of Tomorrow – Vixen gets her neck snapped by Silver. Commissioned by Darklord, one of our readers.

Twin Femmes – The actress that plays Vixen actually plays Vixen’s twin sister Jordan in this episode. It ends with Jordan getting her neck snapped.

Femmecats – The rookie Kandygirl Skylar kills Vixen by poison and then defeats Hi-Kix.

The Femme-Tastic Four – Vixen and Kix get throttled by fembots for a good deal of the episode but do emerge victorious in the end.

The Femmes and the Furious – Silver knocks out both Vixen and Kix leaving them on the ground with their hands tied behind their backs.

Purchase this video at Kandy Crisis

Great combat action which is the hallmark of the Kandyman films. I would have preferred a longer film and more of a beatdown at the end. Nevertheless, this is great stuff and highly recommended.

Awesome series, AJ and Hitwoman were amazing, Loved the whole thing, hope it returns somehow but if not, it was great.

We are generally asked not to spoil that in the Kandy Crisis reviews. Maybe contact one of the producers for more info. I think KAK or NGC would be happy to help.

Off the top of your head could you tell me which AJ kandy crisis ep has the most belly punches?

I’d have to say Episode 4 of the series which is AJs first appearance. It’s the longest episode that she appears in and one of the best episodes of the series. AJ takes a real pounding and there are stomach blows throughout the fight.

I need more information about NGC season 4. Is the Harbinger from last season coming back? Or will be another actress playing her part? Because i loved the last girl

Next Global Crisis
Reply to  Beast

If she does come back it will be her

Beast
Reply to  Next Global Crisis

Thanks for the reply! Hope she comeback. I would love to see her fight celestia

Jim
Reply to  Next Global Crisis

AJ. That perfect midriff. AOH. Like a fantasy come to life. Just awesome. Question about the ending. Are things really done? I mean the series as a whole? I thought that’s how to interpret it but I couldn’t be totally sure.

I don’t want to spoil it!

Awesome! Can’t wait for this one!

the AOH scene doesn’t look that great but I’ll give it to them for trying. Hope the girlfight fans enjoy

MAV
Agreed. Maybe they can do a better one down the road with another actress.

Leave it to the fine folk at Kandy Crisis to dispel the notion that Friday the 13th is unlucky! 😉

I can’t wait to see this one!

Miss Suppression KOed for all to see her helpless, mouth ajar and limp? Hallelujah!

Though I wish it was Vixen in this episode I will gladly accept AJ, maybe Vixen in the next one?