Fans of knockouts, mystery, twist endings, spy-based drama, and more will love this brand new Velvets Fantasies release…starring Jacquelyn Velvets, Hannah Perez, and Saya Savage! Jacquelyn stars as Mona, a woman whose beauty is only outweighed by her cunning, as she lures Cindy (Hannah) and Jill (Saya) into her home for a girls-only makeup party. After tricking Jill into leaving the room, Mona proceeds to slowly render Cindy unconscious with a mixture of sleepy moisturizer and an ether-soaked cotton pad. She hides Cindy and Jill enters, only to take her own knockout via Mona’s drug-laced fingernail digging into her skin. Mona drags Jill off, who later awakens in a bedroom. She finds a gun and hears a noise behind her, firing what she thinks is a bullet into Cindy’s chest. A stunned Cindy grasps at herself and collapses as Jill screams in terror. Jill tries to escape but the room fills with gas, knocking her out cold.

The two ladies awaken again, with Jill surprised to see Cindy alive. Turns out the gun was filled with tranquilizers. Next comes a poisoned water supply, Mona’s antidote, another tranquilizer KO, and a finale jam-packed twists, knockouts, and turns that lead to a kiss, the sudden twist of a knife, the forced POV swallowing of a cyanide capsule, and a single woman (can you guess who?) leaving the scene unharmed…

This one is classic noir, peril, and damsel in distress action at it’s very best. Order now!

The Love Who Spied Me Part 2 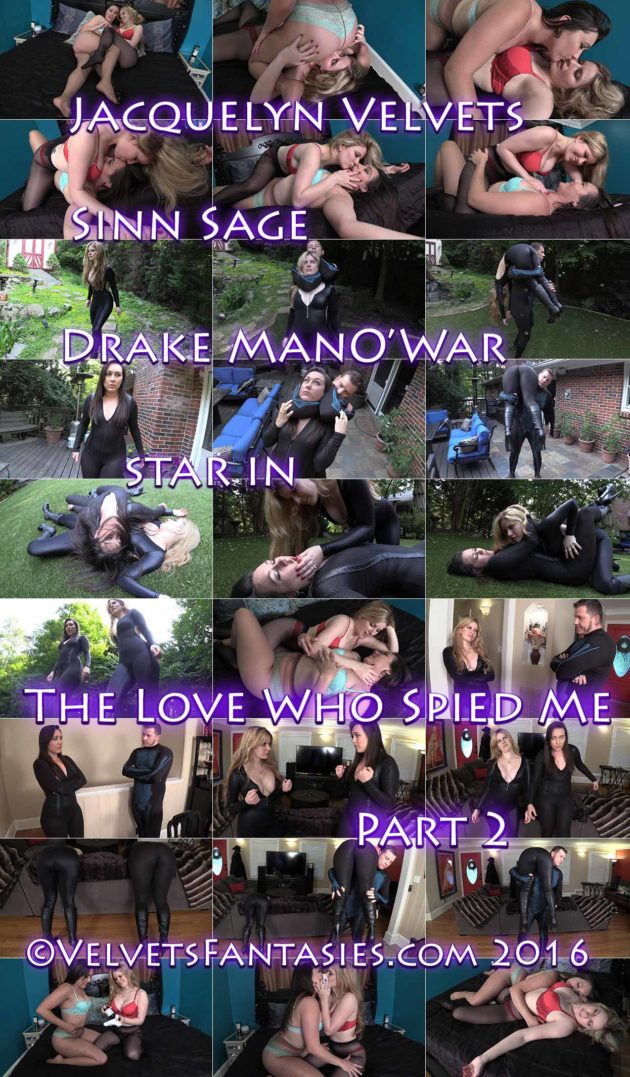 We fade in on secret agents-turned lovers Jacquelyn Velvets and Sinn Sage as they snuggle in their bed, reminiscing about old missions and the art of the knockout…which they both think they’ve mastered completely. After a playful argument over who’s more effective at taking an opponent out, Sinn attacks with a facesit, enjoying every second it takes for agent Velvets to fall asleep. She kisses her sleeping partner, who comes to and replies with a playful breast smother that eventually drains Sinn of all consciousness. Jacquelyn delights in kissing and caressing Sinn, waiting til she awakens. Exhilarated by the contest, both girls talk about the time they first met, and we flash back to both agents dressed in sexy black catsuits…both stalking their targets only to get knocked out by a mysterious male agent known only as “Drake”. He carries them both into a body pile and leaves before they awaken. The ladies come to and attack, exchanging KOs before finally deciding to form a truce in order to take their mutual enemy out. We cut to the agents back in the bedroom, reminding each other of the one time Sinn turned on Jacquelyn…an adventure we once again flash back to, culminating in a series of twists, KOs, and some devious manipulation on the part of Drake…leading to both ladies unconscious and carried away yet again!

Back in the present, Sinn feels a bit guilty about that “one time” she double-crossed her partner and offers Jacquelyn a free knockout. Jacquelyn in turn offers a double KO in order to clean the slate and Sinn happily accepts. The two lock in a kiss blocked only by a chloroform-soaked rag, fading out and managing a final actual kiss before passing out, side by side…

The Love Who Spied Me Part 3 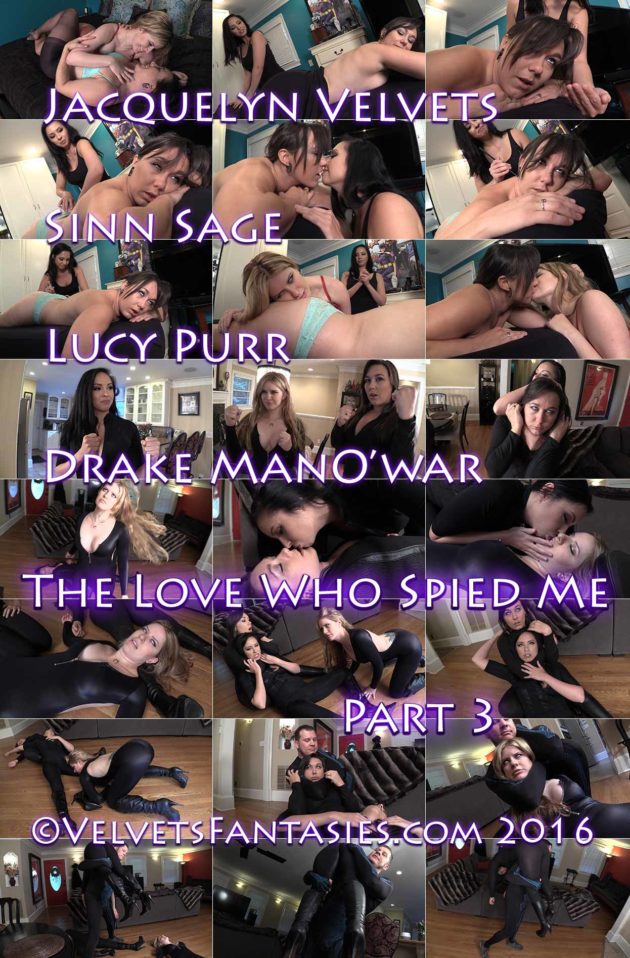 We fade in on agents Jacquelyn Velvets and Sinn Sage, snuggling and kissing in bed as Velvets surprises her with a gift: she’s hired a beautiful massage therapist to work on her after a long day. Sinn is beside herself with glee as we fade into the therapist (Lucy Purr) getting Sinn ready for a relaxing session. Little do the agents know, however, but Lucy herself is a rival agent tasked with finding vital information stashed in their home. Lucy uses a special massage and scent oil as well as some well placed chopsticks on vital nerve clusters to repeatedly knock Sinn out during the massage, but she can’t find the target flash drive. She finally uses a drugged syringe to put agent Sinn out for a few hours, but Jacquelyn interrupts the session. Lucy offers a small neck massage and uses the special sleepy oil to knock Jacquelyn out cold. Convinced that the flash-drive she’s looking for isn’t in the room, Lucy leaves and searches the rest of the house. A while later the agents come to and figure the situation out. They suit up and we cut to agents Sage and Velvets squaring off against Lucy. The ladies are clad in skin-tight black cat suits as they battle, but Agent Purr is way too fast for them. Within seconds she knocks both girls out, but a sudden twist leads to a double KO between Lucy and Sinn that leaves three ladies unconscious on the ground. A mysterious male known only as “Drake” makes his way in, and it’s soon obvious that he’s Lucy’s boss…and that he’s found the flash drive while Lucy kept the agents busy. Sinn and Jacquelyn awaken but Drake quickly puts them out with back to back sleeper holds, only to carry all three ladies off over his shoulder: Lucy destined to go back to base, and agents Velvets and Sage headed for a dark cell in an underground bunker.

Will the love-crossed agents live to fight another day?

Only time will tell…