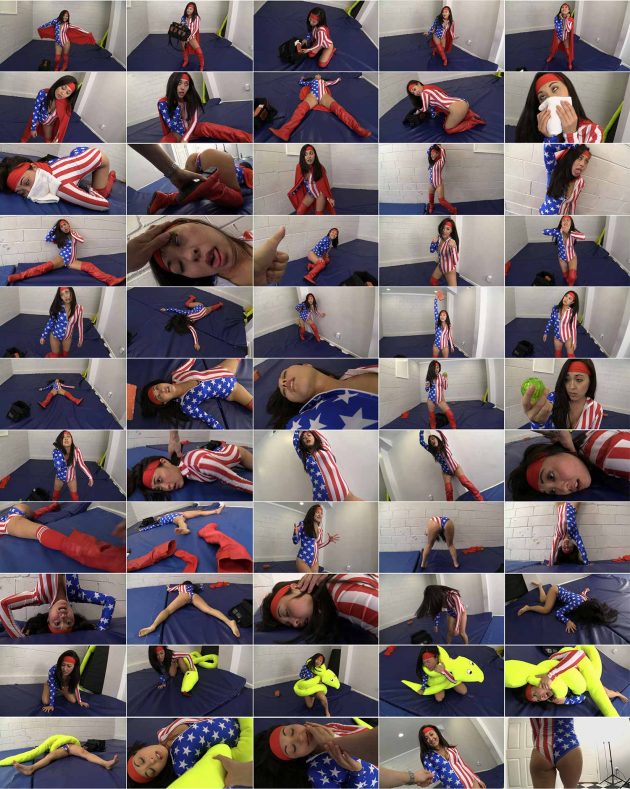 Fan favorite Sumiko stars in this incredible invisible opponent POV clip in which ‘you’ co-star as her boyfriend. She starts out by telling you to ‘wait, wait, wait!’ as she puts the finishing touches on her outfit. When she is ready for your eyes to see, you look up and see the Asian beauty decked out as Americana. She goes on to tell you that she’s always felt strong and powerful dressed up like the superheroines she idolized throughout her childhood. Who are you to keep her from that? Sumiko then touches on a conversation you two had the previous evening, one in which she had expressed her passion for superheroines….but she slowly admits she left a key element out of the conversation, one that she’d like to experience with you. Shyly, Sumiko tells you that seeing the superheroines in situations of distress, ESPECIALLY ones in which they are rendered unconscious, gets her ‘warm and tingly’ (if you know what she means, which you do)!

Now that she has entrusted you with this secret fantasy of hers, Sumiko is ready to go on a roleplaying fantasy with you. She has a bag of ‘tricks’ and a hoard of ideas to go along with it. The goal of each scenario will be to leave her helpless and unconscious.

Sumiko tells you she’s going to jumpstart the roleplaying with a bit of wrestling, considering it’s her area of expertise. You readily agree, and let her take center stage. Sumiko dives into a scene in which she explains in detail that she is stalked and attacked from behind, with a rear naked choke swiftly applied. The villainess almost gets her out, but lets her go momentarily only to re-apply the hold and finish the job. Sumiko is a vision of sexiness and beauty as she perfectly depicts what the true reactions would be if the sleeper were to be actually applied.

Sumiko goes on an adventure through several different scenarios, all of which center around her being a victimized heroine that is slowly (yet ultimately) rendered unconscious, amidst a bevy of eye rolls.

Following a truly epic POV experience with exciting and realistic scenes, Sumiko tells you she is going to wind things down and wants to do so with the most DANGEROUS wrestling tactic she knows of: the piledriver. She explains that the villainess sinks in a deep belly punch to bring her head into position before she is pile driven. Sumiko is actually able to pile drive HERSELF in this portion of this clip.

Once the piledriver sends her out, Sumiko comes to and is flipped backwards in a tumble back to the ground. She can’t see her enemy, but she can hear a suspicious ‘sssssss’….she goes to investigate, when she is attacked outright by an enormous anaconda! The mammoth sized snake winds itself up around her body, and slowly, EVER so slowly squeezes her until all air and blood flow is stopped completely. Sumiko is left completely limp, tongue out and helpless in the clutches of the beast.

Now that the roleplaying is done, Sumiko stands, blushing, and thanks you for making her fantasies come true. Being the generous girlfriend she is, she takes you by the hand and leads you upstairs to the bedroom, where she wants to play a different type of game that YOU may like. 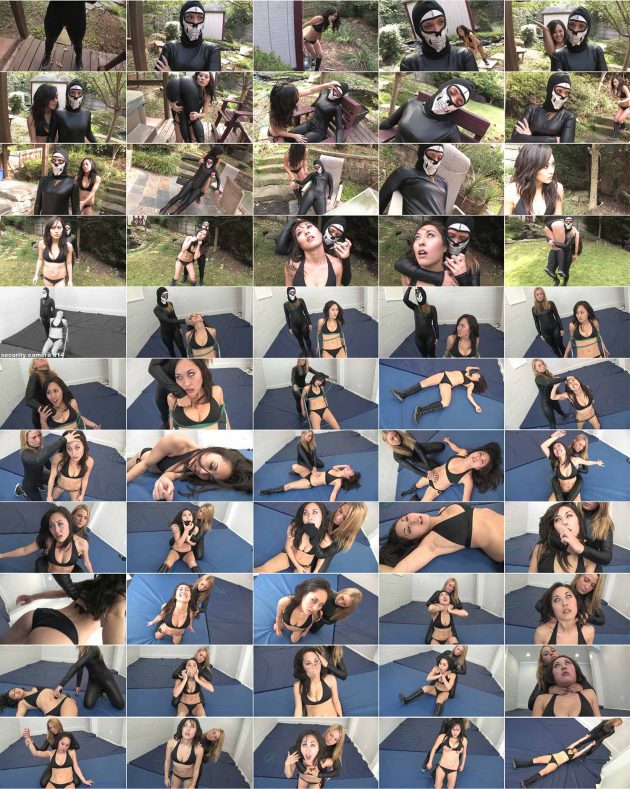 Bikini clad Sumiko arrives at SKW’s daytime compound to take out a crew of sentry clones known only as ‘Inga’. Things seem to go in Sumiko’s favor at first as she takes the first masked Inga (Ivy) out with a neck chop and over the shoulder carry before placing her in a chair.

Sumiko’s next encounter doesn’t leave her fairing so well. The sentry clone and herself fight back and forth outdoors, and unfortunately for the beautiful Sumiko, she falls unconscious after a neck nerve pinch and injection. She’s then being carried off camera…

We fade back in to Sumiko bound to a chair with a de-masked Inga standing guard. Off camera we hear a voice issuing questions: “Who are you? Who sent you?” to which Sumiko refuses to answer. That’s all well and good, as the mysterious speaker (Jacquelyn Velvets) knows Inga has an array of pressure point tactics at hand to coax the information she wants out of her adversary.

For the duration we watch as Sumiko is plagued by KO after KO by the demands of the speaker yet at the hands of Inga (Ivy). Sumiko barely has time to mutter out an intelligible word before Inga pounces on her with another torturous method of answer extraction. Inga’s styles of attack are exhausting as they extend the time it takes for poor Sumiko to become rendered unconscious.

Following a series of sentry attacks, the mystery speaks deems Sumiko unfit to answer any more questions and suggests Inga ‘put her out again’ so they can make another attempt in the morning. Poor, poor Sumiko…

I bought Confessions. It’s FANTASTIC. Sumiko looks beautiful and gives a very convincing performance. I would have liked some of her fantasies to be a little rougher, but the video is the first one I bought in a while from SKW, and one I’ve kept handy and didn’t just file away after watching a few times. Highly, highly recommended.

Sumiko and her six-pac-abs of justice. LOL somebody had to make this comment. I put Sumiko right up their with Randy Moore, Erika Jordan, Ariel X, Cory Chase & Brandi Love.