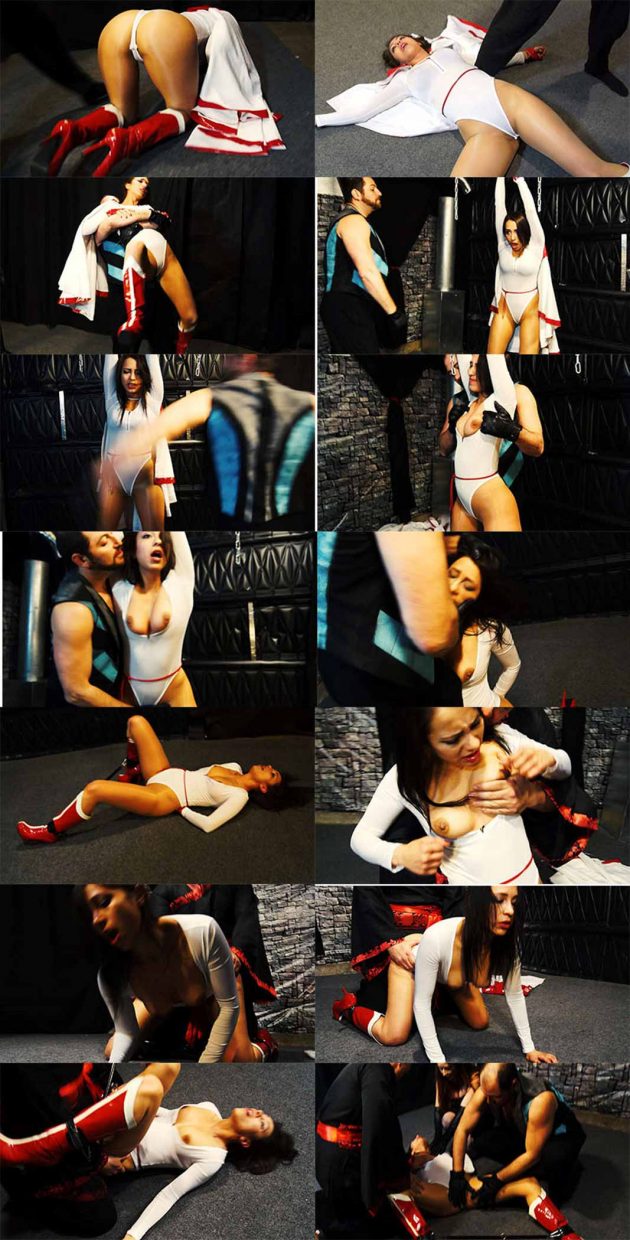 Scarlet faces off against The Dark Queen and her associate, Quake. While Scarlet is clearly stronger than both of these villains, when the Queen pulls out some red Kryptonite, it’s over for Scarlet. Quake lands a few low blows then scoops her up into a bearhug. Scarlet can barely breath when he slams her down into a back breaker. The Queen takes her turn as well, and knocks Scarlet out.

Meanwhile, Scarlet’s boyfriend, Cyclone has been captured as well. As Scarlet is strung up AOH style, the villains work to play the 2 heroes against each other. They threaten to kill Cyclone unless Scarlet lets Quake have his way with her. She gives in and he forces her to orgasm. Then he shoves her to her knees and fucks her face.

The queen makes sure Cyclone sees his girlfriend pleasuring another man, and she turns Cyclone. When Quake is through with Scarlet he sends Cyclone in. Cyclone is angry and realizes Scarlet is no heroine, she’s nothing but a slut, so he decides to fuck her until he’s sick of it. With Cyclone turned against her, Scarlet’s fate is sealed as the new sex toy for the Dark Queen and her friends.

Got some arousing peril transpiring, excellent!

She’s definitely hot, and the entire outfit looks sexy on her. That said, really need a trailer before making a purchase.

Alex–Please come back and star in a film yourself. We need you.

Only reason to pick this up is if you are a Coco fan like myself. Glad to see her in a new heroine film as she’s not been in any for a few months. There is nothing new or great about this video. At least it was reasonably priced. The lighting seemed a little odd, the actors’ skin looked a little orange.

I like Coco, so had no hesitation before getting this video. The best part of the video was, of course, Coco. She looks incredibly hot in the Scarlet costume and is defiant throughout as she tries to resist the villains until she is blackmailed into giving in to save her boyfriend. Scarlet takes a beating almost from the start. Unfortunately the fight signs a little slow and not so believable. Once she is defeated Scarlet gets fondled by the male villain. For some reason she was wearing a bra in the early part, which I did not appreciate. Later Scarlet… Read more »