Shadow Fox returns to crime fighting soon after her battle with Falcone and his mind control serum from Shadow Fox #2. This time she is chasing down Feline Fury, a nemesis of Miracle Maiden who has been causing trouble on Shadow Fox’s turf this time. 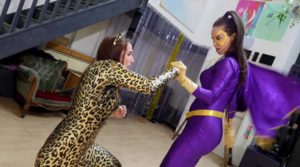 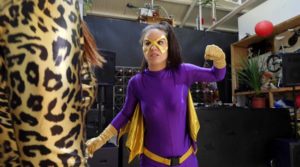 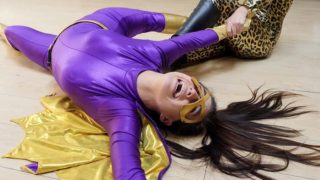 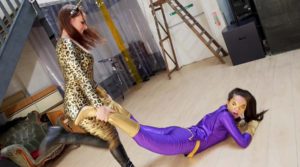 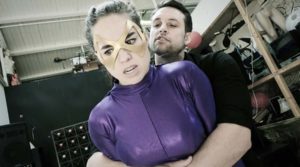 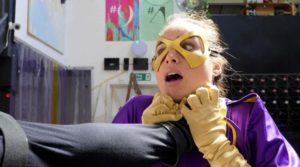 When Shadow Fox corners the cat a fight inevitably ensues, and though not clear cut, things start to go well for the heroine. However, there is one big problem… The mind control serum used against her by Falcone has not entirely worn off. She is then suggestable to the demands of Feline Fury who learns this secret just before getting taken down. This malevolent moggy then enjoys her power over our heroic Fox, allowing her to beat and embarrass the do-gooder. Can Shadow Fox snap out of the control? Or does Feline Fury have another large trick up her sleeve? 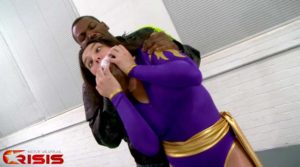 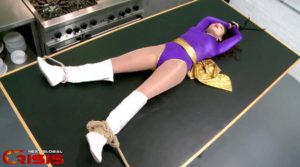 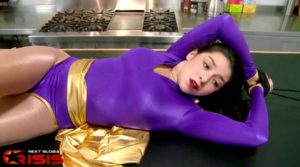 If you act quickly and get a copy of Shadow Fox #3: Catastrophic Encounter within 48 hours of receiving this email, you’ll also get unseen takes from ‘Ransom’ starring Comet Girl. Over 2 and a half minutes of Comet Girl kicking some butt but also being chloroformed and tied to a table.

I forgot to praise this release, but if you bought it there´s a back shot of Shadowfox at around 0:36 when she is dressing up that just pays for the whole video itself. Loved the one sided squash too!

I’ve enjoyed all the Action Cosplay episodes that I’ve bought and this is no exception. There’s a sprit of fan love running running through the AC series; from Supergirls’ “Bad Vibrations?” line in AC5 to Feline Fury calling Shadow Fox a ‘dominoed do-gooder’. Talking of Feline Fury I loved her meows and squeals during the fight scenes and the way she kept adjusting her cat ears. Shadow Fox was excellent too, her eyes are so full of expression and the more open mask really brings that out. There’s rich vein of material being mined in Action Cosplay and I’m looking… Read more »

I also loved the Fury’s shrieks and squeals.

Shrieks, that’s the word I was looking for!

Any chance of Shadow Fox being cradle carried in a future instalment?

Just bought it, downloading now, so I haven’t watched it. But I can already say I LOVE IT!!

This was (obviously) great. Everything that features these two ladies is a sell for me, and I really enjoyed the little twist at the end. Not to mention I feel like the Malicia/Feline Fury actress gets better with fight choreo every video.

The video also made me think it’d be fun to see a NGC subplot with a heroine hypnotized into a sleeper agent for future use. Manchurian Freedom would work nicely. haha.

I really like the combination of purple bodysuit and golden accesories on Ashleigh, it fits her figure quite well and besides that it looks that here she will sell the pain perfectly.
Sad to see the cowl go since it was kind of unique but totally justified by the explanaition given, thanks NGC for being so open about it!
Will be buying this for sure!

I’ve really enjoyed the Miracle Maiden and Super girl Action Cosplay stores, this one looks like a ‘must have ‘ too, especially with the members gift!

This purchase is worth it just for the extra material from Comet Girl’s fantastic “Ransom” video. Getting more mind control fun with Shadow Fox and Feline Fury as well? Awesome!

Seriously, two weeks in a row with “Malicia Feline” is too generous.

Nice to see Action Cosplay again..and agreed on Feline. Chrissie Chanel projects some of the sexiest malevolence I’ve ever seen!

As good as it may have looked the cowl was incredibly uncomfortable to wear, she didn’t complain but it was obviously hurting her, and with the prospect of wearing it again at this shoot for 10-12 hours I just wasn’t happy about that and brought in an alternative. As you all know I quite like having actresses remain with the project for a long time, neglecting their comfort rails against that. I hope you understand.

Jim
Reply to  Next Global Crisis

Absolutely – you look after her, she’s one of my favourites.

Heroineburgh
Reply to  Next Global Crisis

Understand completely. We have an actress who developed a mild rash reaction to her metal wrist bracelets, and had to insert foam padding underneath to prevent skin contact. You always have to keep the comfort of the actress in mind. Also, the mask looks great on Shadow Fox!

We do understand, thanks for the clarificación! Actress/actor comfort and security are a must, and luckily for us 90% of that purple costume is still intact for us to enjoy!

Really wished the Batgirl cowl was kept, you guys had the best Batgirl costume I’ve seen in a very long time. The thing i love most about the action cosplay series is that you guys parody famous superheroines.. and shadow fox just doesn’t look like batgirl without her cowl

Looks great! shadow fox is one of my favorites. Just kinda disappointed that she does not have her cowl 🙁 . Still a buy for me just not a fan of the new mask.

Gotta disagree there. The more of that beautiful face we can see, the better! A cowl would cover it up too much.

Co-sign. I didn’t mind the cowl, but I like the new mask primarily because it shows more of her face.