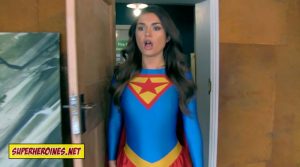 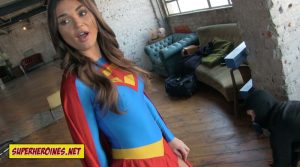 There is no love lost between Superior Girl and Sonic Girl as the two superheroines battle bad guys in their own unique way. But when a madman gets hold of a device that he uses to hypnotise and bring Sonic Girl under his control, Superior Girl is called into action. After Sonic Girl wipes out the mad man’s competition, he lures Superior Girl to his evil lair and sets up a battle between the two stunning heroines.

Purchase this video at Superheroines.net

Is that big ass studio logo on the entire video?

Who is the other girl that isn’t emma g. Has she done other videos?

There’s one other video with her and Emma g on a site called “thefemalefuture.com”.

sorry, I think I misidentified befoe. The girl wih the star on her chest is India Reynolds. I thought the other girl may have been Karolina, but I just checked and it is Emma Glover.

I bought this last week. I love it! I am far more into power, than peril. The internet is flooded with superheroine rape videos. But there are only a handful of film makers that do what Jon does. His girls are beautiful. The costumes are sexy. And he is getting much better in the special effects. If you are a power fan, please support Jon and the other film makers doing this type of work, so they can continue to do more.

This was a great video. Pure “girl power”, which is what I prefer. Only instance of “peril”, if you are into that, is when the two superheroines fight and one is knocked out for a few seconds.

By the way, JonX just doesn’t update his site very often. For the past few years, he’s only had a handful of new material. Don’t know the reason…

It does look like it’s a new video. Used to like the videos he did with Danica Thrall and Sasha Cane. It’ll be cool to check it out.

What’s up with Danica these days, anyway? I haven’t seen anything new with her in it for a while now. Am I looking in the wrong places? She was with Bluestone, last I saw.

Wow, superheroines.net doing a peril video, this is an interesting surprise! I always wished they would do some peril stuff, glad to see it’s happening! Interested to see if there will be any reviews of this video here as I am a little reticent about buying it before hearing the opinions of some of the Heroinemovies ‘oldtimers’

What’s an interesting surprise is that superheroines.net released a video. Period. Jon is the most notorious nondeliverer of videos in the genre.

He is? I bought some stuff off them and it got delivered via download immediately. Hm. Maybe you have just seen Soylo A Star Wars Story and are in a bad mood?

Bert is correct. Back in superheroines.net’s heyday, it was just … bad business. Great content, but it wasn’t run well, and a lot of people got pissed off, and rightfully so. Things got ugly. Eventually, all activity stopped on the site for a while.

That was all several years ago. If things have changed, anyone is welcome to chime in share their stories. As for myself, as good as this video looks, I’m going to maintain a “buyer beware” attitude, and wait to see what others experience before buying.

Huh? I stand corrected if this is your experience. I bought some of their stuff and never had an issue with them. But again: if this what happened, thanks for the heads-up.

Isn’t he just recycling his stuff from 10 years ago for insane prices? Seems like it right now. Though this video seem to be a new production.

jon from superheroines.net may have fail his market plan for years ago..but he has some pretty models on his team and some good comics materials..he deserve to get a second luck

Are these heroines wearing pantyhose?

God I hope so, no goddess should ever be without hose.