“Starshot” from The Battle for Earth

Starshot defeated Reaper years ago, but Reaper managed to survive. His programming given to him by his creator was to kill Starshot and he has taken years to plan the perfect trap. Starshot is called to a research facility where a radiation leak has prevented a rescue operation. Instead of finding crew, she finds Reaper. After a few minutes on the station, she begins to realize the radiation is somehow affecting her, even though she’s immune. It turns out Reaper chose this facility specifically because of what it’s constructed with, and Starshot realizes too late her powers are nullified. Find out if she survives.

When do we get her again? Maybe some oral this time but keep the beat down!!

Please! Bring her back!

Please she is best 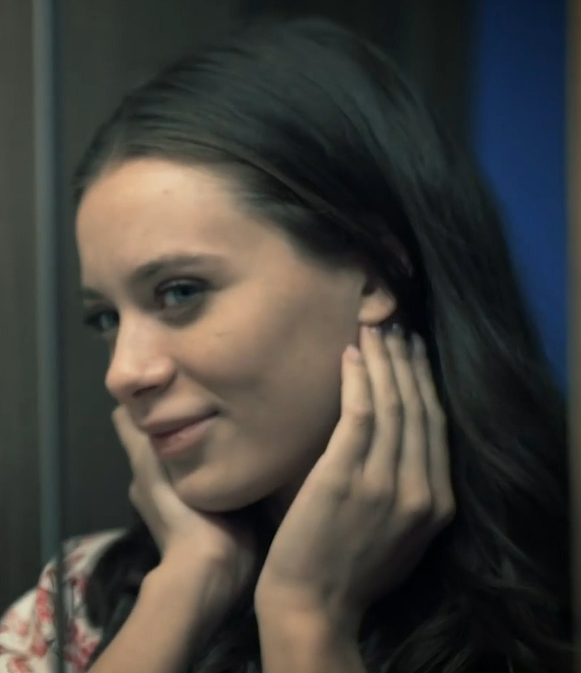 Has anyone who has seen all three (I think there are three) Ophelia films released by TBFE have a recommendation of which one to buy if you could only realistically buy one?

I second that! She was so defiant in that one, which really makes the peril palpable

I’d say this one, but you can’t really go wrong with any of them.

Is there full nudity in this one?

Yes, towards the end.

I think all three are good but Power Down for sure is my favorite release of hers. There’s just a level of defiance that she brings to the role that’s so satisfying to watch come crashing down.

Even if I´m more of a fan of the classic Ms Marvel costume, I must say this costue choice is an absolute win!! Looks great on the actress and I wish we could see more like it in the future, it just has so many places where you can destroy it!

One boot off at the end would be perfect, and a sock destroyed

Isn’t that always the question? What happens to the heroine after her shocking defeat. Honestly, I would love to see someone tackle a two part project to touches on this very subject.

Ophelia really sold that well and looked so sexy in that costume. I loved the fight scene & wished it would have lasted longer, particularly the bit at the end of the fight [snapshot 2] where she’s defeated and helpless.

I’m in general agreement with the takes below. Ophelia is great. So much so that I don’t even really question whether or not I’m going to buy her videos. I see her video is release. I get my credit card ready. Easy. The premise at play here is a simple one: Heroine enters starship, finds out the starship is leaking radiation that weakens her and then proceeds to get her ass kicked. Kicked and deflowered. It’s a beatdown that’s simplistic in nature but captured really well. No shaky camera. No odd angles. Nothing too fancy. Nothing unique. Just heroine getting… Read more »

Check my custom Juggernaut from Rye Films if you like some throat punch action https://www.heroinemovies.com/juggernaut-from-theryefilms/

I’ll check it, thanks!

The Zantanna film had a lovely throat punch

Can you know when ‘Layla rylan’s
movie’ will be released?

Is there a new one on the horizon? I would love for that. There is never enough of her.

Why? Did she retire?

No just saying she isn’t in enough stuff.

More of Layla is always a good thing, especially as Sonique! Love the cocky attitude, especially when she is then taken down…and ideally sexually taken.

She needs to do another Sonique video where she is fully stripped.

From Foreplay to Power Down and now Starshot, Ophelia really sizzles. She has a super tight body, lovely face and can act. She plays the confident heroine really well and sells the peril even better.

I am likely in the minority on this, but I was a huge fan of Alexis Adams when she did a couple of films in a late-70s inspired Ms. Marvel costume. The character wasn’t exactly the same, but I loved how the costume looked on her and was suprised that we hadn’t gotten anything from any producers along those lines, since. Although, I did like one that TBFE did with Keisha Gray in the early-80s style Ms. Marvel Costume. https://www.thebattleforearth.com/purple-haze
Good to see that someone is finally picking up this character.

Oh yeah, and Keisha Gray may not have been the best actress in the genre, but damn, she was hot!

I must agree with you, even if I´m more of a fan of Carol Danvers in her black Ms Marvel costume…
Seems the holy Trinity of Wonder Woman, Supergirl and Batgirl just dominate so hard there´s little space for other heroines, even mainstream ones, in SHIP films.
I hope this one does well and encourages producers to risk it a bit more with costume choices! (and maybe catch a younger audience in the process)

Damn she is pretty. A nice welcome to the genre.

I never comment but I had to for this video. It’s easily a top 3 all-time production, imo and the best TBFE has put out. Ophelia has quickly established herself as one of my favorites in the genre, in fact, I might put her at no. 1. She really put her skills on display in this one. Has that strong, sexy, confident vibe at the start but Starshot quickly becomes vulnerable and Ophelia sells it all perfectly. Can’t wait to see more TBFE videos with her in it. Quite a find.

Any feedback on how long the beat down is vs the sexual content?

She looks like Mary Elizabeth Winstead. Both extremely hot.

You’re right! Also a bit of a Jennifer Connelly vibe for me.

unfortunately for my wallet, ophelia has become a must buy for me. purchased this instantly last night once i received the email. i wish there would have been more inner monologue/verbal acknowledgements of her defeat and humiliation (especially after the bladder release, that felt like a bit of a missed opportunity) but that’s just personal preference. overall this was great. ophelia is really a cut above in terms of acting skills, and her reactions and expressions are excellent. tbfe is far and away my favorite studio these days and almost always produce videos i enjoy, credit to them for another… Read more »

How light is the banter? The begging in the trailer is great, but is there any more in the end product?

I assume I know the answer here, but is the BR real or simulated?

Another one for the wishlist. 😉

Ophelia is such a find! Great performer and I love that she’s a bit stronger looking than other actresses while still being smoking fucking hot.

does she make it out alive? i hope not

If you buy the movie you’ll find out

Really? Why be a douche for the sake of it? Obviously that’s an important element to some people (and likewise, a dealbreaker for others) that could effect their decision on whether or not to buy the movie. Expecting a customer to blindly support whatever a studio puts out, regardless of the content, is moronic.

Death endings kill the movie for me. For example, I’d rather pay extra for a XXXTREMECOMIXXX labeled clip than the very same clip with a death ending from their label PKF. That is something I want to know before I buy the video.

No. I don’t want to buy it if there’s a death ending. It’s fine if thats what you like, but I shouldn’t have to buy it to find out if I’m going to be put off by the ending.

I’m really not looking for an argument here, but I’ve never understood the whole “won’t buy if death ending” thing. If the rest of the content is to your liking, just don’t watch the end.

I’m not into the heavy sexual content that many videos end with. I just don’t watch those parts. If the entire second half of a vid is sexual stuff, I wait for a sale to pick up that particular vid.

lol is this a serious comment? so if people want that ending, they should pay $40-50 and then use their imagination for the ending they want?

Hmmm I’d argue just saying don’t watch the ending is not a good point. Everyone knows Jack dies at the end of Titanic. The context is there. It changes the entire movie on second viewing. You can not watch the ending, but it doesn’t change the fact in the back of your mind Jack dies. Something similar happens with heroine movies. Personally I love the ones where the heroine doesn’t die. A few I won’t name the heroine gets up at the end after seemingly being killed or pulls off some miraculous victory. If I like the character, and enjoyed… Read more »

exactly, in a forum full of stupid comments, Bert’s is top 3 all time…

I wouldn’t have guessed that the narrative arc of a specific SHIP video would be so important to some viewers. I love it when effort is put into telling some sort of story in these videos, but the peril elements are still my main focus. It kind of fascinates me that just knowing there’s a bad end, even if you don’t watch it, spoils things for some people. Thanks for the thoughtful reply.

I took hughmungus77’s comment to mean he doesn’t want to be surprised by an ending that might squick him. Asking for clarification to make sure you’re not going to get squicked is legit.

Yeah that’s all I’m saying… I want to know beforehand or I’m not going to consider buying the film. This was marketed as “find out if she survives”, but honestly, if you’re trying to appeal to that fetish, you should probably tag it that way, at least I will know to avoid the end of the movie. The people who like that fetish probably want to know too.

Are you gay or just fucking around?

I am with you Bert. people that demand to know the ending before they buy are just silly. People that refuse to buy because the last 60 seconds aren’t exactly what they wanted are idiotic. The people that post here really are a special type.

I agree with you in principle, this was more a response to Sandwich’s comment. We can’t avoid content if we aren’t warned. People asking for the the ending aren’t trying to spoil the film for themselves or others. They just want to make an informed decision. I think it should be in the video tags, same if you would put foot fetish content or g/g or some other fetish. I might still buy it, but if I have to guess, that is no bueno, especially at the current pricing levels.

I’m just the opposite. I prefer an emphasis on sex, with just a little violence as prelude. Life is interesting, and variety is good.

She’s killed from Reaper crushing her rib cage with his foot, but there isn’t a ton of time spent here.

Is that the intent? I got the feeling that she lost but survived. During the close ups she’s visible breathing in all of them and there’s a close up of her face where you can, and I’m not kidding or exaggerating, visibly see her pulse in her neck. I thought the intent of the photography was to show that she was alive.

Any ETA on Madi Redwing? That’s the one I’ve been looking forward to forever. Looks epic!

And as long as we’re on the topic of videos we’ve been anticipating, I’ll throw out a request for the release of Blair as WW 🙂