“Super Blacked Out” & Other New Videos from Jacquelyn Velvets 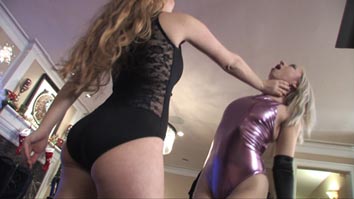 We fade in as the lovely Kayla Lael gets a distress call detailing a dangerous hostage situation nearby. Kayla acts quickly, turning into her superheroine alter-ego, revealing a sexy pink one piece, boots, gloves, and a mask. She rushes to the scene of the crime but finds no one. Kayla has very little time to investigate, however, after she takes a sudden flurry of super-speed and nearly invisible punch attacks that leave her stunned and dazed on the ground.

A set of black boots materialize in front of Kayla’s body, attached to what appears to be a sexy villainess (played by Miss Velvets). Kayla looks up and recognizes her. “BLACK VELVETS!” she yells…standing up to attack. She tries to punch her but the evildoer disappears only to re-appear
behind her and trap her in a brutal head squeeze. Kayla’s eyes roll as she sags and eventually falls into a deep state of unconsciousness, thus sparking off one hell of a trap! The devilish Velvets tortures Super-Kayla, crushing her in a test of strength and repeatedly knocking her out with a set of impressive and super-powered attacks. She uses everything from a boot choke to a tight reverse bear hug (and more) to put the overmatched heroine out, capping the night off with a knee strike and uppercut to the jaw that leave Kayla out cold and carried away over her shoulder for what’s sure to be a night filled with more torture: Black Velvets style! 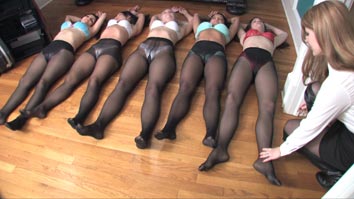 We fade in on agent Jacquelyn Velvets taking new orders from her boss Victor. Her mission is to infiltrate a safe house occupied by rookie agents Bambi Buttons, Jinx, Arielle Lane, Hannah Perez, and Alisa Kiss in order to test their skills and see if they’re ripe for a complete training regimen!

Velvets easily breaks into a house and goes on a knockout spree, taking each girl out one at a time with karate chops to the neck and eventually de-booting them for some perfectly applied panty hosed foot pressure point KOs. Miss Velvets recruits the lovely agent Buttons (who she shares a history with) and the two start tormenting the other agents with multiple knockouts with some post KO strip-downs to their sexy lingerie. After an epic set of quadruple KOs in the bedroom, the head-strong agent Buttons is betrayed by Velvets, who knocks her out, strips her down, and leaves all five ladies lined up at her feet as she calls her boss. She tells him the girls are just not ready yet, smiling as she leaves a sexy sleeping quintet on the ground! 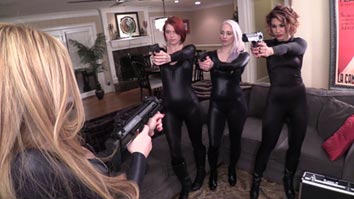 We fade in on four deadly clone assassins on a mission to infiltrate a house. Their goal: to take down whomever and whatever stands in their way of the prized files that are hidden somewhere in the house. To find it, each clone will have her chance at taking down her fellow assassin by sneak attacks, barrages, and stick ups all ending in cold blooded massacres.

In the end it’s Velvets who gets the upper hand on her fellow clone assassins by using a secret weapon: a machine gun that takes the last of the clones down for good; allowing Velvets to leave the scene victorious over a heap of sexy lifeless ladies.

Immerse Yourself with: Super Ela 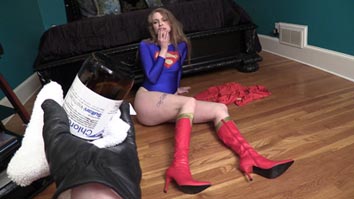 As you slowly open the bedroom door you intrude on the unsuspecting Super Ela, who immediately recognizes you and jumps at the chance to take you on again. “Didn’t have enough of me from last time?” she scoffs, as she throws vicious super punches that leave you dazed and unable to fight back.

You find yourself beneath her feet as she mocks you. You’ve been waiting for this moment, however, you’ve revealed your secret weapon: a shard of kryptonite that instantly weakens the overconfident superheroine! You give her some brutal punches to her belly and face that eventually knock her out, leaving her in a heap on the ground. With your trusty kryptonite by your side, you wake her up and deliver a series of knockouts, stripping, and rag dolling…until you’ve decided that it’s time to tie up this feisty girl in the basement so you can continue your personal brand of sleepy torture!

And continue you do…with more blows to her belly of steel, a tazer that makes her super woozy, and a final hypnosis KO that lays this superheroine to rest, that is, until you command her to wake up for even more sleepy fun!

Looks like the days of Super Ela’s power, confidence, and status as the city’s most powerful heroine…are OVER!