“The Finisher” from The Battle for Earth 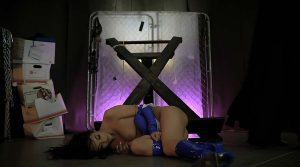 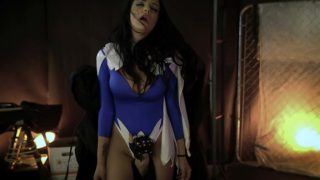 Synopsis: Swan has been tracking a known crime boss, Frankie Falcone, and has become a real headache for Frankie’s distribution network, interrupting several recent deliveries and confiscating his product. He’s had enough and contacts the heaviest artillery he can think of, a hitman named Proxies. Because of his perfect record on jobs, he’s become known as The Finisher. Proxies takes his time surveilling his marks, and once he’s accumulated enough information, only then does he take care of business. Swan is special though. Her strength, cocky attitude, and resilience have intrigued him. he still plans on finishing the job, but what if he could somehow break her and convince her to operate by his side. As planned, he lets her track him down and the fun begins. Swan holds but Proxies is simply stronger, better trained, and more equipped. Swan has two choices. She can give in to his offer and go through his “boot camp”, or she can resist and risk death. A heroine never gives in…

I just watched it and I found it ok, I agree that sofi is a stunner but I don’t know something about her hair do doesn’t do it for me, but overall she is a stunner and the costume fit her phenomenally! I thought the fight scene was good, some nice variety in the moves which I hadn’t seen before. As I said in my preview it had the right balance of physical and sexual peril and, even though I am not a storyline buff in such videos, they did a good job of setting a solif narrative. I did… Read more »

Picked it up. It is short and sweet. Sofi Ryan is a knockout. Very beautiful. The fight scene is something else to behold. Have not seen a peril vid in which two actors show this kind of athleticism you would see in figure skating. Of course it helps that Sofi has a body to die for, I would imagine. Major props to them for pulling this off. Yes, there is some (very little) interior monologue. Hopefully she will be back soon is all I can say.

I should also add, since I was critical of this in False Idol: Sofi has improved a lot in her acting. There is a scene in which she shows utter contempt and that feels very real (i.e. well acted). Also, there are a few lines of funny and self aware humor which I really liked. Felt like a kinky twist on a Marvel movie all of sudden. Bring her back, please!

by the way, this looks great. I’m going to have to pick it up.

Why on Earth do people like inner dialog???????? I agree with Harrison Ford, inner dialog in movies is only for lousy actors or lazy directors. A good actress will convey what she is feeling without having to resort to inner dialog. “Ouch, he’s crushing my back.” Yeah, I can see that. “Oh he’s hurting me.” Yeah, I can tell. “Oh no, he’s taking my powers…” DUH?
I will never understand the appeal of inner dialog. IMO inner dialog is a vehicle to make sure you realize you are watching people act something out as opposed to watching anything real.

Sam B
Reply to  Tim Caine

I like inner dialog! It helps with identifying with the heroine. Makes it sexier. And of course I realize that I am watching people act.

I think it’s having the heroine admit something she wouldn’t verbally. And there is a HUGE difference between inner dialogue in a movie and inner dialogue in a fetish video. Are we seriously comparing our superheroine fetish videos to Hollywood’s attempt at Oscar-worthy cinema? Are we to compare the performances of the best actresses in the business to the performances of models who are willing to take on superheroine roles? In no way am I disparaging anything from our genre here, nor do I hold Hollywood in high regard. But the above reference to inner dialogue isn’t meant for this… Read more »

Hearing a heroine admit to herself that she’s utterly failed is amazing. I don’t want her to say it outloud to placate her aggressor. I want to hear her admit it to herself, her thoughts. That she realizes that her defeat is real, that her defeat has utterly shocked her to her core self and that she knows she has failed.

First of all, other than in perhaps X-Men First Class, there is no “inner dialog”. This would be “interior monologue” and it comes from literature i.e. the author lets you “hear a character’s thought / thought process”. Often in a seemingly unstructured stream. When books got turned into movies, they tried to keep some of that. While true, movies should always show and not tell, it can be done in a good way. Very often through voice-over narration. While I do not like it in peril movies (some fans do, and this is fine), it can be used to great… Read more »

Its a fetish, not everyone has it.

Sometimes we don’t want the medium we’re consuming to stick to its own conventions. Sometimes we want it to invoke another medium.

Sometimes we don’t want real, or natural, or conventional.
Sometimes we want arch, exaggerated, or pointed.

Thank you for sharing your opinion, and for considering the opinions of others.

Any inner dialogue in this one? And when does it happen? Thanks!

Instant buy, no two ways about it. I have for a while hoped that TBFE would release a video which is more into the beatdown than the sexual abuse, and this seems to be right up that alley. Very interested in it and will definitely be buying it.

Couldn’t agree more. I love the work TBFE does and I’m not against sexual peril, but I like it to be maybe 20-25% of the whole video. With a lot of videos nowadays being customs I can understand why some are more sexual peril heavy, but man – it’s great to see the videos out recently that strike a good balance of all the different elements of the genre(Public disgrace 4 comes to mind). Definitely looking forward to this, and Sofi Ryan looks great

I was wondering what people’s thoughts were in regard to makeup. I find that very little is needed from what I’ve seen over the years—these women are beautiful and very little accentuation is needed for the filming. If I may put this out there—and I don’t mean to be rude in any way—but it seems that a few of these new releases (from this video to what I saw in preview pics of the upcoming Rye videos) have the models wearing what I would consider to be too much makeup. I don’t think we’ve had any comments on the topic,… Read more »

I agree. It’s totally personal but I like a heroine who looks like she’s ready to fight, not model (even though she has the looks).

Makeup on for me to be honest

Make up is the bomb, even when you think a model isn’t wearing it. She probably is. If thats what they wanna do let them do their thing lol

Makeup is a mask.
Makeup can be war paint, or otherwise used to present an image or elicit a reaction.
Makeup originates from efforts to look youthful and healthy.
Some performers come to this fetish genre having well-established looks, including makeup style. They may not want to take on a different appearance — or they may just not think about it and do what they do.

Unless a heroine’s costume is deliberately practical, I prefer a more dramatic look. This genre trades in melodrama. But a particular style of makeup is not a key thing I’m looking for.

She is smoking hot

Agree. Liked her WW vid a lot. What she is – or was – lacking in the acting department she makes up for in – pure hotness.

Whats the WW vid she did?

This girl is super hot, I can’t wait!